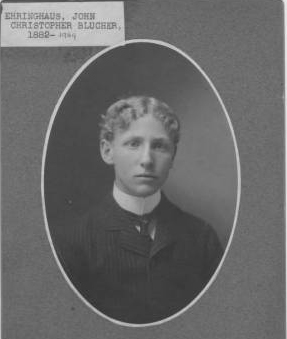 John Christoph Blucher Ehringhaus, legislator, solicitor of the First Judicial District, and governor of North Carolina during the early New Deal, was born in Elizabeth City, the son of Erskine and Catherine Colville Matthews Ehringhaus. His father was a leading merchant in Elizabeth City and later head of the bookkeeping department of First and Citizens National Bank. His mother died when he was ten years old. On both his mother's and his father's sides, the family dated back to important leaders in the Revolutionary War, though his Ehringhaus ancestors emigrated in 1812 from Germany to Elizabeth City where they became involved in banking.

Ehringhaus attended schools in Elizabeth City and was graduated from Atlantic Collegiate Institute of that city in 1898. At age sixteen he enrolled in The University of North Carolina, where he obtained a bachelor's degree with Phi Beta Kappa honors in three years. He remained at the university to study for a law degree, which he received in 1903. Admitted to the bar in the same year, he returned to practice in Elizabeth City. In 1905, he won election to the North Carolina House of Representatives as a Democrat from his native Pasquotank County. He continued to serve for two terms, leaving the house in 1908. While in the legislature, he was coauthor of the bill creating East Carolina Teacher's Training School, which later became East Carolina University. He also supported legislation creating a high school system for the state. Both bills presaged his great interest in education, an enduring concern when he later became governor.

In 1910, Ehringhaus was elected solicitor for the First Judicial District, which included the counties of Currituck, Camden, Pasquotank, Perquimans, Chowan, Gates, Tyrell, Dare, Hyde, Beaufort, and Washington. Reelected twice, Erhinghaus served in this capacity until 1922. Meanwhile, on 4 Jan. 1912 he had married Matilda Bradford Haughton, the daughter of Thomas Benbury and Susan Lamb Haughton. His wife's father had been an Episcopal minister and chaplain in the Confederate Army. The couple had three children: John C. B. III and twins, Haughton and Matilda.

For the remainder of the twenties Ehringhaus busied himself with his flourishing law practice and with civic duties, including the Masons, Odd Fellows, and Elks; and with work for the Democratic party. In 1925, he was active in obtaining a toll bridge to link his native Albemarle area more closely to the rest of the state and to reduce the area's dependence on Virginia, its natural neighbor. He campaigned for Al Smith's candidacy for president in 1928 and for O. Max Gardner, who was elected governor of North Carolina in that year.

In 1932, as the state experienced increasing economic difficulty, Ehringhaus began a campaign for governor with the support of Gardner, an association that led him to be identified with the "Gardner Machine." With A. J. Maxwell eliminated in the first gubernatorial primary, Ehringhaus then won a heated runoff against Richard T. Fountain. In the fall, he defeated Republican Clifford Frazier by the largest majority accorded a Democratic nominee up to that time.

As governor, Ehringhaus was noted for his support of economy in government, of creating a state sales tax, and of the state assuming financial responsibility for the public school system. His stern insistence on economy in government led to an early cut of the budget by nearly one-third. He inherited a deficit of $15 million in the state treasury but left office with a surplus of $5 million because of his successful battle for a three-percent sales tax in the 1933 session of the legislature. The sales tax provided the necessary funds for the state government to assume the financing of the public school system; Ehringhaus guaranteed a public school education on an eight-month basis for all children in the state. The state's assumption of educational expenses allowed local governments to reduce property taxes and to have sufficient funds to support local government debts. Ehringhaus had inherited a state in which bonds were selling at 60 to 75 percent of face value; he shortly restored the full credit of the state so that bonds could be issued at the lowest rate ever (3.76 percent), thus saving the state hundreds of thousands of dollars in interest. Greatly criticized for his monetary policies, he was so unpopular when he left office that he probably could not have been elected to another position.

Aside from the economy, however, Ehringhaus helped to maintain the educational system at a time when other states had to close schools or pay teachers in temporary scrip. No schools had to close in North Carolina, nor did teachers lose their pay. Moreover, Ehringhaus established a rental system for state textbooks and inaugurated busing for students within one mile of rural schools. He brought reorganization to the prison system, combining it with the highway department and making it self-supporting through the work of prisoners on the highways. He inaugurated a modern parole system and improved the facilities at Central Prison. He also had the highway department purchase the lime deposits in the state in order to provide essential lime to farmers at lower prices. He supported the Rural Electrification Association and saw North Carolina build 4,000 miles of the first 6,000 miles of REA lines built in the nation.

Efforts of the tobacco farmers to raise prices for their crops created repeated crises for the governor. In 1933, he closed all tobacco warehouses until a price system could be worked out under federal statutes. In 1935, he resisted pressure for a special session of the legislature to pass a state compact law for tobacco.

His resistance to a special session of the legislature in 1935 and 1936 was primarily motivated by his fear that the General Assembly would repeal the carefully nurtured sales tax. Also a factor was his long feud with the Social Security Administration to gain acceptance for a state unemployment insurance plan, which did not technically comply with federal statutes. Finally, faced with the certainty that state unemployment taxes would be lost to the federal government, and assured of the election of his successor Clyde Hoey, he called the legislature into session in the waning days of his administration.

Thus, Ehringhaus emerged from his term dependent on perspective to vindicate his efforts. Although in 1937 he briefly served as assistant attorney general of the United States to prosecute some special cases, he soon settled into private practice without seeking other elective offices. The Ehringhauses bought a house in Raleigh where with his son, J. C. B. Ehringhaus, he maintained a law practice until his death. In 1946, he moved from his home to a suite in the Sir Walter Hotel. He died there of heart failure three weeks after suffering an acute attack of rheumatic fever. His funeral was held at the Episcopal Church of the Good Shepherd, Raleigh, attended by overflow crowds. Like the relative simplicity of his life, his funeral bore no special trappings. He was buried in the Episcopal cemetery, Elizabeth City.

Ehringhaus had been anxious to promote the publication of his official papers. Although prepared in 1940, they were not published until 1950 after his death. The Ehringhaus papers are held in the North Carolina State Archives in Raleigh; his correspondence with other prominent people of his time appears in related collections in the archives and other North Carolina manuscript collections. Although many portraits of him can be found throughout the state, a special portrait was hung in the legislative building in 1960.

Since I live here in Eliz.

Since I live here in Eliz. City. I found this so interesting.

Thank you so much.