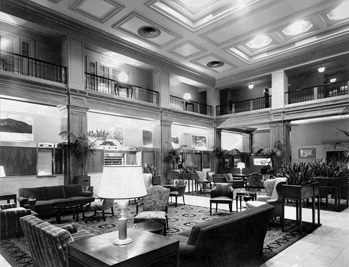 The Sir Walter Hotel, built in 1922 on Raleigh's Fayetteville Street, was part of a large boom in Raleigh's development during the 1920s. Gen. Albert Cox and Josephus Daniels's Capitol Construction Company built the hotel for $750,000. B. H. Griffin, owner of the famed Yarborough House across the street, became a partner and ran the hotel. For many years the Sir Walter Hotel was the preferred location for political gatherings, weddings, debutante balls, and parties of all types. The Sphinx Club, a "gentlemen's retreat," thrived in the hotel as well. Political campaigns and associated events, such as the Jefferson-Jackson Dinner, always took place in the hotel. In the 1960s, the hotel's role as "third chamber of the legislature" and "in" place for social gatherings declined with the expansion of the legislative building in Raleigh and the emergence of the Velvet Cloak Inn and other hotels.

The Sir Walter Hotel can boast its share of intriguing stories and memorable events, perhaps the most publicized of which was the Kluckhorn murder case of 1955. From his hotel room in the Sir Walter, Richard Kluckhorn, a textbook salesman, shot and killed Bernice Seawell of Arlington, Va, on 13 May of that year. It was later discovered that he had been "dry firing" with his gun, which went off accidentally, hitting Seawell in the parking lot across the street. Kluckhorn was convicted of involuntary manslaughter.

In 1964 the Sir Walter Hotel was sold to a corporation headed in part by John A. Williams. Williams bought out his partners and in 1967 donated the hotel to the state. The state sold the hotel in 1969 to Plaza Associates, which traded the hotel, along with other properties, to Kidd Brewer for the land on which Crabtree Valley Mall was developed. By 1979 the Sir Walter Hotel had been converted into subsidized housing apartments, and it continues to serve this function. It is currently owned by the Raleigh-based partnership Sir Walter Associates.

The Sir Walter Raleigh Hotel housed a ticket office accessed through the front door for Eastern Airlines in the 60's. My sister worked there. She reported Queen Elizabeth came and stayed there. Other interesting characters came through as well. I am fairly certain Seaboard Coastline RR also had an office there in the back of the building.

I have recently been

I have recently been researching the old Southland Speedway (aka Raliegh Speedway) and found that this old hotel was the place that sold the tickets to the opening day race, the first ever held at the Southland Speedway.
A proud day in Raliegh’s racing history.
This AAA sanctioned race was held on July 4 1952.
It was won by the 1952 Indy 500 winner Troy Ruttman.