Outgoing and cheerful, Matilda "Tillie" Ehringhaus was a breath of fresh air in the depression-era administration of Governor J.C.B. Ehringhaus. With unflagging wit and good humor, she represented a pleasant diversion from the stress and strain of public life. Matilda Bradford was born to Episcopal minister Thomas Benbury Haughton and Susan Elizabeth Lamb Haughton on October 23, 1890, in Williamston, Martin County. When Matilda was four, her father died, and the family moved to Washington, North Carolina. She later attended St. Mary's Junior College, from which she received a business certificate in 1908 and worked as a secretary until her marriage. On January 4, 1912, she married John Christoph Blucher Ehringhaus at St. Peter's Episcopal Church in Washington, North Carolina. Fol­lowing their marriage they lived in Elizabeth City, where her husband practiced law.

Because of the financial strain of the Great Depression, the inauguration was very simple. The legislature appropriated only six hundred dollars for the event. The new governor and his wife welcomed the simplicity of the ceremony inasmuch as he had only recently been released from the hospital after having undergone treatment for a kidney infection and had to return to bed immediately afterward. While living at the Executive Mansion, Tillie Ehringhaus hosted many musical evenings during which her husband played the piano and the family and guests gathered around and sang. One of the first things Governor Ehringhaus did to help the depressed economy was to reduce his own salary. 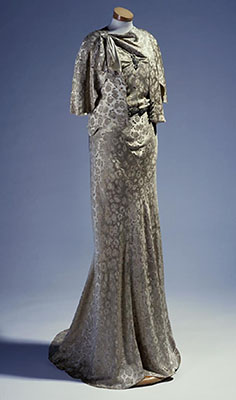 His wife immediately followed suit by low­ering the wattage in the chandeliers and almost halving the electric bill at the mansion. In order to have enough silver to serve guests, Tillie Ehringhaus, like other first ladies, brought her own to the Executive Mansion.

Tillie Ehringhaus was never a particularly political person, though she enjoyed her years at the Executive Mansion. An article published in the Raleigh News and Observer on February 8, 1957, quoted her as remarking: '"It's an experience I'm glad I had, but I wouldn't want to be a governor's wife two terms.'" In a later article that appeared in the Greensboro Record (February 13, 1962), she noted that she had viewed with alarm her husband's decision to run for governor inasmuch as she did not enjoy the limelight. In spite of her reservations, the charming Tillie Ehringhaus performed her duties with great style and made many lasting friends in the capital city. In its issue of August 26, 1933, The State magazine said: "[I)f they ever have a beauty contest among governors' wives, our Tilly will take the loving cup, or the medal, or whatever it is that they give as first prizes in contests of this nature."

While Mr. Ehringhaus was serving in the General Assembly in 1932, the family had lived at the Sir Walter Hotel in Raleigh. At the conclusion of his term of office as governor in January 1937, he and his family moved to a house on Fairview Road in Raleigh. In 1946 they returned to the Sir Walter Hotel. There the former governor died in 1949. Tillie Ehringhaus remained at the hotel for several years. Along with a friend, she edited the North Carolina Almanac and compiled the State Industrial Guide. In 1954 she moved to a small farm outside Edenton, where some of her family resided. She remodeled her house, and for a time two of her grandchildren lived with her and attended school in Edenton. She remained on her farm for twenty years before moving back to Raleigh, where she lived until her death.

Matilda Ehringhaus died in Raleigh on June 16, 1980, at the age of eighty-nine. She was buried beside her husband in the Christ Episcopal Church Cemetery in Elizabeth City.