Allen Jay Maxwell, editor, politician, and state official, was born in Duplin County, the son of Hugh Gillespie and Nancy S. Maready Maxwell. He was a descendant of James Maxwell, Revolutionary War soldier, lawyer, and judge of Duplin County. Allen Jay attended the Goldsboro Public School but was largely self-educated. He began work at age twelve as a printer's devil for the Goldsboro Argus and three years later moved to the Wilmington Messenger. At eighteen, Maxwell became editor of the Columbus County News, which he bought three years later. As editor of this newspaper, and as a young mayor of Whiteville, he waged a strident local fight for white supremacy in Columbus County.

In 1899 Maxwell became clerk for the legislature's Senate Journal and simultaneously assumed editorship of the Rockingham County Rocket and Republic, whose name he changed to the Anglo-Saxon. His editorial policy continued the fight for white supremacy by advocating the suffrage disfranchisement amendment to the state constitution. 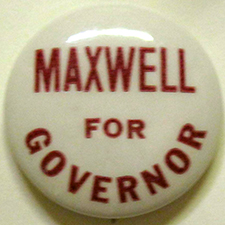 Maxwell and his four brothers established a lumber business in Craven County in 1903, but after seven years the business floundered and failed. In 1910 he became a clerk in the Corporation Commission, of which he was appointed a commissioner in 1918. As a commissioner until 1929, and as an administrator in other offices, Maxwell suggested taxation reforms that were instituted by Governor Locke Craig. He also was instrumental in establishing the Local Government Commission; worked for taxes other than property taxes; proposed the state income tax amendment to the state constitution, which went into effect in 1921; worked for the establishment of the Department of Revenue; and fought for fair railroad freight rates for North Carolinians.

Also a prominent member of the Democratic party, Maxwell was a key figure in the administration of Governor O. Max Gardner. Maxwell and other Democratic stalwarts wrote Gardner's 1930 platform even before the party's platform committee met in convention. In addition, he drew up the Gardner administration budget bill, which recommended the enactment of a small gross-receipts tax on a selected group of commodities. It was, according to a historian of the period, a luxury tax set at a low rate, which was expected to add about $3 million to the state coffers. Maxwell, an ardent opponent of the sales tax, advocated the raising of state revenues by increased income, franchise, and license taxes.

In July 1931, believing that he had the support of Governor Gardner, Maxwell announced his candidacy for the upcoming gubernatorial primary. Running against him were Lieutenant Governor Richard T. Fountain and John C. B. Ehringhaus. Too blunt to be a politician, Maxwell campaigned on a straightforward platform of retrenchment and readjustment of state revenues. According to him, state spending, the salaries of both legislators and state employees, the cost of higher education, public school "extravagance," property taxes, and governmental "mismanagement" must all be reduced if the state were to survive the burdens imposed by economic depression. Considered to be the candidate of the conservatives, Maxwell lost the primary to both Ehringhaus and Fountain as a result of his positions on the issue of economy.

In 1940 he again ran for the executive office, this time against Democrats J. Melville Broughton and Lieutenant Governor Wilkins P. Horton. Generally regarded as a strong contender in the 1940 race, Maxwell suffered a debilitating stroke shortly before the primary vote. Overcoming the paralysis after the election, he was reappointed commissioner of revenue in 1941. In 1942 Governor Broughton named him director of tax research, a position he filled until his death.

Maxwell married Della Ward on 20 Apr. 1892, and they had five children: Justin, Raymond, Hazel, Allen Jay, Jr., and Harold. After the death of his wife in 1933, Maxwell married Minnie Bradshaw.