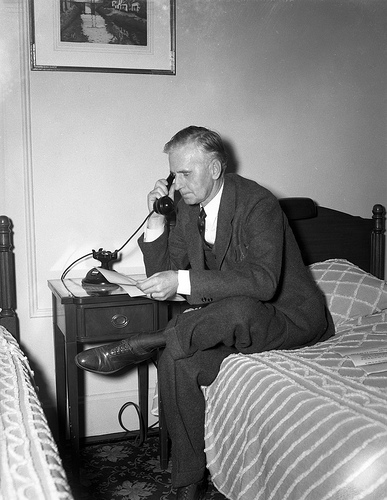 Wilkins Perryman Horton, state senator, lieutenant governor, Democratic party official, and Superior Court judge, was born in Kansas City, Kans., the son of Thomas B. and Mary E. Wilkins Horton, who moved to Pittsboro, N.C., when Horton was three years old. His father, born in Virginia, was a livestock dealer and farmer who saw Confederate service during the Civil War. Young Horton grew up in Pittsboro, received his early education in the Chatham County public school system, and attended Draughn's Business College in Raleigh and, from 1912 to 1914, The University of North Carolina where he received a law degree. He worked hard, financed his own education, and in 1915 began a law practice in Pittsboro with H. R. Haynes.

Horton began his political career in 1918 with his first term as state senator from the Thirteenth District. While a senator, he also was Chatham County attorney and for one term was president of the North Carolina Railroad. In 1935 Horton left the senate to run for lieutenant governor and was elected. He served under Governor Clyde R. Hoey until 1939, when he decided to run for governor; at the end of his term as lieutenant governor, the North Carolina Senate commended him for his just leadership and organizational prowess. Finishing second to J. Melvin Broughton by about 40,000 votes, Horton declined a runoff when the third- and fourth-place candidates in a field of seven threw their support to Broughton, citing as his reasons party harmony and the war in Europe. His platform in the race showed him to be a supporter of fair taxes, economical government, better public schools, higher teachers' salaries, resource development, improved libraries, and wildlife conservation. Horton also favored state compensation for children injured in school bus accidents, social security, and better pensions for Confederate veterans. He founded the state commission for the blind. Although the issue was not mentioned in his platform, Horton advocated the prohibition of alcoholic beverages.

After losing the election, he practiced law in Pittsboro with Daniel L. Bell, his former campaign manager, and Harry P. Horton, his adopted son. Tragedy struck in 1943 when Horton's wife, the former Casandra C. Mendenhall of High Point, died. Nevertheless, he reentered public life in 1944 when he was elected Democratic national committeeman. Horton resigned that post in 1947 to become chairman of the North Carolina Democratic Executive Committee, where he served ably until the following year when he relinquished the position to Capus Waynick, the campaign manager of Governor W. Kerr Scott. There had been speculation that Governor R. Gregg Cherry would appoint Horton U.S. senator, but he received the chairman's job instead.

In the spring of 1949, Governor Scott appointed Horton Superior Court judge, a position for which he was reportedly well qualified. He assumed the bench in July but only served until December, becoming ill during a session of the court; he was taken to the Pittsboro Hospital and later to the Duke Hospital. Horton died at home after an extended illness and was buried in the Pittsboro Methodist Church cemetery.

A Mason and a Shriner, Horton was Grand Master of the Grand Lodge of North Carolina and past master of the Columbus Lodge of Pittsboro. At the time of his death, he was chairman of the Chatham County Democratic Executive Committee, chairman of the Chatham County Infantile Paralysis Foundation, and vice-president of the North Carolina Infantile Paralysis Society. He was survived by his adopted son Harry and by his brothers W. B. and D. W. Horton.

"The following is the full text of the platform of Lieutenant Governor Wilkins P. Horton, candidate for the Democratic nomination for governor of North Carolina." Wilkins P. Horton. WorldCat: https://www.worldcat.org/title/following-is-the-full-text-of-the-platform-of-lieutenant-governor-wilkins-p-horton-candidate-for-the-democratic-nomination-for-governor-of-north-carolina/oclc/676694252