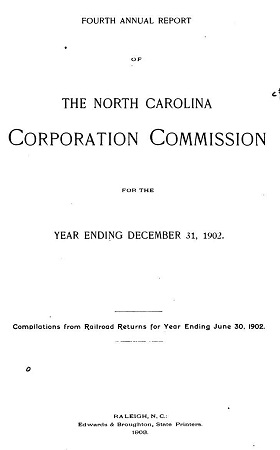 The North Carolina Corporation Commission was the principal state agency for the regulation of railroads, banks, and electric utilities from 1899 to 1933. Created by the General Assembly of 1899, it replaced the Railroad Commission (1891-99). The move represented one of many efforts by state Democrats to secure their hold on political and economic power in the early twentieth century. It allowed them to wrest authority over banking, as well as railroads, from the non-Democrats in the state treasurer's and auditor's offices.

The most significant additions to Corporation Commission authority after 1900 resulted from the introduction of urban electric, gas, and sewer services, as well as the development of motor vehicle transportation. In 1913 the legislature required the commission to fix rates for electric, gas, and sewer services, except for providers owned by municipal governments. In 1925 the commission was also directed to set rates and service conditions for new motor vehicle carrier operations, both passenger and freight. In the same year, it had to supervise the state's Capital Issues Act, which regulated the sale of many investment securities, including stocks and bonds. Despite its new responsibilities, between 1901 and 1930 railroad rate issues dominated the commission's work.

Both the growth in regulated businesses and the shocks of the Great Depression, including public dissatisfaction with the regulation of utilities and a desire to cut costs, led to the demise of the Corporation Commission. In 1931 legislators stripped the commission of its authority over banks-in large part as a result of criticism of the commission's role in the increasing number of bank failures. In 1933 the General Assembly abolished the Corporation Commission altogether and replaced it with the office of utilities commissioner, a post held by one elected official. Two associate commissioners, appointed by the governor, served at the commissioner's request. The 1933 legislature also rewrote many of the former commission's powers over utilities, particularly regarding the issuance of securities.

I received a letter from the

I received a letter from the SSA about a potential retirement benefit. I cannot locate the plan administrator and the employer is deceased. The year reported is 1980. This agency was recommended as being able to help. Thank you.

I am a widow since last July.

I am a widow since last July. I have been trying to get the money from my deceased husband’s brokerage account at Wells Fargo thru their Estate Department since August 2021. I have called and sent in the documents 5 times including death certificate, affidavit, and letter of request. I have visited a branch in Charlotte, NC and a representative sent them the same documents in December 2021 again. It has been 2 months now and I have heard nothing. I don’t know what to do at this point. How many times must I send in the information they ask for and it never gets processed. No one should go thru this type of harassment; especially a widow and especially in establishment where trust is paramount. Thank you

I'm very sorry that you're having to deal with this.

Below are other departments and organizations that might be able to provide assistance:

Who can I speak to about car

Who can I speak to about car repairs I paid for that were not done correctly?

I suggest filing a complaint with the Better Business Bureau (BBB). Their website is at https://www.bbb.org/ and a link to fiule a complaint is about a quarter of the way down the page, if that much. You could also file a complaint with the NC Department of Justice. https://ncdoj.gov/protecting-consumers/#:~:text=If%20you%20think%20you've,file%20a%20consumer%20complaint%20online.