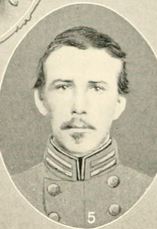 Charles Mather Cooke, state legislator, superior court justice, and North Carolina secretary of state, was born near Louisburg, the second son of Jones Cooke, a planter, and his third wife, Jane Ann Kingsbury. Charles's grandfather, Thomas Cooke (1700–1801), emigrated to the Louisburg area from Surry County, Va., and married Arabel Conyers, a Franklin County native. Charles's father, who at one time owned over eighteen hundred acres of land, commanded a company of Franklin County volunteers in the War of 1812 and served for many years as chief justice of the Franklin County Court of Pleas and Quarter Sessions. An active Baptist and moderator of the Tar River Baptist Association (1835–41), Jones Cooke reportedly exercised great influence in organizing the North Carolina State Baptist Convention and in founding Wake Forest College. Jane Cooke, a schoolteacher from New Hartford, Conn., was a daughter of Darius Kingsbury, whose wife, Esther Mather, was descended from Timothy Mather, brother of Cotton.

"Charlie" Cooke, as he was familiarly known, attended Louisburg Male Academy and in 1860 entered Wake Forest College, where he studied for two terms. On 12 May 1862 he enlisted in the Franklin County Farmers, a volunteer company later incorporated as Company I in the Fifty-fifth North Carolina Regiment. Commissioned second lieutenant on 11 Mar. 1863 and promoted to first lieutenant on 1 June that same year, he assumed active command of the company after its captain was captured at Gettysburg. He was detailed as regimental adjutant in June 1864 and served in that capacity until 31 Mar. 1865, when he was severely wounded in action at Hatcher's Run, near Petersburg, Va.

Paroled after Lee's surrender, Cooke returned to Louisburg, and began reading law. Admitted to the county bar (January 1867) and the state bar (January 1868), he entered practice first in partnership with Joseph J. Davis (1828–92) and then, after Davis's election to Congress in 1874, with W. H. H. Spencer. Cooke quickly gained a reputation as an effective and flamboyant trial lawyer with a particular talent for equity cases; throughout the 1880s and 1890s, he supposedly had the largest clientele of any practicing attorney in the Sixth Judicial District. For a time, he represented Patty D. B. Arrington, plaintiff in the celebrated "Peedybee cases," a long, bitter, and complex property suit that at various times involved Charles B. Aycock and Spier Whitaker as attorneys and that was finally investigated by a special committee of the General Assembly in 1895. In 1889, Cooke was counsel for Dr. Eugene Grissom, the superintendent of the state insane asylum, who was charged with mistreatment of inmates and mishandling of state funds. In 1901, Cooke was one of the attorneys representing Supreme Court Chief Justice David M. Furches and Associate Justice Robert M. Douglas in their impeachment trial before the state senate.

At the same time, Cooke, a Conservative/Democrat, pursued an active political career. In 1868 he ran unsuccessfully for the state senate from the seventh district. In 1872 he was a delegate to the Democratic National Convention. In 1874 he was elected to the senate, serving one term, and from 1877 to 1878 he was solicitor for the Sixth District. Appointed by Governor Thomas J. Jarvis to the state board of internal improvements in March 1879, he played a major role in the state's sale of the Western North Carolina Railroad, before resigning in August 1880. From 1884 to 1888 he was a member of the board of directors of the state prison.

Cooke's main political activity, however, was in the state house of representatives, in which he served three terms (1879–83, 1889–91). In 1879 he became chairman of the Judiciary Committee, and in 1881 he was elected speaker. In 1889, after reportedly declining the speakership, he served as chairman of the Committee on Internal Improvements and as vice-chairman of a conference committee on the establishment of a state railroad commission, becoming a central figure in that year's heated debate over railroad regulation. The original measure, establishing a state regulatory commission with far-reaching powers, was killed, and Cooke, who sided with the pro-regulation forces, introduced a bill requiring railroad companies to submit annual reports of their financial transactions. Cooke's bill passed the house, and although it failed in the senate, it established a precedent for much of the later regulatory legislation.

Cooke's lifelong ambition was election to the U.S. House of Representatives, a goal that always eluded him. In 1886 he was Franklin County's favorite-son candidate in a five-way race for the Democratic nomination in the Fourth Congressional District; he withdrew, however, in favor of John W. Graham of Orange County. His withdrawal caused a rift lasting for a generation between the Democratic organizations of Nash County, who saw it as a dirty deal against their candidate, and Franklin County. In 1894 he won the Democratic nomination but was defeated in that year's Fusionist landslide.

In September 1895, Governor Elias Carr appointed Cooke secretary of state to fill the unexpired term of Octavius Coke, who had died in office. In 1896, Cooke ran for a full term but was defeated by the Fusionist candidate, Dr. Cyrus Thompson. Two years later, in a campaign debate with Charles B. Aycock in Charlotte, Thompson claimed that Cooke, as secretary, had failed to disburse funds collected from certain seal taxes as required by law. A few days later, Aycock produced a canceled check, endorsed by Thompson, which purported to show that Cooke indeed had rightfully performed his duties. Thompson refused to accept the check as evidence, but the matter was not pursued further, and Cooke's reputation does not seem to have suffered as a result.

In 1902, in a closely contested convention in Rocky Mount, Cooke defeated Jacob Battle for the Democratic nomination to the state superior court from the Sixth Judicial District. That November he defeated the incumbent, E. W. Timberlake, in the general election. Reelected in 1910, Cooke remained on the bench for twelve years but resigned in 1915 because of poor health. He died at his home, Northfield, in Louisburg and was buried in Oaklawn Cemetery. Originally a member of Flat Rock Baptist Church, Cooke was among the founders of Louisburg Baptist Church and served it for over twenty-five years as a deacon and Sunday school teacher. In 1876 he was moderator of the Baptist State Convention, and in 1885 he acted as moderator for the August meeting of the Tar River Baptist Association. A long-time member of the board of trustees of Wake Forest College (1871–1919) and The University of North Carolina (1892–1903), Cooke was also a member and past master of the Clinton Masonic Lodge, No. 124.

"The ablest man of his generation," in Josephus Daniels's words, Cooke was famed throughout the state for his speaking ability, wit, and personal charm. Late in his life, as he traveled the judicial circuit, he became legendary for his rotund figure, walrus mustache, and lenient and unconventional courtroom style.

Samuel A. Ashe, ed., Biographical History of North Carolina, vol. 6 (1907), and Cyclopedia of Eminent and Representative Men of the Carolinas of the Nineteenth Century, vol. 2 (1892).