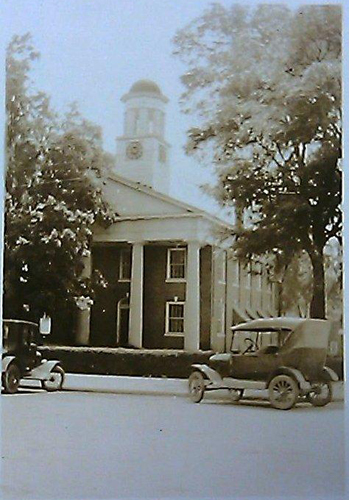 John Berry, self-taught builder-architect and Orange County politician, was born near Hillsborough, the son of John Berry, Sr., and Rhoda (Rosanna?) (Whitted?) Berry. According to family tradition, John Berry, Sr., was killed in the Battle of New Orleans.

On 15 June 1805, when her son was seven years old, Mrs. Berry purchased Lot 54 on West Queen Street in Hillsborough, where she afterward built the little Berry Brick House. A near neighbor, master brickmason Samuel Hancock, who may have built the house, gave Berry early training in the craft of bricklaying, but there is no preserved record of any formal apprenticeship. An early brick building, almost certainly built by Hancock and Berry, is the small (30 × 50 feet) Presbyterian church on West Tryon Street, begun in the autumn of 1815. The names of Samuel Hancock, Mrs. Rhoda Berry, and John Berry all appear in the 1816 pew rental list of the church. A preserved receipt of 28 Aug. 1819, signed "John Berry for Hancock & Berry," for work done on Frederick Nash's house, indicates that the two men may have been informal partners, at least in the first several years of their association. Hancock's inability to write prevented his keeping any ledgers or records of work done, and so far as is known, Berry himself kept no ledgers.

The two men are thought to have built the two-story Hillsborough Academy building in the "New Town" of 1821; the Masonic Hall, designed by state architect William Nichol, begun late in 1823 and finished in 1825; St. Matthew's Episcopal Church, 1825–26; and St. Luke's Episcopal Church in Salisbury, completed in 1828. These last several buildings directly and indirectly provided young Berry the contacts he needed with trained architects, and the Salisbury project also taught him the complicated logistics of erecting buildings at a considerable distance from home. Francis Lister Hawks, grandson of John Hawks, the English architect of Tryon Palace, was then briefly resident in Hillsborough and is thought to have introduced Berry to some of his grandfather's books on architecture. In any case, Berry became familiar with the carpenters' patternbooks of the day, on which he drew heavily for designs. His copy of Owen Biddle's Young Carpenter's Assistant (Philadelphia, 1805) has been preserved. He is said to have proved himself an accomplished draftsman, but none of the preliminary sketches that he customarily sent by letter to prospective employers has come to light.

Berry joined the Orange Guards, and the title "Captain," thereafter always given him, was apparently derived from that service. The Hillsborough Recorder chronicles Berry's growing concern with civic affairs in Hillsborough—he was repeatedly marshal of the day for Independence Day celebrations, senior warden and grand master of Eagle Lodge No. 19, A.F. & A.M., one of the managers of the Orange County Sunday schools, and a Town commissioner in 1842–47.

In the 1830s, Berry began a notable series of twelve buildings around the state: the Caswell County Courthouse in Yanceyville, 1831–33, a 60 × 40-foot structure with a 26-foot elevation, a cupola, and a dome; the two-story stone jail in Hillsborough, 1835; the Wake Forest College main building, a 65 × 132-foot brick over stone structure with a central block three stories high and two wings four stories high, 1835–37; two impressive brick faculty houses on the Wake Forest College campus, 1838; the Orange County Courthouse in Hillsborough, with Doric portico and cupola—the structure generally regarded as Berry's masterpiece—1844–45; the Smith Building (Playmakers Theater) on The University of North Carolina campus, designed by Alexander Jackson Davis and contracted for by Berry and Henry Richards, Sr., 1851; St. John's College (the Oxford Orphanage) at Oxford, a 122 × 40-foot building four stories tall with a basement, 1855–57; the Methodist Episcopal church in Hillsborough, apparently designed by Berry, 1860–61; the Hillsborough Military Academy and the Commandant's House in West Hillsborough, both designed by Colonel Charles Courtney Tew after the Citadel and built by Berry and Richards, 1859–61; and the Hillsborough Baptist Church, designed by William Percival, begun by D. Kistler, and, after various difficulties, completed by Berry, ca. 1860–70.

From about 1850 onward, Henry Richards, Sr. (1813–90), Hillsborough builder, appears to have worked closely with Berry, although he was never a partner, according to the Berry family. In earlier years, John A. Faucett, a skilled carpenter, had also been associated with Berry. As a matter of policy, Berry trained enslaved people as skilled brickmasons, tinners, and carpenters and gave them their freedom when they reached master status. Among such trained and freed Black craftsmen were "Ned my tinner valued at $2000" (later known as Ned Haughawort) and "Joe my carpenter" (later known as Joe Nichols).

Berry also either renovated entirely or did the brickwork on several dwelling-houses in the Hillsborough area, somehow fitting them into his busy building schedule. These included the Frederick Nash house (later the Nash and Kollock School), 1819; John Knox Witherspoon's Twin Chimneys, 1819; the Anne Call Cameron house, possibly built entirely by Berry and Hancock, ca. 1826; Burnside, with chimneys, a separate kitchen, and a magnificent octagonal brick ice-pit, built for Paul C. Cameron, 1835; the Peter Browne Ruffin house (earlier the Allen Jones Davie house), renovated in the late 1840s by Cadwallader Jones, Sr., including a new three-story brick kitchen; Sunny Side, Berry's enlargement and renovation of a St. Mary's Road farmhouse into a country home for himself, ca. 1846; the Burwell School, an enlargement and renovations, 1848; and Sans Souci, an enlargement of the William Cain town house, after 1856. In several renovations, such as the Burwell School and the Peter Browne Ruffin house, Berry created entirely new facades and completely reoriented houses.

Apparently Berry began as a young man to collect the sizeable library left at Sunny Side, his second and final home northeast of Hillsborough. A catalogue of the surviving segment of the library, chiefly law books, was compiled by Berry's late granddaughter, the lawyer Margaret Berry Street, who recalled the unbroken collection as having contained "a good representation of nearly all the classics."

In addition to his multiple building activities, Berry somehow found time for active involvement in local and state politics, which from the late 1840s onward amounted to an important second career. He served five terms as state senator in 1848, 1850, 1852, 1864, and 1866 and one term as state representative in 1862. He was also a member of the constitutional conventions of 1861 and 1863 and served as a presidential elector. He was also a trustee of Wake Forest College for twelve years from 1850 to 1862. Although Berry seems always to have remained steadfast in his political views as a member of the Democratic party, he shifted his church affiliation from the Episcopalian (he had been a vestryman in 1842–43 at St. Matthew's Church) to the Baptist church. He may have joined the Presbyterian church in his youth.

Berry's final building venture, in the winter of 1869–70, was a two-story brick structure in downtown Hillsborough, a combined store and ballroom, to be known as the "Berry Building." He caught a severe cold from exposure to the December weather and died of pneumonia at Sunny Side at the age of seventy-two. He was buried in the Berry plot in Hillsborough's Old Town Cemetery, within feet of one of his first buildings, the Presbyterian church. His careful will bequeathed at least 1,238 acres, 42 slaves, a number of town lots, several houses besides Sunny Side and the Berry Brick House, his library, bank stocks and bonds, $11,000 in cash, livestock, and so on to his widow Elizabeth, and the eight Berry children.

Two portraits of Berry were commissioned by the Caswell County Commissioners shortly after his successful completion of the courthouse at Yanceyville in 1833, and one of these still survives as the property of a descendant. A later daguerreotype of Berry and his wife is also in existence. In 1964 a bronze plaque honoring Berry as "a contributor to the tradition of American architecture" was affixed to the Old Orange County Courthouse, a National Register structure; and a further memorial to him is the chancel in the Hillsborough Presbyterian Church, presented by members of the Berry family in 1948.

Orange County Deed Books 13, 17, 33, 35, and Will Books E (for Thomas Vincent's will) and H (for John Berry's will) (Orange County courthouse, Hillsborough).