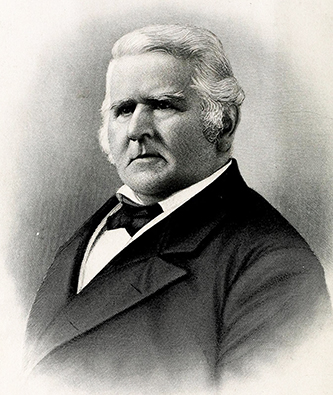 Paul Carrington Cameron, planter, agricultural reformer, railway and road builder, and friend of education, was born at Stagville, the home of his grandfather, Richard Bennehan. Son of Duncan and Rebecca Bennehan Cameron, he was named after his father's old law teacher. His own early teachers were Willie P. Mangum, John Rogers of Hillsborough, and a Dr. McPheeters of Raleigh. He also attended Captain Partridge's Military School at Middletown, Conn. After spending two years at The University of North Carolina, where he was noted for his pugnacious disposition and for his fiery red hair, which caused him to be given the nickname "Redbird," he transferred to Washington (now Trinity) College at Hartford, Conn., where he was a charter student. He was an excellent scholar; at the commencement exercises in August 1829 he received his degree and read a paper entitled "English Travellers in America," preserved in the Cameron Papers at The University of North Carolina.

For some time afterward, Cameron read law in his father's office in Raleigh, but he never practiced law or desired to be engaged in politics. Instead, he found his time occupied in managing the lands and business enterprises for which he became responsible. Agriculture was his chief interest and was the basis of his Jeffersonian philosophy. Samuel Ashe wrote of him: "He saw in agriculture the great mainspring of commerce, of prosperity and of social happiness, and the foundation upon which was laid the great superstructure of human advancement and enlightenment. . . . " It is not an overstatement to say that under him the plantation system in the southern United States achieved its highest point; the great estate that his grandfather, Richard Bennehan, his uncle, Thomas Dudley Bennehan, and his father, Duncan Cameron, had done much to bring into being came into full flower. By the time of the outbreak of the Civil War, Cameron, unquestionably the richest man in the state, had at least thirty thousand acres in not just one but a composite of large plantations—Snow Hill, Brick House, Stagville, and Fairntosh—with many adjoining small plantations and farms. His lands were spread over what are now three counties, Durham, Granville, and Wake, up and down the Neuse River and its headwaters, the Eno, Little, and Flat rivers, from Orange Factory and Lake Michie today in the northwest to Tilt Rock on the Neuse River below Fishdam Ford and the lower part of Oak Grove Township in Wake County in the southeast. The land had a great variety of soils, so that many kinds of crops could be profitably grown. There were not only central residences, with their auxiliary small houses and barns, for the four main plantations, but also many outlying groups of living quarters and utility houses for overseers and slaves.

Cameron's treatment of his slaves was firm but benign. "I had nineteen hundred of them once," he is quoted as saying many years after the Emancipation, "and I never was ashamed to look one of them in the face after they were freed." John H. Wheeler says that Cameron would tell with some zest how he had been prevailed upon by a friend to free a family of slaves and to settle them in Liberia under the care of the American Colonization Society, with a gift of a thousand dollars and house and food for twelve months provided, and how at the end of the year they appeared at the door of his mansion and begged him to take them back. Years after the war, many of his former slaves would greet him with respect and affection, and many of them attended his funeral in 1891, at which eight of his old black servants, some of whom had been slaves, bore his coffin to the hearse.

The wealthiest man in the state at the beginning of the war, he was still the wealthiest, despite the loss of his slaves, at the end of it. By enterprise and sagacity he was soon able to reestablish the economy of his plantations and to extend and diversify his business activities on a secure and stable basis. Like his father and grandfather before him, he also continued to maintain a constant, lively, and helpful interest in education in the state. He took a particular interest in St. Mary's School in Raleigh, and through gifts of money and other practical assistance, such as repairs to buildings, he did much to enable The University of North Carolina to reopen its doors after the war. Of his relation to the university, it has been said, he was "a friend and counsellor under Swain and a father and guide under Battle." There was no activity he undertook with more zeal than that of strengthening and developing this institution. In gratitude for his interest and support, the university established ten Cameron scholarships, which his heirs still control.

Although Cameron seldom ran for office, he was very much interested in politics. In the days of Henry Clay he was a Whig, but as sectional strife became intensified and the Civil War approached he became a Democrat and remained one the rest of his life. In 1856 he was state senator from Orange County. He was chairman of the North Carolina delegation to the 1876 St. Louis Democratic convention that nominated Tilden for the presidency. He was conservative in his attitude toward social change but progressive in whatever had to do with improving the material accommodations of life—land, livestock, rivers, canals, railroads, forests, buildings, and industrial processes.

Cameron did much to give North Carolina an adequate railway system. He helped to promote the building of the North Carolina Railroad and was a director of the Raleigh and Gaston Railroad and Augusta Air Line in the days before these lines became parts of larger systems. He was also a banker and industrialist, owning considerable stock in two banks in Raleigh, the Citizens' and the Raleigh National, and in textile mills in Rockingham, Rocky Mount, and Augusta, Ga. At the time of his death his wealth was tremendous, and his holdings were extended in many directions throughout the state and elsewhere.

Cameron's wealth was large enough to be divided in very substantial shares among the members of his large family. In December 1832 he had married Anne Ruffin, daughter of Thomas Ruffin, chief justice of the state supreme court. She had borne him ten children, three of whom, Jean, Mary Amis, and Duncan, died in childhood. All seven of the other children, Rebecca, Anne Ruffin, Margaret, a second Duncan, Pauline Carrington, Bennehan, and Mildred Coles, married, and most had descendants. Rebecca married twice, first Walker Anderson and second Major John Washington Graham. Anne Ruffin married Major George Pumpelly Collins. Margaret was married to Judge Robert B. Peebles and Duncan to Mary Bagly Short. Pauline Carrington married William Blount Shepard; after her death, Mildred Coles became his second wife. Duncan died before his father's death in 1891, and hence Bennehan was the only surviving son. By the terms of the will he received Stagville, Fairntosh, the Duncan Cameron home in Raleigh, and much other property. Cameron's widow and three daughters were also provided for in the will; so were some friends, housemaids, and "Virgil, the carriage driver."

Samuel A. Ashe, ed., Biographical History of North Carolina, vol. 3 (1905 [portrait]), and Cyclopedia of Eminent and Representative Men of the Carolinas of the Nineteenth Century, vol. 2 (1892 [portrait]).

This take on Paul Cameron is

This take on Paul Cameron is ridiculous. He enslaved other human beings. He’s not an okay guy. It’s preposterous to insinuate that those he enslaved would have any good feelings about this man. A quick search from other publications, including the site run at Stagville, mentions all of the ways he hindered and thwarted the release of slaves after the Emancipation. And his life long ties to white supremacy. So just stop it with the benevolent owner bs.

I just learned today that

I just learned today that this man was the owner of my 6th great grandfather Martin Cameron and his son Martin Cameron II. Seeing this picture sends chills through me. Bittersweet. I’m glad to have traced back so far but also the road ends here as the records stop. My family has a rich history and countless stories of trial and triumph.

I am the great grandson of

I am the great grandson of John W. Graham mentioned above and have read with pleasure both books, Piedmont Plantation and A Mind to Stay. I have met Jean Anderson who lived in Durham, a wonderful and impressive lady. Both books give a richness of detail to the life of Mr. Cameron and his family. Despite his prodigious wealth, all was not happy in childhood or adulthood. I have donated many items from Fairntosh (now Treyburn) to the Southern Historical Collection at UNC, but still retain a number of original items. One is the 1885 acknowledgement of the 10 scholarships given in his honor by his daughter, Ann Rebecca Cameron Graham, 1st wife of JWG. This lady was my paternal grandfather's half sister, and the family name still graces a number of streets and buildings locally.

Hello there,
I'm an amateur student of NC history and have frequently used this excellent website as a reference. I'm wondering what your policy is on updating and editing certain biographies, such as this one on Paul Cameron. Much has been written about him since this short biography. For instance, Jean Anderson's Piedmont Plantation, and Sydney Nathans' A Mind to Stay.
Best regards,
Bill Phillips, Durham, NC

Thank you for your email about our entry on Paul Cameron, and for your kind words about NCpedia. The entry in question comes (via permission from UNC Press) directly from William S. Powell’s Dictionary of North Carolina Biography. Since this is previously published item, we are not able to make changes to it. We occasionally receive requests from readers to modify incorrect information. In those cases, we add a note below the entry. We are also open to expanding our Additional Resources section. One of the authors you mention, Jean Bradley Anderson, is cited there, but we can her Piedmont Plantation to this list. We can also add Nathans’ book.

Thank you for these valuable recommendations.