John Hawks, architect, contractor and accountant, and the supervising architect (1767–70) of Tryon Palace at New Bern, was born in Lincolnshire, England. Trained under Stiff Leadbeater of Eton, who designed the Harcourt Mansion, Nuneham Courtenay, in Oxfordshire, he became surveyor of St. Paul's Cathedral, London, in 1756. Evidently he had other experience before being selected as "a very able worthy . . . master builder" to accompany Lieutenant Governor William Tryon to North Carolina for the purpose of planning a government house for the colony. Not long after his arrival at Brunswick on 10 Oct. 1764, Hawks moved to New Bern where he was a prominent citizen for the remainder of his life. 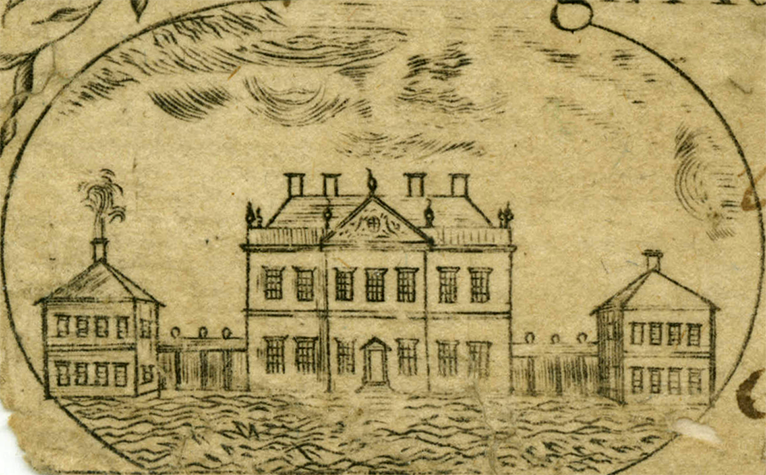 His first drawings for the government house and governor's residence were dated 29 Dec. 1766. A contract was signed on 9 Jan. 1767 by "His Excellency, William Tryon, Esquire, Captain General Governor and Commander-in-Chief in and over the province of North Carolina, of the one part, and John Hawks, of Newbern, architect, of the other part." It provided that Hawks would design and superintend the construction, under the supervision of Tryon, to whom the Assembly—with an initial appropriation of £5,000, later increased to £15,000—had entrusted "sole Direction and Management." The agreement stipulated the payment of an annual salary of £300 proclamation money to Hawks as "a person acquainted with the value of the work, qualified to adapt the proportions, experienced to direct the quality and choice of materials, and of ability to judge the performance of the several craftsmen and tradesmen."

Under modified specifications approved by the Crown, the edifice was designed like a London vicinity house "in the pure English taste," with which Hawks was most familiar. The first bricks were laid on 26 Aug. 1767. With a letter of introduction from Tryon, Hawks went to Philadelphia to secure the services of expert artisans. Although not finished, the "palace" was ready for Tryon, his wife, and young daughter to move in by early June 1770. A gala celebration was held there on 5 December while the Assembly was in session. In his official address to the assemblymen, Tryon commended "the ability of the architect" and praised the structure as a "public ornament." Replying to his message, both houses of the Assembly thanked the governor and complimented the "elegant and noble" building.

Tryon wrote: "Several persons who have passed through here from the other colonies esteem this house the finest capitol building on the continent of North America." The handsome Georgian brick main building was destroyed by fire on the night of 27 Feb. 1798, after the state's capital had been moved to Raleigh. A complete and authentic reconstruction of it and two large brick wings was accomplished between 1952 and 1959 by the Tryon Palace Commission, a state agency, with funds provided by the late Mrs. James Edwin Latham, of Greensboro, a native New Bernian.

To protect New Bern against threats from Regulators, Tryon appointed Hawks and Claude Joseph Sauthier to erect extensive fortifications. Hawks was in charge of making gun carriages. For this and other assignments, he acted as a paymaster and commissioner of finance, disbursing and reporting public funds authorized in March and April 1771 by Tryon.

The first professional architect to remain in America, Hawks did much other architectural and construction work. Tryon's successor, Governor Josiah Martin, referring to Hawks as "a man of unexceptionable character, of known sufficient Qualifications," contracted with him to build a fence around the Palace Square and a smokehouse, pigeon house, and poultry house on the palace grounds. Additions for the Craven County courthouse were also designed and supervised by Hawks. He was commissioned to erect for the district and town of New Bern a jail and a jailer's house, of which he was a trustee, and twice received commissions to superintend jail repairs. He was probably the architect hired to complete the John Wright Stanly house in New Bern and the brick plantation home, Bellair, several miles from the city.

Besides undertaking tasks for Samuel Johnston of Edenton, Hawks drafted plans and dimensions for a "Cupola for Edenton Church Novr. 22nd 1769." Although this cupola is reported not to have been put on the church, it appears similar to the one on the Chowan County courthouse. An oversized "Plan and Elevation of a Prison for the District of Edenton June 1st 1773," with measurements for each portion, is not signed but authorities claim it to be "clearly by the same person who did the drawing of the cupola in 1769."

At the Metropolitan Museum of Art in New York is displayed a hand-carved doorway attributed to Hawks. The Southern Historical Collection at The University of North Carolina, Chapel Hill, contains a drawing of "Hillsborough" church, with another sheet of dimensions and specifications in John Hawks's handwriting. Drawings for a church in Granville County, dated 1771, are among the Hawks papers collected by his grandson, the Reverend Francis Lister Hawks, and deposited in the New-York Historical Society Library.

The architect's activities were not confined to his profession. A member of Christ Episcopal Church, he witnessed Tryon's signature and seal on a 1765 commission to "empower Thomas Clifford Howe . . . to induct the Reverend James Reed, Clerk, A.B., into the Rectory" of that church, of which Reed had already been rector for almost twelve years.

Hawks held numerous political offices beginning on 30 Oct. 1766, when he acted as mace bearer for the upper house of the Assembly. The next year he was nominated by Tryon to be "Collector of his Majesty's Customs for the port of Beaufort," the governor expressing confidence that he would serve "with ability, diligence and integrity." From 1770 to 1772 he was clerk of the pleas. "Particularly recommended to my patronage by my friend, Governor Tryon," Governor Martin had Hawks appointed clerk of the Council or upper house, a post he held in 1773 and 1774. Martin referred to him as "a very ingenious and worthy man."

After the American Revolution, Hawks continued to hold public office in North Carolina. He was a justice of the peace, for three years he was on New Bern's board of tax assessors, and for some time from 1781 he was a district auditor. In 1782, he was serving on a commission to handle claims of officers and soldiers of the North Carolina Continental Line; but, because Halifax was considered a more convenient location than New Bern, the three New Bern members were replaced the following year by three residents of Halifax. From 1784 to 1786 the assemblies elected Hawks to the Council of State, of which he was president in 1785. He was long the state's first auditor; his last payment for auditing was recorded in November 1789.

In 1785 he was appointed a trustee for the proposed Dobbs Academy at Kinston. Two years later he was one of the five managers named by the legislature to conduct a lottery to raise money for a Craven County home. During December 1788 he was made judge of the court mercantile and maritime for the New Bern district; however, on 4 Jan. 1789 he submitted his resignation to Governor Samuel Johnston, explaining that he did not feel qualified.

For the last five years or more of his life, Hawks suffered from gout. He died in New Bern. The inventory of his estate was filed 10 Mar. 1791 by his son, Francis, at the Craven County courthouse. He was also survived by another son, Samuel.

In 1768 Hawks married Sarah Rice, the daughter of John Rice, secretary of the Crown, and the grand-daughter of Nathaniel Rice, who as Council president served as acting governor from 15 Apr. to 27 Oct. 1734, when royal Governor Gabriel Johnston arrived, and again, after Johnston's death, from 17 July 1752 until his own death on 29 Jan. 1753.

Francis and his first wife, Julia, were the parents of five sons and five daughters. It is said that he "tuned up" the boys every Monday morning with a whipping. If one of them demurred and pleaded innocence, he would say, "Oh, you will deserve it anyway before the week is half gone." That this chastisement was effective is suggested by the fact that all the sons became successful in their respective pursuits. John Stephens Hawks (21 Mar. 1796–16 Oct. 1865) was a lawyer. The epitaph on his tombstone in St. Peter's Churchyard, Washington, N.C., reads: "An Honest Man." Samuel Cicero Hawks (1 Mar. 1807–16 Feb. 1843) was a businessman and educator. He died at Flushing, N.Y., but was buried in Cedar Grove Cemetery, New Bern; the gravestone inscription reads in part: "The Triumph of a Brother's Love to a Brother's Memory."

The other three sons were Episcopal clergymen. The Reverend Francis Lister Hawks (19 June 1798–27 Sept. 1866) and the Right Reverend Cicero Stephen Hawks (26 May 1811–19 Apr. 1868) are the subjects of sketches in this volume. The Reverend William Nassau Hawks (b. 4 Mar. 1809), was successively rector of St. Peter's Church, Washington, N.C.; teacher at the Moses Griffin School, New Bern, one of the first free trade schools for poor girls; rector of Christ Church, New Bern (1847–53); and rector at Columbus, Ga., where he died.