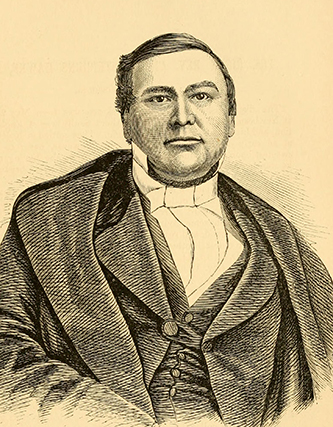 Cicero Stephens Hawks, Episcopal bishop, was the youngest son of Francis and Julia Airay Stephens Hawks of New Bern and a grandson of John Hawks and Sarah Rice. The uncle for whom he was named, Marcus Cicero Stephens, also of New Bern, was a banker and Episcopal vestryman. Educated in his hometown by the Reverend Thomas P. Irving, Episcopal priest and schoolteacher, young Hawks also was an amateur actor in some of the "theatrical exercises" directed by Irving. In 1830 he was graduated with an A.B. degree from The University of North Carolina and began to study law in New York City. He was almost ready for admission to the bar when he decided to enter the ministry and was tutored by his brother, the Reverend Francis Lister Hawks. In 1836 he was ordained to the priesthood.

His first parish was at Saugerties, N. Y. In February 1837 he became the first rector of Trinity Church, Buffalo, N. Y., and in October 1843 he accepted a call to Christ Church, St. Louis, Mo. The next year, on 20 October, during a General Convention at Christ Church, Philadelphia, he was consecrated as the first Episcopal bishop of the new Diocese of Missouri.

As a pioneering missionary on the western frontier, Hawks labored tirelessly through a wide area, traveling by horseback, wagon, stagecoach, and steamboat. For ten years he was also rector of the St. Louis church until the diocese was able to assume his support. When that city was scourged by an epidemic of Asiatic cholera in 1849, he remained heroically at his post, ministering to the sick and burying the dead.

Throughout the twenty-five years of his bishopric, Hawks traversed the entire state, conducting services, organizing parishes, and winning friends for himself and his church by his attractive personality, eloquent sermons, and dedicated devotion to his calling. Even during the Civil War he continued his arduous journeys, carrying consolation to grieving homes and trying to bind up the wounds of civil strife. "I hope all my flock go to church now," he wrote, in his earnest efforts to "harmonize all elements in the church."

Having taken the earlier oath of loyalty to the Union, Hawks advised other clergymen to decide according to their own consciences whether or not to take the postwar "Ironclad Oath," though he deplored some of its features. In those stormy times his health began to fail. Weak from his labors, he held an Easter Sunday service in 1868 at St. Louis with the assistance of a visiting minister. A week later he died, and was buried in Bellefontaine Cemetery, St. Louis.

Edwards, Richard, and Merna Hopewell. "The Right Reverend Cicero Stephens Hawks, D.D., Bishop of Missouri."  Edwards's great West and her commercial metropolis: embracing a general view of the West and a complete history of St. Louis, from the landing of Ligueste, in 1764, to the present time; with portraits and biographies of some of the old settlers, and many of the most prominent business men. St. Louis: Published at the office of "Edwards's monthly". 1860. 545. https://archive.org/stream/edwardssgreatwes01edwa#page/544/mode/2up (accessed April 11, 2014).

Roberts, engraver, and Brown, photographer. "The Right Reverend Cicero Stephens Hawks, D.D., Bishop of Missouri."  Edwards's great West and her commercial metropolis: embracing a general view of the West and a complete history of St. Louis, from the landing of Ligueste, in 1764, to the present time; with portraits and biographies of some of the old settlers, and many of the most prominent business men. St. Louis: Published at the office of "Edwards's monthly". 1860. 545. https://archive.org/stream/edwardssgreatwes01edwa#page/544/mode/2up (accessed April 11, 2014).