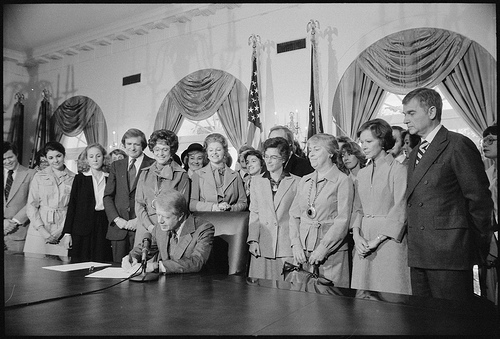 Part 8: Activism and the Expansion of Women's Opportunities and Public Influence

World War II marked another milestone, as North Carolina women were encouraged to work in factories, munitions plants, and the military to help the war effort. In 1940 one out of every four women in the state worked outside the home. Women kept agricultural production moving, participated in bond drives, conserved food, organized scrap metal drives, joined the Red Cross and the USO, and opened their homes to soldiers' wives who came to the state to visit their husbands. More than 7,000 North Carolina women joined one of the military services.

The war ended with men returning to their former jobs and women being urged to return to their homes. In North Carolina, which historically had a large workforce of women, nearly two-thirds stayed at work. Black women still found work mostly in domestic service, but their experiences during the war later encouraged black women and black men as well to challenge segregation in the state. After the 1954 U.S. Supreme Court decision in Brown v. Board of Education, black women in Greensboro organized interracial meetings at churches and the YWCA to discuss integration. When the Greensboro sit-ins occurred in 1960, women joined the movement, although activists such as Ella Baker decried the limited leadership roles allowed black women.

North Carolina women gained visibility in the twentieth century as artists, writers, and musicians. Etta Baker, for example, was nationally recognized for her blues guitar music, and Shirley Caesar enjoyed an illustrious career as one of America's premier gospel singers. Visual artists Clare Leighton, Angelica Reckendorf, and Susan Moore were key members of the influential artistic community centerd at Black Mountain College in the mid-twentieth century. Betty Adcock, Lee Smith, Doris Betts, Wilma Dykeman, Elizabeth Spencer, Kathryn Byer, and Maya Angelou are among many women writers in the state who have helped create a distinctive southern literature respected and enjoyed by readers around the world.

The feminist movement of the 1960s and 1970s challenged and transformed many assumptions about women's roles in the home and workplace. Full equality with men remained elusive, however, in job opportunities, education, and politics. Governor Terry Sanford appointed the Governor's Commission on the Status of Women in 1963, with Duke University professor Anne Firor Scott as chair, to study and report on North Carolina women. The commission clearly delineated that the number of working women had increased by 80 percent between 1940 and 1960, with most women in low-paying jobs without benefits. The report urged pay equity for women and improved child-care options. In 1973, when women activists lobbied the state legislature to ratify the Equal Rights Amendment (ERA), they assumed women suffering from job discrimination, lower wages, fewer health benefits, and limited access to quality day care would support its passage. Instead, many women, as well as men, fearing what they saw as a threat to the South's traditional family values, regarded the ERA as a feminist attack rather than a women's issue and successfully lobbied against it. The legislature voted the amendment down three times, the last time in 1982.

In the late twentieth century, women assumed greater leadership roles in the state legislature, although men continued to hold most of the important legislative posts or appointments on boards and commissions. Women have served as chairs of the Senate Appropriations Committee, as House and Senate minority leaders, and as Speaker pro tempore of the House. Beverly Perdue, a state senator from Craven County, became North Carolina's first female lieutenant governor in 2000 and won reelection in 2004. Nonetheless, in 2004 women made up only 20.6 percent of the state legislature, although they constituted the majority of the state's population.

In 1992 Eva Clayton became the first woman and, along with Mel Watt, the first African American since Reconstruction to be elected to the U.S. Congress from North Carolina. In 2005 Elaine Marshall started her third term as secretary of state in North Carolina, and Cherie Berry began her second term as head of the Department of Labor. Women headed five of the state's major governmental departments as well. More women found advancement in the field of law. In 2002, 57 percent of the entering class at UNC-Chapel Hill's School of Law was female. Only one female justice sat on the North Carolina Supreme Court in 2005, but 7 out of 15 justices on the state's Court of Appeals were women.