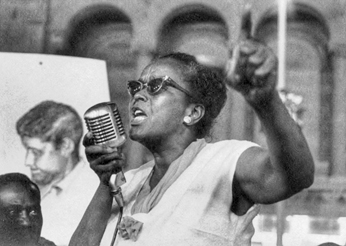 Ella Baker was born on December 13, 1903 in Norfolk , Va. When Ella was eight years old her family moved to Littleton, North Carolina. In 1918, Ella Baker entered Shaw University, a Baptist boarding school and college in Raleigh, North Carolina. Currently, Shaw is strictly a university; however, it was once a high school as well. Ella attended both the high school and college and graduated from Shaw University in 1927. Upon graduating from Shaw, Ella Baker moved to New York City to find employment and to get away from the harsh Jim Crow laws of the South. In 1936, Ms. Baker began working as a consumer education teacher for the Works Progress Administration (WPA), providing instruction on how to purchase goods and supplies. In 1938, Ella Baker began working for the national office of the National Association for the Advancement of Colored People (NAACP), the oldest civil rights organization in the country. She started as a field secretary and was assigned the task of investigating the lynching of blacks in the South. In 1942, Ella Baker became a director of branches for the NAACP. As the director, she was responsible for helping local chapters across the country with managing their activities, raising funds and recruiting members.

In 1957, Ella Baker moved to Atlanta to set up the office of the Southern Christian Leadership Conference (SCLC) and to organize the voter registration program. She was eventually named acting director of the SCLC and served in that capacity for many years. On February 1, 1960, four college students from North Carolina A & T University in Greensboro sat down at a Woolworth’s counter and refused to leave until they received the same service as the white customers. This protest ignited the “Sit-in Movement” and soon students across the South began staging their own sit-ins to protest segregation and discrimination. Ella Baker was impressed with their efforts and decided to bring these student leaders together. On April 1960, Ella Baker returned to her alma mater Shaw University to speak at the Southwide Youth Leadership Conference on Nonviolent Resistance to Segregation. From this conference, the Student Nonviolent Coordinating Committee (SNCC) was formed as a separate organization designed to help the students galvanize and coordinate their sit-ins and other activities. In 1960, Ella Baker resigned from the SCLC in order to devote her time to SNCC where she served as an advisor for many years.

Although the Civil Rights Act was enacted in July 1964, many African Americans were still fighting for their right to vote. Ella Baker, along with other leaders, formed the Mississippi Freedom Democratic Party (MFDP) in April of 1964, to assist with voter registration in the state. This became the 3rd civil rights group in which Ella Baker had a role in organizing. Ella Baker was a dedicated and respected leader in the fight for civil rights until her death on December 13th, 1986 in New York City.