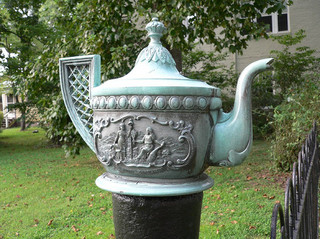 Part 3: Women in the Revolutionary Era and Early Statehood

During the American Revolution, North Carolina women experienced the disruptions of war while assessing their roles in the new republic. Patriot women supported economic boycotts of English goods, made bandages, nursed the wounded, made and wore homespun, faced personal danger, and maintained farm operations in a time of inflation and shortages. Loyalist women often faced the scorn of their Patriot neighbors; some, like Scottish-born Flora MacDonald, were forced from their homes. New Bern women solved commodity shortages by sharing the single remaining needle in town and pinning their dresses with thorns. Fifty-one women in Edenton signed a petition in support of the political "resolves" of 1774 and asserted it was their duty to do so. The "Edenton Tea Party" indicated that astute urban women understood politics and considered their support of the new republic as an important responsibility.

Improved educational opportunities represented one of the major advancements for women in the new state of North Carolina, although most politicians generally avoided educational reform in the early 1800s. Wealthy planters who educated their daughters hired tutors or sent their daughters to schools outside the state. As private academies developed in the state, more daughters of the elite attended these institutions for instruction in math, history, reading, literature, and the ornamental arts, as well as in the "female attributes" of piety and modesty. About 300 female academies opened their doors in the state between 1820 and 1860. Salem Academy opened to non-Moravians in 1804; Quakers started the New Garden Boarding School (later Guilford College) in 1837; Methodists chartered the Greensboro Female College in 1838; and Episcopalians established Saint Mary's School in 1842. These and other denominational and family-run schools varied in quality, but they generally improved educational opportunities for girls in the state.

Church denominations sent missionaries to Native American communities in North Carolina to teach Christianity and train Indian children in what were deemed proper gender roles. They were instructed in English instead of their native languages, although some tribes escaped the influence of missionaries and retained their native customs.

The children of free blacks in the state, both male and female, had access to some education. Many became apprentices, while others worked for their parents. The 1850 census listed 42 percent of free blacks as being literate, many having been taught by Quakers, Presbyterians, or Methodists. Free black parents, in turn, taught their children to read and write.

In 1839 North Carolina established a public school system for white boys and girls. By 1853 there were 40,000 students enrolled in public schools. Many families questioned the need to educate farm girls, however, and fewer yeoman girls than boys attended public schools.