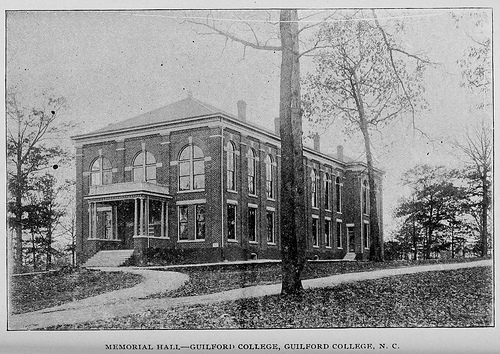 Guilford College, affiliated with the Society of Friends (Quakers), is the third-oldest coeducational institution in the nation. Located in Greensboro, the school was opened in 1837 by the Quakers as the New Garden Boarding School. Its main building, Founders Hall, was a two-story brick structure that stood in the middle of a vast hardwood forest. Situated in the midst of the state's Quaker population, the school was a station on the Underground Railroad as well as a center of resistance to Confederate conscription during the Civil War. During Reconstruction, the school reorganized with assistance from the Society of Friends and was renamed Guilford College. Degrees were first conferred in 1889 under a charter issued in 1887. The preparatory department was dropped in 1924, and in 1929 the courses were organized into a "core curriculum."

Although Guilford College has changed over the years, it retains its commitment to basic Quaker principles, including pacifism. It is the only Quaker college in the South. The college in the early 2000s had an enrollment of about 1,200 students, offering 40 academic majors and 5 cooperative preprofessional programs. Guilford College maintains a close relationship with the North Carolina Yearly Meeting of the Society of Friends (the statewide organization), but ownership and ultimate responsibility is held by a self-perpetuating, 36-member board of trustees. Two-thirds of the board members must be recognized as Quakers by the Yearly Meeting based on the recommendations of local monthly meetings.

I was a student of dr.

I was a student of dr. Stoesen and wish to contact him by e-mail. Can someone assist me ?

Thank you for visiting NCpedia.  I am going to connect you with reference services at the NC Government & Heritage Library. A librarian will contact you shortly to help with suggestions for locating Dr. Stoesen.