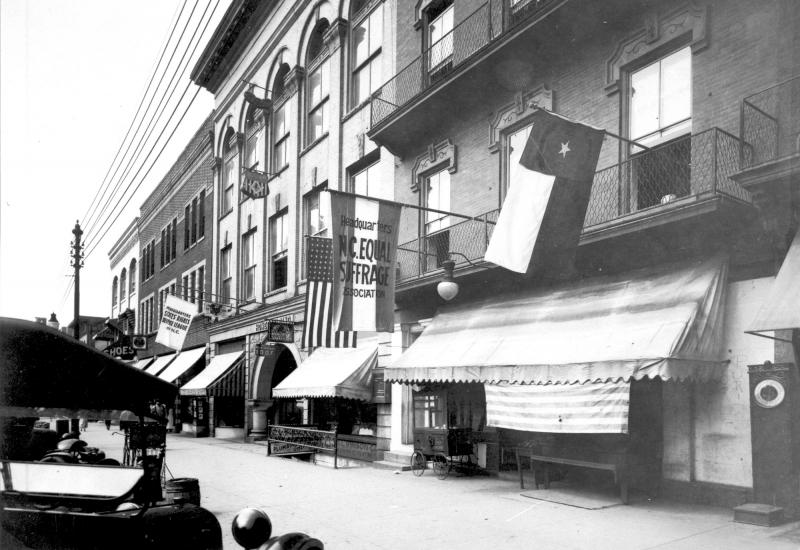 North Carolina Equal Suffrage Association was formed in 1894 in Asheville but had little activity until November 1913, when it met in Charlotte and elected Barbara Henderson of Chapel Hill as president. Membership extended only to white men and women. On 1 Dec. 1913 the North Carolina organization was formally recognized by and became affiliated with the National American Woman Suffrage Association. Within a year, statewide membership had reached 210, and by the end of 1917 the association boasted 1,000 members. Its early efforts were devoted to promoting suffrage at the grassroots level, while members worked to present a nonmilitant organization that offered no threat to the stability of either home or society.

After years of controversy, the Nineteenth Amendment passed the U.S. Congress in 1919. By March 1920, 35 of the 36 states needed for ratification had approved it. North Carolina suffragists hoped that their state would cast the deciding vote but were bitterly disappointed when state senator Lindsay Warren of Beaufort County managed to have the issue tabled until the following year. When Tennessee voted for ratification in 1920, the suffrage amendment became federal law without North Carolina's vote. Eventually many former suffragettes joined the newly formed League of Women Voters. The North Carolina General Assembly finally ratified the Nineteenth Amendment in 1971.