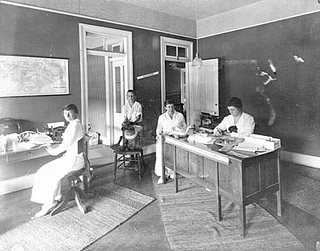 From Virginia Dare's birth on Roanoke Island in 1587 to Elizabeth Dole's election as a U.S. senator in 2002, many North Carolina women have been leaders or participants in important historical events and trends. Countless others-of all races-have lived, worked, and shaped their homes and communities in relative obscurity. Written histories of North Carolina have often focused on topics relating to the work and accomplishments of men, and even in the early 2000s North Carolina women remained marginalized in many ways. Large numbers worked in low-skill jobs in a time of increasing demand for a technologically advanced workforce. Equity of pay for women and men remained an issue. The number of female-headed households continued to increase, while many of the women heading households had low-paying jobs and children to support. At the same time, North Carolina women of ability and energy, regardless of race or class, have enhanced women's opportunities in politics, the arts, and the professions.

I believe Terrell Crow is my

I believe Terrell Crow is my cousin who I lost contact with many years ago.

Could you pass my email address on to her and ask her to contact me?

I am John Larry Armistead, son of John Percy and Wynelle Alexander Armistead.

Thank you so much