By Elizabeth A. Fenn, Peter H. Wood, Harry L. Watson, Thomas H. Clayton, Sydney Nathans, Thomas C. Parramore, and Jean B. Anderson; Maps by Mark Anderson Moore. Edited by Joe A. Mobley. From The Way We Lived in North Carolina, 2003. Published by the North Carolina Office of Research and History in association with the University of North Carolina Press. Republished in NCpedia by permission. Revised December 2022 from Digital Heritage Library. 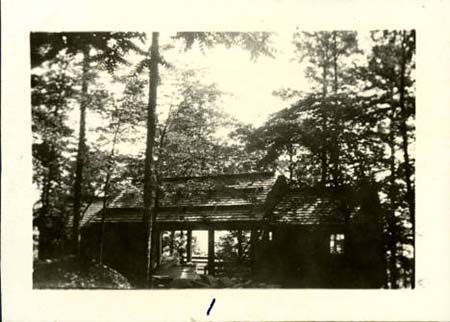 Two of the most important New Deal relief programs were the Civilian Conservation Corps (CCC) and the Works Progress Administration (WPA). By late 1935 there were more than three score CCC camps in North Carolina. They provided work, wages, and board for thousands of young men engaged in flood-control and reforestation projects, road building, and the like. Reforestation of what had been worn-out cotton and tobacco land near Raleigh revived a large area that was subsequently included within Umstead State Park. CCC workers built a migratory bird refuge at Swan Quarter, complete with ponds, seawalls, fire towers, and truck and foot trails. Other workers quartered in the western mountains supplied labor used in completing Mount Mitchell State Park, on the highest peak east of the Mississippi. Others worked on portions of the Blue Ridge Parkway and the Great Smoky Mountains National Park.

Although the CCC's main work was reforestation, soil conservation, and flood control, its tasks expanded to include disaster relief and the construction of facilities in state and national parks. North Carolina's legacy from the CCC's many camps may be seen in such structures as the stone lodge in Morrow Mountains State Park, in Stanly County; the heartpine buildings used as campsites at Singletary Lake, in Bladen County; the migratory bird refuge at Swan Quarter, in Hyde County; and the stone bridges and walls along the 469 miles of the Blue Ridge Parkway.

The WPA, broader in scope and enrollment, found work for the unemployed on roads, bridges, buildings, airports, and other construction projects. But programs were also provided by the WPA for unemployed artists, writers, scholars, musicians, and actors. One group was paid to locate and record the personal narratives of formerly enslaved people, another to compile a state guidebook, still others to undertake historical research. By the time it was phased out in 1943, the WPA had spent $172,000 on projects employing some 225,000 Tar Heels.

WWII: Boost to Industry and Growth of Military Bases in North Carolina

The United States' support of its allies and eventual entry into World War II in 1941 increased production and further boosted North Carolina and the nation out of the depression. Activity at the state's many U.S. military bases significantly aided recovery. Fort Bragg (originally established as Camp Bragg in Cumberland County during World War I) swelled to tremendous size, housing over 100,000 soldiers. Seymour Johnson Air Force Base in Wayne County was established in 1941 as an Army Air Force technical training school. The federal government constructed Camp Lejeune in Onslow County in 1942 as a base for the Second Marine Division and a place to train troops in amphibious assault. Other smaller military facilities appeared throughout the state. The shipbuilding industry employed many North Carolinians to meet the demand for war vessels. Shipyards in Wilmington, as well as in New Bern and Elizabeth City, built submarine chasers, minesweepers, and cargo and troop ships. Federal contracts brought over $10 billion to North Carolina as its citizens labored to provide textiles, lumber, ammunition, metals, and food for the war effort. 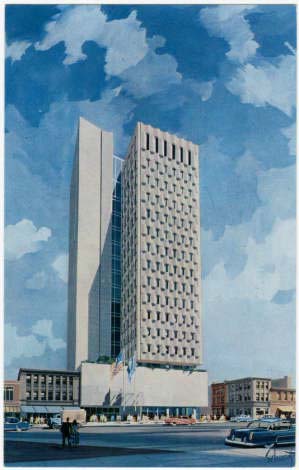 A key factor in the post-depression business surge in North Carolina was the role of large urban banks. The outstanding example for many years was First Union National Bank in Charlotte. Founded in 1908, First Union made a number of important mergers in the 1950s and 1960s, notably with Cameron-Brown of Raleigh, a bond and mortgage company. First Union was the state's third largest bank in 1966, with 140 offices in 67 North Carolina communities and Nassau in the Bahamas.

Still more important to North Carolina's business was Wachovia Bank and Trust Company of Winston-Salem. Both founder-president Francis H. Fries and, following his death in 1931, his successor, Robert M. Hanes, were scions of great textile families. By an ambitious series of mergers, including that with black-owned-and-operated Forsyth Saving and Trust Company in 1930, Wachovia developed into the largest bank between Washington, D.C., and Atlanta. Its $1.5 billion dollars in resources ranked it in 1969 as one of the major banking firms in the nation. Recently, Wachovia and First Union Bank combined to form an even larger financial institution. North Carolina National Bank (NCNB), third largest in the region from the day it was chartered, was formed in 1960 by the merger of large banks in Charlotte and Greensboro in a calculated challenge to Wachovia's southeastern leadership. NCNB subsequently became NationsBank, which in 1998 merged with Bank of America.

Deliberate attempts to attract tourists were infrequent before the late 1940s, by which time paved roads and hotels were fairly common. A commemoration of the three hundred and fiftieth anniversary of the birth of Virginia Dare, first English child born in America, at the site of her birth on Roanoke Island, in Dare County, was a prewar event that presaged the future drawing power of North Carolina for visitors from other sections of the country. The 1937 event featured an outdoor drama written by Pulitzer Prize-winner Paul Green of Chapel Hill entitled The Lost Colony.

The success of The Lost Colony inspired similar historical dramas in later years. The most popular of these included Kermit Hunter's two mountain epics, Unto These Hills, which opened in 1949 at Cherokee, and Horn in the West, begun two years later at Boone.

The rebuilding of Tryon Palace at New Bern in the 1950s was a milestone in the growth of interest in historic restoration and preservation that also aided tourism. Local initiative often played the key role in such projects, which restored the eighteenth-century Moravian village of Salem and whole clusters of early buildings at Edenton, Halifax, Murfreesboro, Wilmington, and other towns.

North Carolina becomes a hub for trucking and seagoing ports

By the 1950s a booming North Carolina wholesale and retail trade led the South Atlantic Region. The state had become the hub of the eastern seaboard's trucking industry, with the home offices of more long-time interstate trucking firms than any other state in the union.

In port facilities and seagoing business, North Carolina's ports ranked well behind Savannah and Norfolk but had overtaken the ports of South Carolina in business volume. With the aid of the State Ports Authority, established in 1945, Wilmington's maritime business rose steadily. By 1968 it was handling the cargoes of more than 500 ships, 23,000 trucks, and 8,000 railroad cars per year. Morehead City, with its shallower harbor, handled less than half of Wilmington's commerce but hoped for greater progress following completion in 1968 of a bulk facility with a half-mile-long conveyor belt and 600,000 square feet of warehouse space.