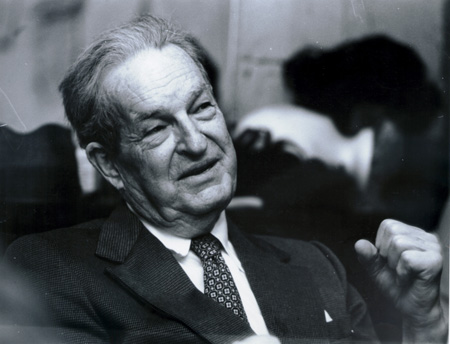 Paul Eliot Green, dramatist, author, and teacher, was born in Harnett County, the son of William Archibald and Betty Lorine Byrd Green. He grew up on his father's farm engaging in the labors and pleasures of rural life. For a time he played professional baseball for a team in Lillington and was widely acclaimed as a pitcher because he was ambidextrous. Music also was an important part of his life. His mother bought an organ and taught her children to play. Green taught himself to play the violin and later composed music for his plays. After graduation from nearby Buies Creek Academy in 1914, he worked to earn money for college and entered The University of North Carolina in 1916. As a freshman he wrote poems that were published in The Carolina Magazine, and he was the author of the play produced by the seniors at commencement.

In April 1917, before finishing his first year at the university, Green enlisted in the army for service in World War I. Before leaving for France he published at his own expense a thin volume of poems, Trifles of Thought by P.E.G., because he was not certain that he would return from the war to pursue the literary career of which he dreamed. Young Green rose rapidly through the ranks from private to corporal, sergeant, and sergeant-major with the 105th Engineers, 30th Division; afterwards he was commissioned second lieutenant with the Chief of Engineers in Paris. During a year's service at the front in Belgium and France, he participated in several months of heavy combat in the trenches. This experience had a lasting effect on him, though he was always reluctant to speak about it. He returned to the university in 1919 and was graduated with a major in philosophy in 1921. Green studied under Frederick H. Koch, a newly arrived member of the faculty, who had organized the Carolina Playmakers in 1918. The new professor encouraged Green and others to write "folk plays" based on local subjects and their own experiences. Plays by his students, including many by Paul Green, were produced. One of the students, Elizabeth Lay, daughter of the Reverend George Lay, rector of St. Mary's College in Raleigh, married Green in 1922. After a year of graduate study in philosophy under Professor Horace Williams in Chapel Hill, Green went to Cornell University for further graduate work and in 1923 became an assistant professor of philosophy at The University of North Carolina. He remained in that department until 1939, when he became a professor of dramatic art. In 1944, he resigned to devote full time to writing.

Throughout his twenty-one years as a professor, Green wrote plays as well as short stories, novels, and poetry. Although many were produced by the Carolina Playmakers in Chapel Hill, some were produced in Washington, D.C., New York, and elsewhere. In 1927 he was awarded the Pulitzer Price for In Abraham's Bosom, produced at the Garrick Theater in New York. His other Broadway plays included The House of Connelly, Roll Sweet Chariot, Johnny Johnson, and Native Son. 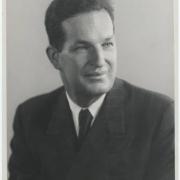 For many years Paul and Elizabeth Green collaborated with others in the production of "The Literary Lantern," a newspaper column of book reviews and book news. Green also was editor of The Reviewer, a literary journal, and contributed to newspapers, particularly the Raleigh News and Observer. Travel for educational purposes occupied some of his time. In the summer of 1926 he was at the MacDowell Colony in New Hampshire, and, while on leave of absence as a Guggenheim Fellow in 1928 and 1929, he studied the theatre in Germany and England. In 1951 he lectured in Japan and elsewhere in the Orient.

After seeing the motion picture, The Birth of a Nation, in 1915, Green anticipated the development of this medium as a true art form. He welcomed the opportunity in 1932 to go to Hollywood, Calif., under contract to Warner Brothers to write scripts for motion pictures. For various lengths of time and for different companies, including Metro-Goldwyn-Mayer, he wrote scripts in Hollywood for films in which George Arliss, Lionel Barrymore, Bette Davis, Clark Gable, Greer Garson, Will Rogers, and others appeared. Although well paid for his work, he was rarely satisfied with the artistic quality of the final product. He often declined to accept particular assignments and finally after 1964 ended the association.

Long interested in a new form of drama, Green was inspired by some plays he saw in Germany. As early as 1928, he wrote Professor Koch of his hope to use the theme of the "Lost Colony" of Roanoke Island in a dramatic production. This was realized in 1937, when The Lost Colony, a "symphonic drama" as he termed it, was produced in an outdoor theatre on Roanoke Island, site of the 1587 colony. Employing spoken word, song, music, dance, pantomime, and light, it was a notable success and except for the years of World War II has been produced by the Roanoke Island Historical Association each summer since. This was merely the first of such works by Green and others; historical dramas, presented at or near the site of the actual events depicted, have appeared all around the United States. Green himself was the author of fifteen plays written to be performed outdoors in North Carolina, Florida, Virginia, Kentucky, Texas, and elsewhere. 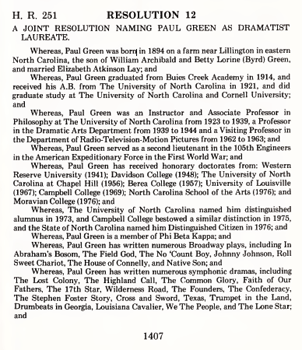 Green's contributions were widely recognized. In addition to the early Pulitzer Prize and the Guggenheim Fellowship, he received the Belasco Little Theatre Tournament trophy in 1925. Other honors included the National Theatre Conference plaque, the American Theater Association citation for distinguished service, the Frank P. Graham Award, the Morrison Award, the North Carolina Award, and the Sir Walter Raleigh cup. In 1979 the General Assembly named him North Carolina's dramatist laureate. He received honorary doctorates from The University of North Carolina, Davidson College, Campbell College, the North Carolina School of the Arts, and four out-of-state colleges and universities.

He was a member of the National Institute of Arts and Letters and of the executive committee of the U.S. National Commission for UNESCO (1950–52). In 1951, he was a delegate to the UNESCO conference in Paris.

From his youth, when he demonstrated sympathy and compassion for the poor, blacks, and others whom he saw around him in his rural community, Paul Green acted and spoke in support of the basic rights of all humanity. A gentle, kindly man, he knew when, where, and how to direct attention to the wrongs he witnessed and to seek redress. Civil rights, poverty, and political oppression were all causes of concern to him, and he lent support to them in person, in print, and financially. He spoke out against and wrote plays dealing with war, lynching, chain gangs, prejudice, and superstition. Even though at times his stand was unpopular in many quarters, his ideals were understood and there was little or no personal criticism of him. It was known that Green was "haunted by the ideal of perfection" and that he believed "in the uniqueness of man as responsible to his neighbor and to God."

Paul and Elizabeth Green were the parents of Paul Eliot, Nancy Byrd, Betsy McAllister, and Janet McNeill. He was buried in the old Chapel Hill Cemetery near the Paul Green Theatre on the university campus.

McGraw-Hill Encyclopedia of World Drama, vol. 2 (1972), for a list of his plays (a copy in the North Carolina Collection, University of North Carolina Library, Chapel Hill, has been updated with typed additions).