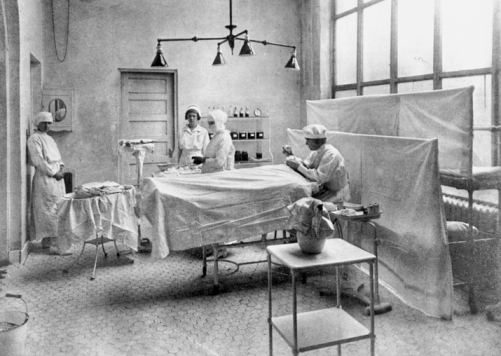 Well into the twentieth century, sick or injured North Carolinians were cared for primarily at home. In colonial times ill persons without families were looked after in almshouses. As contagious illnesses often arrived by ship, groups of private citizens in port communities began to set up facilities to quarantine incoming seamen who were ill and to assist victims of malaria and other coastal scourges. The first of these, Mount Tirzah Hospital, was built in Wilmington in 1835. In 1869 the state established a quarantine station and hospital at Beaufort Harbor.

The development of hospitals in North Carolina rested almost entirely with churches and associations of physicians into the twentieth century. Government played only a small role in this arena. Not until the passage of the federal Hospital Survey and Construction Act, known as the Hill-Burton Act, in 1946 did North Carolina government become involved in hospitals to any substantial extent. Under this legislation, the federal government provided up to 50 percent of construction funds for hospital projects approved by the designated agency in each state, with state and local funds providing the rest. Hill-Burton also introduced regulation, requiring that federally funded hospitals be licensed and meet minimum standards for their maintenance and operation. A total of $200 million in Hill-Burton funds financed 275 construction projects and added 7,486 new beds for medical care in North Carolina.

In 1848 the state established Dorothea Dix Hospital in Raleigh, its first facility for the mentally ill. The North Carolina Constitution of 1868 gave the state responsibility for such patients, and two more facilities were built in Goldsboro and Morganton later in the century. Hospitals providing general medical care, however, were slow in coming. So horrendous were battlefield conditions during the Civil War, and so futile were the well-intentioned attempts at care, that even years later efforts to establish civilian hospitals met with widespread public resistance. This attitude, along with the poverty that bedeviled Reconstruction, delayed the development of hospitals in the state.

St. Peter's Hospital, which opened in Charlotte in 1876, is credited with being North Carolina's first general hospital. Nineteenth-century Charlotte, like many communities throughout the South, lacked adequate medical facilities for poor and working-class citizens. The leading voice behind the new hospital was Jane Renwick Smedburg Wilkes, remembered as the "Godmother of Charlotte Hospitals." St. Peter's, originally called Home and Hospital, occupied two rooms on East Seventh Street. During its first year the facility moved to various locations throughout the city. In 1877 a local organization called the Busy Bee Society raised $273.42 and purchased a lot on modern Poplar Street, where the Home and Hospital of St. Peter's Episcopal Church began operations on 4 June. Fund-raising activities conducted by Jane and John Wilkes, as well as charity balls and monetary gifts from other philanthropists, kept the hospital open during its early years.

From the beginning, St. Peter's Hospital fought the public's fear of such institutions. Conditions in some nineteenth-century hospitals were so horrible that resistance to using them was common. Even though St. Peter's provided the finest medical care available, patients literally had to be forced to enter and local police officers stood guard to prevent rioters from shooting into the building.

Many of Charlotte's leading physicians practiced at St. Peter's, including R. E. M. Brevard and G. W. Pressly, who provided the first X-ray apparatus in a North Carolina hospital. The facility continued to grow and prosper until the late 1930s, when it became apparent to the board of directors that a larger hospital was needed to serve Charlotte's ever-growing population. St. Peter's Hospital closed on 7 Oct. 1940, when Charlotte Memorial Hospital opened. 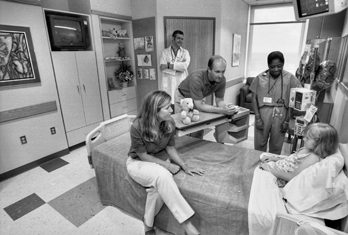 Initially, St. Peter's had admitted white patients only, but soon Jane Wilkes and other Charlotte women began to solicit funds for a hospital for African Americans; Trinity Episcopal Church of Southport, Conn., made the first financial contribution for its development in December 1882. The Episcopal Diocese of North Carolina then organized a Chapel of St. Michael for blacks in 1883. Two years later the diocese purchased a lot near the chapel for $400 "to be held for a hospital for colored." Good Samaritan Hospital was completed in 1891 at a cost of $4,400. Other hospitals then serving the African American community were the North Carolina State Hospital at Goldsboro (1880) and Leonard Hospital at Shaw University in Raleigh (1882).

During Good Samaritan's first six months of operation, 13 patients were admitted and treated. In 1893 the hospital provided care for 54 patients, 35 of whom were from Charlotte. Patients also came from outside the city and from South Carolina and Virginia. The institution operated on an annual budget of about $825. Ten years later, its patient list included individuals from North Carolina, South Carolina, Georgia, Virginia, and Martinique (West Indies). In the 1920s and 1930s Good Samaritan continued to expand its services and to build additions to the original building, located at 411 West Hill Street, between South Mint and South Graham Streets.

In the late 1950s Good Samaritan's facilities and professional standards came under scrutiny. The local chapter of the National Association for the Advancement of Colored People demanded that the hospital be closed and its patients be moved to the community-supported Charlotte Memorial Hospital. In the spring of 1960 the Episcopal Diocese donated Good Samaritan to the city of Charlotte. In 1964, after a steady decrease in the number of patients resulting from the desegregation of Charlotte Memorial, the city of Charlotte began operating Good Samaritan as Charlotte Community Hospital. The Community Hospital closed in 1982, following Charlotte Memorial's major expansion; the site was later used for a stadium built and operated by the Richardson Sports Group for the Charlotte Panthers, a franchise of the National Football League.

McCain Sanatorium, named for its longtime, innovative superintendent, Paul P. McCain, was a state-operated hospital established near Raeford in Hoke County in 1907 and first called the North Carolina Sanatorium for the Treatment of Tuberculosis. In addition to treating patients with the respiratory disease, the sanatorium contributed many innovations in health care, including a nurses' home on the site. In 1923 the General Assembly approved the expenditure of $100,000 for the construction of a "Colored Division" at the facility, adding 50 beds for the care of African Americans. After making many strides in the management of tuberculosis, the sanatorium closed in 1950. Taken over by the Division of Prisons in 1983, the structure became the McCain Correctional Hospital for minimum-custody male prisoners.

Rex Hospital, which opened in Raleigh in 1894, was by the early 2000s North Carolina's oldest existing general hospital. Its roots reached back to 1839, when the will of John Rex, a Raleigh tanner, provided for the establishment of a facility "for the sick & afflicted poor belonging to the City of Raleigh." Legislation authorizing the appointment of trustees was ratified in 1841, and five men were named to the board of trustees. As a result of investment problems and the economic turmoil created by the Civil War, however, progress on the hospital was stalled. It was not until 1893 that the board bought a hospital operated by St. John's Guild, an Episcopal organization. Located in the former home of Governor Charles Manly on South Street, Rex Hospital opened on 1 May 1894 and soon became known for its pioneering use of X-rays. Its affiliated school of nursing, the first in North Carolina, was organized by Mary Wyche, head nurse, who joined Rex in July 1894; the school operated until May 1975.

The need for better and larger quarters led to the demolition of the old Rex Hospital and the construction of a new building on the same site. After multiple expansions and moves, Rex by 1980 occupied a massive site on Lake Boone Trail. Additions to the complex in the 1980s and early 1990s included the Rex Cancer Center, Cardiac Catherization Laboratory, Wellness Center, Rex Family Birth Center, and Rex Convalescent Care Center, as well as the capacity to provide same-day surgery and open-heart surgery.

In 1948 Governor Robert Gregg Cherry approved the future site of the University of North Carolina Medical School and Hospital in Chapel Hill, allowing fund-raising and further planning to begin. The goal was to build a 400-bed hospital in addition to expanding the UNC Medical School. The huge expense anticipated for construction caused much political wrangling; in fact, the $5.29 million raised by 1949 barely covered the estimated base value of the project.

As far back as 1922 it had been agreed that a hospital would be a fitting memorial to North Carolinians who died in World War I. With this in mind, the General Assembly decided to call the new facility the North Carolina Memorial Hospital to commemorate the dead of all wars. A plaque noting the dedication was placed near the entrance. After construction delays, the hospital opened in September 1952, two months later than planned. But this postponement enabled almost all of the staff to be in place before the start of operations. The medical complex eventually included the North Carolina Neurosciences Hospital, the North Carolina Children's Hospital, and the North Carolina Women's Hospital.

By the early 2000s North Carolina had more than 200 hospitals and medical centers owned by the state, counties, cities, churches, or private companies. The majority of these were general acute-care facilities, with others providing psychiatric, rehabilitation, and specialty care. Most of the hospitals were not-for-profit institutions. Four facilities were teaching hospitals: Baptist Hospital, connected to the medical school of Wake Forest University, Winston-Salem; Duke University Hospital, Durham; Pitt County Hospital, operated jointly by Pitt County and the East Carolina University School of Medicine, Greenville; and the UNC Hospitals, Chapel Hill.

Hospitals in North Carolina were regulated by the Division of Health Services in the Department of Health and Human Services. Most of the these facilities were members of the North Carolina Hospital Association, a private organization working to improve hospital services.