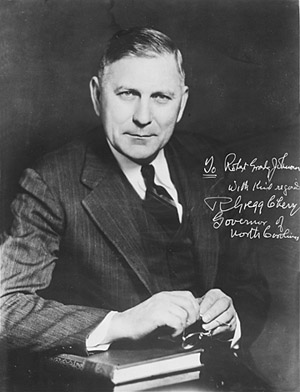 R. Gregg Cherry, a veteran of World War I, led the state through the closing months of World War II and the years of readjustment to a postwar economy, a period of general prosperity. The “Iron Major” was born near Rock Hill, South Carolina, on October 17, 1891. His mother, the former Hattie Davis, died when he was an infant. His father, a farmer and Confederate veteran, Chancellor Lafayette Cherry, died when he was seven. Young Cherry was raised by his uncle, Henry M. Lineberger, of Gastonia. In 1912 Cherry graduated from Trinity College (forerunner of Duke University), where he was captain of the basketball team. Two years later he completed a law degree at Trinity and returned to Gastonia to practice.

In 1917, with the entry of the United States into the World War, Gregg Cherry organized men from the Gastonia area into a unit that became Company A of the 115th Machine Gun Battalion, part of the Thirtieth Division. The outfit saw service in France and Belgium and was part of the force that cracked the Hindenberg Line. After the war Major Cherry was active in the National Guard. In 1921 Cherry married Mildred Stafford; they had no children.

While abroad Cherry had his name placed into contention for mayor of Gastonia. Shortly after his return he was elected to the post and then reelected in 1921. The voters of Gaston County sent him to the state House for five consecutive terms beginning in 1931. Initially opposed to a sales tax, Cherry changed his position and his support was instrumental in its approval in 1933. He served as Speaker of the House for the 1937 session, during which time he earned his nickname “Iron Major” for the firm guiding hand offered to his colleagues. In 1941 and 1943 he was elected to the North Carolina Senate. In 1944 Cherry defeated liberal Ralph McDonald in a bitterly fought Democratic gubernatorial primary and Republican Frank C. Patton in the fall. Cherry had the support of the political organization of O. Max Gardner and is often identified with the “Shelby Dynasty,” although he was from a neighboring county.

As governor Cherry expanded mental health services by increasing hospital facilities and personnel. The state acquired Camp Butner, used by the military during the war, for construction of a mental hospital. During his term the state committed to creating a four-year medical school at Chapel Hill. The compulsory age for attendance in the public schools was raised from fourteen to sixteen. Governor Cherry successfully advocated increased teacher salaries and laid the groundwork for the road-building program initiated by his successor Kerr Scott. Philosophically, Gregg Cherry was a conservative and, like his predecessor J. Melville Broughton, advocated conserving money to cushion the shock of postwar adjustment.

Personally, Gregg Cherry was rough-hewn, plain-spoken, and at times profane, with a fondness for whiskey and chewing tobacco. In 1946 he personally intervened and settled the Erwin Mills strike in Durham. When a white mob in Northampton County attempted to lynch a black man in 1947, the governor reacted swiftly to bring the parties responsible to justice. In 1948 he hosted President Harry S. Truman, with whom he had much in common, in Raleigh on the occasion of the dedication of the memorial at the Capitol honoring the three Presidents from North Carolina. That same year Cherry bucked the pressure of other Southern governors to support the Dixiecrat presidential bid of South Carolina Governor Strom Thurmond and remained loyal to the Democratic Party. After his term as governor Cherry returned to the practice of law in Gastonia.

R. Gregg Cherry, a Methodist, was a trustee of Duke University and the University of North Carolina. He died on June 25, 1957, and is buried in Gaston Memorial Park in Gastonia.