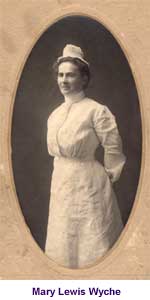 Mary Lewis Wyche, nurse, was born near Williamsboro in present Vance County, the daughter of Benjamin and Sarah Hunter Wyche. In 1889 she was graduated from Henderson College, where she had taught in the primary department while a student herself. Shortly afterwards she moved to Chapel Hill to keep house for her brothers, who were enrolled at The University of North Carolina; she also kept boarders and taught school. When she was no longer needed to assist her brothers, she gave thought to her own future and turned to medicine. Choosing nurses' training rather than medical school, she was graduated from the Philadelphia General Hospital in 1894 at age thirty-six.

Moving to Raleigh, Miss Wyche was active in the organization of Rex Hospital Training School for Nurses; of her first class of five student nurses, four were graduated. Three years later, in 1898, she resigned her post to enter private nursing in Raleigh. The next year she became nurse at the infirmary of the State Normal and Industrial College in Greensboro, and in 1901 she returned to Raleigh as a private nurse for a year.

In order to advance women in the nursing profession, Miss Wyche organized the Raleigh Nurses Association in 1902; in time it evolved into the North Carolina State Nurses Association. Also recognizing her own need for further training, she spent a year studying dietetics and massage in Philadelphia.

Through Miss Wyche's efforts the North Carolina General Assembly passed a law, signed by Governor Charles B. Aycock in March 1903, to raise nursing standards and to require the registration of nurses. In the same year she became superintendent of nurses at Watts Hospital in Durham, a position she held for ten years. During that time she was secretary-treasurer of the first Board of Examiners for Trained Nurses and served on the board for six years.

Still another successful project with which she was associated was the establishment of a home in Black Mountain for tubercular nurses. Miss Wyche together with Birdie Dunn, of Raleigh, who introduced the idea, coordinated the efforts of the State Nurses Association that led to its opening in 1913. No longer needed, the home was sold at the beginning of World War I and the money invested in Liberty Bonds. For several years afterwards Miss Wyche served as superintendent of nurses at Sarah Elizabeth Hospital in Henderson and then once again engaged in private nursing, first in Greensboro and then in Raleigh. During this time she led the movement to establish a prenursing course at the North Carolina College for Women in Greensboro, and she took the lead in seeking a school of nursing at Duke University in Durham.

In 1925, at age sixty-seven, she retired from nursing and returned to her family home, Wychewood, near Henderson, where she wrote The History of Nursing in North Carolina . She was an active member of the Methodist church.

Mary Lewis Wyche, The History of Nursing in North Carolina (1938)

UNC-TV, Nursing Now and Then: http://www.unctv.org/ncnursing/marylwyche.html