History and Impact of Malaria in North Carolina 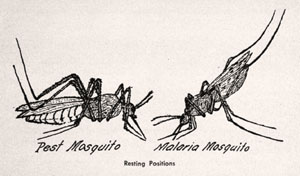 From the earliest attempts at colonization, North Carolina was plagued by malaria. Carried in the blood of the 15th century European explorers, and transmitted by the bite of the ubiquitous Anopheles mosquito, the disease found an easy foothold amongst the Native Americans. Successive waves of colonists, naturally settling near sources of water, provided a vulnerable and concentrated population on which the mosquitoes could feed. Millponds, wells, and open farmland (where water could pool and stagnate) also provided a rich breeding ground.


No reliable statistics regarding malaria morbidity and mortality exist for North Carolina prior to ~1900. Reports of intermittent chills and ague show up in early letters and reports, but nearly any fever might be described as "malarial" regardless of the cause. By the 1850's, when the Medical Society of the State of North Carolina began meeting and publishing their Transactions, the symptomatology was slightly more precisely understood, but even then much confusion existed as to nomenclature, since the disease was variously named intermittent, remittent, paludal, or estivoautumnal fever, as well as "ague" and "swamp fever."


Because of the prevalence of the disease, the medical establishment published widely on malaria and other types of fever. The etiology of the disease was of profound interest. The most popular theory of its cause was "miasma," that is, the odor given off by decaying vegetation in a hot and humid environment (the name malaria is from the Italian for "bad air").

Two physicians, Charles Johnson and Solomon Satchwell, engaged in a bitter published debate about the miasmatic theory in the 1850's, and Satchwell continued to publish his views widely in later years. Although the parasite responsible for the disease was isolated and identified in the 1880's, it wasn't until the turn of the century that the mosquito was discovered to be the vector by which malaria is transmitted. In the intervening half century, a variety of theories about the disease, its relationship to other diseases, and its cause, were promulgated and published in the Transactions of the Medical Society of the State of North Carolina.


With the disease still prevalent in the early 1900's, North Carolina, often partnering with the federal government, undertook several anti-malaria and anti-mosquito campaigns. An increasingly educated public, the aggressive use of chemical insecticides, and a reduction in available breeding places for mosquitoes, all contributed to a decline in the disease, and by the late 1940's, malaria had all but disappeared from the state.

About malaria. Center for Disease Control and Prevention. https://www.cdc.gov/malaria/about/index.html