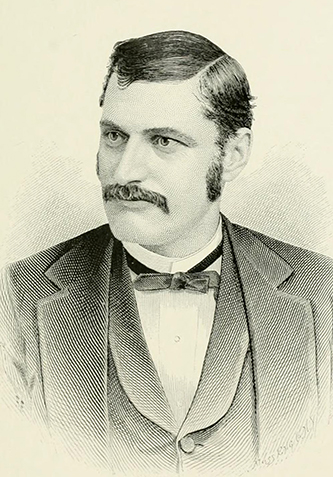 Harry Skinner, lawyer, Populist leader, writer, and businessman, was born in Perquimans County, the son of James C. and Elmira Ward Skinner. His ancestors had been active in the political affairs of North Carolina for three generations. He attended Hertford Academy before studying law at the University of Kentucky, from which he was graduated in 1874. Licensed to practice in 1876, he became a partner of Louis Charles Latham in Greenville and, in time, with others. From 1879 to 1886 he was aide-de-camp to Governor Thomas J. Jarvis, and it was from this service that he acquired the title of colonel.

A student of political economy, Skinner's greatest contribution was in the field of economic thought. His ideas on money and banking led him to publish an article on "A Productive Land Basis for Our National Bank Issue" in the Greenville Eastern Reflector and the Raleigh News and Observer in 1887. Skinner proposed that productive land rather than U.S. bonds serve as the basis for the issuance of bank notes. He pointed out that the retirement of bonds led to a contracted currency and that the existing system enriched northeastern bondholders and impoverished southern and western producers. In 1888 he published in the Reflector and the Progressive Farmer an article entitled, "The Hope of the South," which gained nationwide attention when it appeared in Frank Leslie's Illustrated Newspaper on 30 Nov. 1889. In it he proposed to extend to raw cotton the same rate of protection (47 percent) that was extended to manufactured cotton and thus raise the price of cotton to fourteen cents per pound. The plan involved the creation of government warehouses where producers could store their cotton in exchange for legal tender warehouse or cotton certificates. There is evidence to support the claim that Skinner was the father of the subtreasury scheme advocated by the Southern Alliance (National Farmers' Alliance and Industrial Union).

As a lawyer Skinner was ineligible for membership in the alliance, but he supported the farmers' movement. In January 1887 he represented Pitt County in the agricultural convention held in Raleigh that established the Farmers' Association, a short-lived organization absorbed in 1888 by the North Carolina Farmers' State Alliance. Always concerned about the problem of farm credit, he introduced a resolution to induce the General Assembly to provide financial relief for farmers. In 1890 Skinner was elected to the state house of representatives by a decisive majority, having waged his campaign on the subtreasury plan. In the legislature he advocated reduction of the interest rate to 6 percent and introduced a bill to prevent the sale of land under mortgage that did not bring 50 percent of its tax value. Among other legislation, Skinner introduced measures to establish an orphan's court and to name a committee to codify the laws of incorporation. He fought for the establishment of the Industrial Training School for Girls at Greensboro and for a railroad commission.

Although he was a staunch Democrat, in 1892 he joined the People's party. Nominated for governor by the third party, he agreed to accept only on condition that he would withdraw if his candidacy posed a threat to white supremacy. The Populist convention instead nominated Wyatt P. Exum. Skinner was then offered but declined the nomination for Congress, but in 1894 he relented and was elected—and reelected two years later. On Capitol Hill he was active on behalf of internal improvements, an industrialized South, and a protective tariff. He favored bimetallism and introduced a bill to issue bimetallic certificates that would be redeemed one-half in gold and one-half in silver at the ratio of 16 to 1. He proposed to cut official salaries by 33 1/3 percent in order to reduce the government deficit. And he introduced a bill to stabilize the price of cotton. His ideas, far in advance of his time, were embodied in the Federal Reserve Banking Act and the Federal Farm Loan Bank Act passed during Woodrow Wilson's administration and subsequently in New Deal farm legislation in the 1930s.

Skinner became a powerful figure in the North Carolina People's party and challenged Marion Butler for party control. Early in 1897 he broke with the Butler wing of the party and voted for the reelection of U.S. Senator Jeter C. Pritchard, a Republican. Skinner was defeated for reelection in 1898, when Populism was on the wane. He later joined the Republican party.

An advocate of education, Skinner served on the board of trustees of The University of North Carolina from 1898 to 1902. He was a Mason and a member of the Episcopal church. In 1878 he married Lottie Montiero, of Richmond, Va., who died ten years later. Of the six children born to them, two died in infancy and a third, Harry, Jr., was killed in an automobile accident in 1909. He was survived by three daughters: Ella Montiero (Mrs. A. M. Mosely), Lottie (Mrs. H. D. Bateman), and Winifred. In 1895 he married Ella Montiero, who bore a son, Francis Xavier; the son, who reached manhood, died before his father. Skinner was buried in Cherry Hill Cemetery, Greenville.

Samuel A. Ashe, ed., Cyclopedia of Eminent and Representative Men of the Carolinas, vol. 2 (1892 [portrait]).