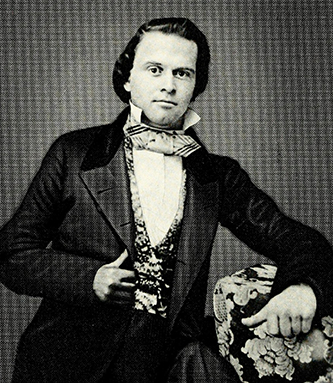 Peter Mallett Hale, newspaper editor and publisher, was born in Fayetteville, the son of Edward Jones Hale, the longtime publisher of the influential Whig newspaper, the Fayetteville Observer. His mother was Sarah Jane Walker, daughter of Carlton Walker, who had been a major on the staff of General Edmund P. Gaines in the War of 1812. Peter Hale had one sister, Sarah Caroline, who married George H. Haigh. Hale's younger brother, Edward Joseph, served with distinction as U.S. consul to Manchester, England, and as minister to Costa Rica.

Peter Hale received his early education in the schools of Fayetteville. In June 1846, he entered The University of North Carolina. At his graduation in 1849, he was awarded first distinction along with Thomas Jefferson Robinson and Kemp P. Battle and he delivered the salutatory address. In 1850, he went to Raleigh where he studied law under Judge George E. Badger. Sometime later he returned to Fayetteville to aid his father in the publication of the Observer.

At the outbreak of the Civil War, Hale enlisted as a private in the Fayetteville Independent Light Infantry. He served in the Bethel Regiment under General D. H. Hill and fought in the Peninsula campaign. When his enlistment term ended, Hale returned to Fayetteville and resumed work on the Observer. However, when a Union attack on Fort Fisher seemed imminent, he reentered the army briefly. He attained the rank of major before resigning to rejoin his father in the newspaper business.

In 1865, troops under General William T. Sherman destroyed the offices and property of the Observer, and in the following year Hale and his father moved to New York City where they established the publishing firm of E. J. Hale and Son. While residing in New York, Peter Hale was offered the presidency of the New York Publishers' Association, but he declined the honor. 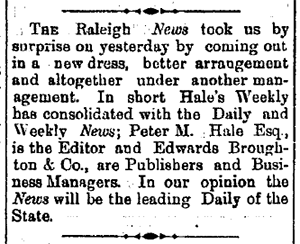 The Fayetteville native returned to North Carolina in 1876, and for the next three years he and Colonel William L. Saunders published the Raleigh Observer. As editor of the Observer, Hale advocated the development of North Carolina's natural resources and supported a strong program of internal improvements. When the newspaper began to experience financial difficulties, Hale resigned but he soon initiated publication of Hale's Weekly, which was merged with the Raleigh News in 1880. Hale served briefly as editor of the News, and between 1880 and 1885 he published the strongly pro-Democratic Raleigh Register. In addition to his journalistic accomplishments, Hale was the author of several books including In the Coal and Iron Counties of North Carolina (Raleigh, 1883) and The Woods and Timbers of North Carolina (Raleigh, 1883). In February 1885 he became state printer, a post he held until 1887.

Hale, who had suffered for more than a year from cancer of the mouth, died in Fayetteville and was buried in Cross Creek Cemetery. He was survived by four daughters and one son. His wife, Mary Badger, whom he had married on 1 Oct. 1855, died in 1884.