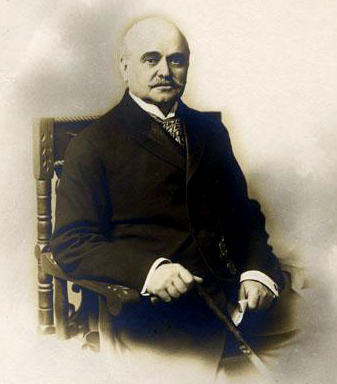 Edward Joseph Hale, journalist and statesman, was born in Fayetteville. His father, Edward Jones Hale, was the longtime publisher (1825–65) of one of the South's leading Whig newspapers, the Fayetteville Observer. His mother, Sarah Jane Hale, was a descendant of Elder Brewster of the May-flower, and her father, Carlton Walker, had been a major on the staff of General Edmund P. Gaines in the War of 1812. Peter Mallett Hale, Edward Joseph's oldest brother, helped establish the Raleigh Observer in 1876.

Edward Joseph Hale received his early education at Donaldson Academy in Fayetteville, and in 1857 he entered the sophomore class at The University of North Carolina. He capped a brilliant academic career by graduating valedictorian of his class in 1860; fifty years later, the university awarded him an LL.D. After graduation Hale joined his father and brother as a partner in the publication of the Fayetteville Observer. At the outbreak of the Civil War, he volunteered as a private in the Fayetteville Independent Light Infantry, which became Company H, First North Carolina Volunteers. He served throughout the war from Bethel to Appomattox, acquiring a reputation for extraordinary valor and rising to the rank of major in James H. Lane's brigade. Having lost his fortune when General William T. Sherman destroyed the press and plant of the Observer, after the war Hale moved to New York City and for a time was associated with his father in printing and publishing. Afterwards he became an associate in a large wholesale firm.

In 1872, failing health forced him to retire to Hickory, N.C., where for the next decade he managed several estates entrusted to him. In 1883, he returned to Fayetteville and resumed publication of the Observer. The following year, as a member of the platform committee at the North Carolina Democratic state convention, he drafted the party's tariff plank. He also was a delegate to the Democratic National Convention in Chicago. His services to the party were rewarded in 1885, when President Grover Cleveland appointed him consul to Manchester, England.

The former editor's tenure as consul was crowned with success. According to Secretary of State James G. Blaine, his record surpassed that of any official—diplomatic or consular—sent abroad by President Cleveland. Henry White, onetime ambassador to France and Italy and an attaché at the London legation while Hale was at Manchester, recalled that Hale was the first American to be accepted as a social equal by the British nobility. In 1886 he was elected an honorary life member of the famous Cobden Club, a distinction accorded to only a handful of southerners and to only one other North Carolinian, Zebulon Vance. The Fayetteville native also was invited to join the British Association for the Advancement of Science, St. George's Club, the Alorender Club of Manchester, and the Albemarle Club of London. When the newly elected Republican administration of Benjamin Harrison relieved him of his consular duties in 1889, Hale accepted an important position with the Bengal Indigo Manufacturing Company, Limited. He went to India on company business and after his return declined a lucrative offer from the firm to remain in England as its barrister. Prior to his departure for America, Hale was named vice-president of the International Congress on Internal Navigation, and before that prestigious organization he presented his country's case for a Nicaraguan canal.

After spending the year 1891 in New York as commissioner for the Manchester Ship Canal, Hale returned to Fayetteville and once again assumed the editorship of the Observer. After Grover Cleveland's reelection to the presidency in 1893, he was offered the Turkish mission and was considered for the post of minister to Russia, but the North Carolinian turned down both positions. During the next two decades, he devoted much of his time and energy to promoting the interests of his city, state, and party.

Hale was the chief advocate of a scheme for the canalization of the upper Cape Fear River, and it was largely through his efforts that the United States Congress approved the project in 1910. In connection with his interest in inland water transportation, he served as director of the National Rivers and Harbors Congress and as president of the Upper Cape Fear Improvement Association. A leader in Fayetteville community affairs, he was chairman of a committee that obtained a new charter for the city in 1893 and president of the Chamber of Commerce in 1909 and 1910. He also headed successful campaigns that resulted in the construction of a municipal waterworks and the paving of the town's streets. Hale attended St. John's Episcopal Church and for a number of years was a vestryman. At the state level he was a trustee of The University of North Carolina (1899–1915) and in 1910 was elected to the board's Executive Committee. A loyal Democrat, Hale attended all the party's national conventions between 1896 and 1912 and for a time he served on the party's state Central Committee. In 1902, the former Confederate officer was an unsuccessful candidate for North Carolina's Sixth District congressional seat, but in 1913 he reentered public service as minister to Costa Rica. Although he returned to the United States in April 1917, he officially held the position of minister until 1921.

Hale was married twice, the first time on 15 Jan. 1861 to Maria Rhett Yeamans, the oldest daughter of Thomas and Eliza Yeamans of Hailbron in Chatham County. She was descended from Sir John Yeamans, a governor of North Carolina's Clarendon County during the Proprietary period. Edward Joseph and Maria Hale were the parents of four children: Edward J., Jr., who succeeded his father as editor of the Fayetteville Observer (1914–19); Frederick Toomer; Louis Bond, who died in 1915; and Thomas H. Maria Hale died in November 1902. In 1905, Hale married Caroline Green Mallett, the daughter of Charles B. Mallett, onetime president of the Cape Fear and Yadkin Valley Railroad. Hale died at his Haymount home in Fayetteville. Funeral services were held at St. John's Episcopal Church, and he was buried in Cross Creek Cemetery.

The Edward Joseph Hale Papers in the Southern Historical Collection at the University of North Carolina Library contain copies of a daguerreotype made when Hale was seventeen and of a photograph made in 1890.

Fayetteville Committee, A Short Sketch of the Life of Major E. J. Hale (1910).