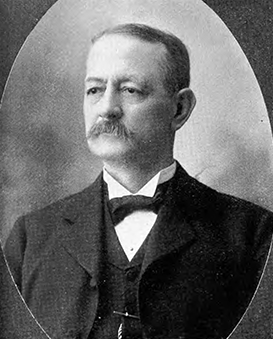 Charles Manly Busbee, attorney, was born in Raleigh, the eldest of the four sons of Perrin Busbee (22 Oct. 1816–16 Sept. 1853) and Anne Eliza Gales Taylor (13 Oct. 1825–23 Jan. 1892); portraits of Perrin and Anne Busbee by Garl Browne hang in the North Carolina Museum of Art. Charles Busbee's children thought that he was named for the celebrated Whig leader Governor Charles Manly, who was a close friend of Perrin Busbee. In 1863, Charles Busbee left Hampden-Sydney College in Virginia, where he had completed the sophomore year, to enlist in the Fifth North Carolina Infantry. The following year he was captured by the Union forces during the Battle of Spotsylvania Court House. After several months of captivity in Union prisons, including that on Sullivan's Island, S.C., where he was exposed to Confederate fire in retaliation for similar action taken by the Confederate garrison at Charleston against Union prisoners, Busbee was released in a prisoner exchange. He rejoined his regiment in time to participate in the final hostilities in the defense of Petersburg. Paroled after the surrender at Appomattox Court House, Sergeant-Major Busbee returned on foot to Raleigh, where his mother had difficulty recognizing her son in his bedraggled condition.

Through the munificence of Miss Sue Devereux, a friend of his mother's, Busbee was enabled to spend a year and a half at The University of North Carolina as a law student. On 14 Jan. 1867 he was licensed to practice in the courts of pleas and quarter sessions. A year later he was admitted to the bar of the superior courts of law and equity. Upon the admittance of his younger brother, Fabius Haywood, to the practice of law, the two formed a partnership. Subsequently, the brothers joined Judge E. G. Reade of Raleigh in the formation of the law firm of Reade, Busbee and Busbee. In his later years, Charles Busbee became a law partner of ex-Chief Justice James E. Shepherd; at the time of his death, Busbee was in partnership with his son Perrin.

Busbee served briefly as Wake County register of deeds shortly after his return to Raleigh in 1865. He was not an ambitious politician, however, although he served a term in the state senate in 1874 and one in the state house of representatives in 1884. These tours seem to have been undertaken in response to the wishes of his friends and associates, who held Busbee in great esteem. When, during a long convalescence from a near-fatal illness, his ability to practice law actively was impaired, Busbee's friends obtained for him an appointment by President Grover Cleveland as postmaster of Raleigh. He served in this post from 21 Mar. 1894 to 21 May 1898. Busbee's influence in the political field also complemented the efforts of his brother Fabius in contributing to the successful reorganization of The University of North Carolina in 1875.

Busbee was a devoted and energetic member of the International Order of Odd Fellows. He became a member of Manteo Lodge, No. 8, in 1870 and retained membership until his death. His state-wide popularity and leadership ability were reflected in his rise in the organization's councils; he achieved the highest office in the society when he was elected grand sire of the sovereign Grand Lodge of the world for the 1890–92 term.

In the summer of 1891, Busbee suffered a massive stroke that paralyzed his left side and confined him to bed for many months. Although leading medical men at Johns Hopkins Hospital in Baltimore despaired of his life, Busbee eventually achieved nearly complete recovery, left with only a slight limp. His recovery was attributed to his boundless determination to live, the unremitting care of his wife, Florence, and the constant encouragement of his legion of friends. After several years of painful convalescence, Busbee was able to resume active law practice until his death eighteen years after his initial seizure.

A lifelong member of Christ Episcopal Church in Raleigh, Busbee was interred in Oakwood Cemetery there.