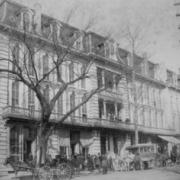 De Witt Clinton Benbow, businessman and philanthropist, was born near Oak Ridge in Guilford County, the youngest of five children of Charles Benbow and Mary Saunders. His earliest ancestor in America emigrated from Wales in 1718 as a boy of fifteen, bound for his passage money to a Quaker who settled first in Pennsylvania and then in North Carolina. Quakers became numerous in Guilford County, and some, like the Benbows, prospered. After a basic education near home, De Witt Clinton was able to attend the Moses Brown Friends' School, Providence, R.I., and the Baltimore College of Dental Surgery. He received his professional degree in 1855, returned to his native state to practice at Fayetteville, and became secretary and youngest charter member of the North Carolina Dental Society. Benbow practiced dentistry for six years. Part of his work was itinerant: he would advertise locations and hours in the newspapers and then journey to Wilmington, Raleigh, Greensboro, and other places to perform his services. Increasingly during this period he ventured into business. He bought and operated the Cross Creek Cotton Factory, where he had once worked as a boy, and invested in valuable property, expecially large tracts of pine land. Fayetteville in 1861, however, was an uncomfortable spot for an able-bodied pacifist who appeared to be profiting while other young men were marching off to war. The hostility, felt most keenly by his wife, was such that Benbow hired a substitute to fight, sold both his dental practice and the cotton mill, and moved to Greensboro. 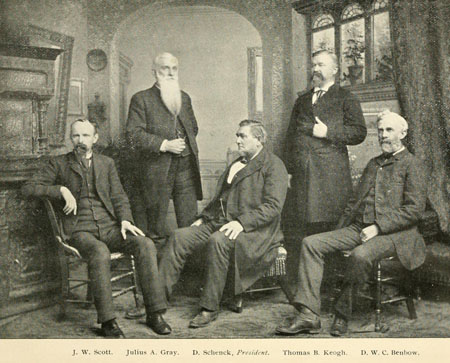 In that small county seat he found a fair field for his enterprise. He acquired property, erected buildings, and engaged in merchandising on South Elm Street, the town's main thoroughfare. Then, convinced that Greensboro's location at the junction of the North Carolina and Piedmont railroads was justification, he decided to build a hotel. When it was still only partly finished, about sixty newspaper editors from New York, Pennsylvania, and New Jersey visited Greensboro as part of a long-planned excursion into the upper South. Their welcome and entertainment by Benbow, other leading men, and the general populace stimulated widespread, favorable publicity. The hotel formally opened on 30 May 1871, with ex-governor Zebulon B. Vance, who made a speech to the northern editors, and was the first to sign the register. Completed the next year, the Benbow House astonished almost everyone with its four stories, seventy-four rooms, and cost of $40,000. The doctor's diagnosis was correct: a first-class hotel would attract commercial travelers and other patrons from scores of miles around. A dairy, a vegetable garden, and a vineyard were adjuncts of the establishment. But there was no bar; the proprietor used neither alcohol nor tobacco. Unquestionably, the Benbow provided major impetus toward transforming Greensboro from a little town to an important city.

Benbow's success in business continued for the next twenty years. Of greatest significance in his career between 1872 and 1892 was his role as civic leader and generous benefactor. As an alderman in the mid-1870s, he campaigned, against strong opposition, for graded schools both white and black and for a city market. When educators were struggling to establish the school that later became Bennett College for black women, he assisted with both money and leadership. Similarly, he rescued the white Greensboro Female College. During reconstruction of its fire-gutted main building, the work superintendent died in a fall, and a bank failure deprived the institution of most of its funds. Benbow immediately took charge of the work and paid all wages and bills.

Beginning in 1879, Benbow called for the establishment of a school to train young women as teachers in the public schools. Twelve years later a crusade led by Sidney M. Finger, Edwin A. Alderman, Charles D. McIver, and Benbow culminated in the establishment of the Normal and Industrial School for White Girls. In this instance and in that of the Agricultural and Mechanical College for Negroes, established the same year, 1891, Greensboro outbid other cities for the schools. Benbow was the acknowledged leader of both efforts. In launching his campaign, he made what his friends regarded as "the speech of his life." He rallied businessmen and other citizens to subscribe privately $30,000 for the Normal School and $8,000 for the A. & M. College, so that Greensboro would get these institutions even if the required bond issues failed to pass. This kind of support so pleased the people that their approval at the ballot box was almost unanimous.

From 1881, Benbow served as a trustee of the Quaker school that evolved into Guilford College, and in 1891 he was present at the establishment of the Greensboro Monthly Meeting of Friends. He was one of five incorporators of the Guilford Battleground Company. In politics he affiliated with the Republicans.

By 1892, Benbow's fortune was estimated at about half a million dollars. In addition to various other enterprises, he had invested in the North State Improvement Company, which undertook to build the Cape Fear and Yadkin Valley Railroad. Though the railroad did benefit Greensboro and the rest of its territory, the company was ruined by the financial panic of that time. The principal men, involved in a desperate move, decided to endorse notes individually, and this decision was their undoing. For ten years, Benbow defended himself against various lawsuits, most of which were eventually compromised, but the strain and his age took their toll. One consolation there was, nevertheless: he lived to supervise the building of a new Benbow House, to see his son operate it, and to reside there himself. It was altogether fitting that, when he died, the services were conducted at the new Benbow by two Friends ministers. Burial was at Greene Hill Cemetery.

Mary Elizabeth Scott, whom Benbow married on 30 Nov. 1857, had died five years earlier. Three of their children survived them: Charles D., who became closely associated with his father's business interests and who later played a part in the development of St. Petersburg, Fla.; Mrs. Mary B. Crawford; and Lily.

B. D. Caldwell, Founders and Builders of Greensboro (1925 [portrait]).

Guilford Battleground Co. A memorial volume of the Guilford Battle Ground Company. Organized May 6, 1887, at Greensboro, N.C. It contains a brief history of the battle of Guilford Court House, an account of the organization and progress of the Guildford Battle Ground Company, biographical sketches, and a full account of the Holt monument and its dedication, July the 4th, 1893. Greensboro, N.C., Reece & Elam, printers. 1893. https://archive.org/details/memorialvolumeof00guil (accessed April 8, 2013).

Guilford Battleground Co. A memorial volume of the Guilford Battle Ground Company. Organized May 6, 1887, at Greensboro, N.C. It contains a brief history of the battle of Guilford Court House, an account of the organization and progress of the Guildford Battle Ground Company, biographical sketches, and a full account of the Holt monument and its dedication, July the 4th, 1893. Greensboro, N.C., Reece & Elam, printers. 1893. https://archive.org/details/memorialvolumeof00guil (accessed April 8, 2013).