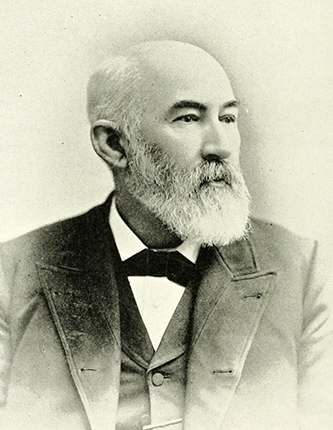 Sidney Michael Finger, educator, state assemblyman, merchant, and manufacturer, was born in Lincoln County, the son of Daniel (1806–88) and Sallie Finger (1813–57). He was the great-grandson of Peter Finger (ca. 1730–ca. 1793), who emigrated from Germany by way of Pennsylvania to settle on Leeper's Creek near Sherrill's Ford, Lincoln County, before the American Revolution. Daniel Finger was one of the founders and elders of St. Matthews German Reformed Church, Lincoln County, and gave land adjoining the church lot for the building of a common school. It was at a St. Matthews Church camp meeting that the idea for establishing a college to train ministers originated. In 1851 the church founded Catawba College at Newton, Catawba County.

Until he was eighteen, Sidney Michael Finger followed in his father's occupations as a farmer and tanner, attending the four-month school near his home. He entered Catawba College in 1855. During vacation months he taught school, and during half of his four years at Catawba he served as a tutor. In 1859 he was accepted in the junior class at Bowdoin College, Maine, where he received a B.A. degree in May 1861. For a short time he taught school in Bishopville, S.C., before returning home to join the Confederate Army. On 22 Mar. 1862 he enlisted in Lincoln County and subsequently joined Company I, Eleventh Regiment, North Carolina Troops, as a first corporal. By the end of the war he had achieved the rank of major and was responsible for tax in kind for the state of North Carolina. He was paroled at Charlotte on 3 May 1865; thereafter he was generally addressed as Major Finger. His three brothers were casualties of the war.

During the Civil War Catawba College lost its endowment and but for the efforts of the Reverend Jacob C. Clapp would have closed entirely. Following his release from the army, Finger took up residence in Newton and with the Reverend Mr. Clapp conducted the Catawba English and Classical High School, serving as associate principal and teacher. On 22 Dec 1866 Finger married Sarah Hoyle Rhyne (24 Feb. 1839–17 May 1903), daughter of Daniel Rhyne (1795–1875) and Louisa McGee Rhyne (b. 1801) of Gaston County. He and his wife were active members of Grace Reformed Church in Newton. In 1871, Finger took an A.M. degree at Bowdoin. Three years later, with the arrival of a competent staff at Catawba and because of ill health, he retired from the school.

In 1872 Finger entered politics as mayor of Newton. Somewhat unexpectedly, he was nominated by the Democratic party and elected to represent Catawba County in the 1874–75 General Assembly. At that session he served on the education committee and was chairman of the house branch of the joint committee on enrolled bills. In the following election he was returned to the legislature as a senator representing the Thirty-seventh District, comprised of Catawba and Lincoln counties. In the 1875–76 General Assembly Finger was appointed to the committee on claims and to the senate branch of the joint select committee on state debt; he was also chairman of the committee on education. It was at this legislative session, held during the closing days of Reconstruction, that the public school law was consolidated and updated and the rudiments of a postwar common school system established. Finger again returned to Raleigh as a senator representing his district in the General Assembly of 1881. He served as chairman of the committee on the state debt and as a member of three other committees—education, finance, and internal improvements. Once again, the school law was rewritten; significantly, the law of 1881 provided the foundation for North Carolina's modern public school system.

In the fall of 1882 Governor Thomas J. Jarvis appointed Finger to the first board of directors of the Western Insane Asylum at Morganton; that board, which assumed responsibility from the building committee, prepared the hospital to receive patients in April 1883. During his second year on the board, Finger was its president.

In 1884, Finger was elected superintendent of public instruction on the Democratic ticket and served for two terms (1 Jan. 1885–31 Dec. 1892). One of the first tasks he set for himself was to review textbooks recommended for use in the schools. Upon finding that none of the school readers included mention of the South, he rejected them. Before accepting new readers he examined the page proofs not only to assure adequate coverage of the subject but also to see that the South was treated justly. Throughout his administration Finger worked assiduously to professionalize teaching by establishing high standards for the training of teachers in subject matter as well as in pedagogical methods and school management. In his biennial reports to the governor he recommended, among other things, compulsory school attendance, federal aid to education, vocational training, the establishment of at least one library in each school district, and a restriction on the employment of children in factories. He successfully pressured the General Assembly to authorize increased local taxes to finance the four-month school term promised in the state constitution; however, he was unable to persuade the legislators to make a direct appropriation in support of the school system. In addition to his duties as supervisor of public schools for whites and Negroes throughout the state, he served as secretary of the Board of Education and was state administrator of the Peabody Fund. Upon Finger's recommendation, the General Assembly of 1889 abolished the ineffectual normal school system and appropriated funding for teacher institutes to be held for one week in each county. Superintendent Finger was charged with the management of these ninety-two institutes. He, with the advice of the Board of Education, assembled an excellent roster of educators to travel across North Carolina making available abbreviated normal school curriculums to teachers and to the interested general public.

At the Democratic state convention in 1893, Finger was nominated for another term as superintendent of public instruction, but his name was removed as a candidate in order to place a Baptist on the ticket. He returned to Newton, where he continued to be active in local and state politics and looked after his longtime investments in a general store and in flour and cotton mills. In 1894 he published a textbook entitled Civil Government in North Carolina and the United States: A School Manual and History. Although a self-described conservative and—like many contemporaries—paternalistic toward the Negro, Finger believed that qualified blacks should have an opportunity to advance professionally and economically. With W. M. Kendrick, he edited Edward Augustus Johnson's A School History (Fourth Grade Reader) of the Negro Race (1894) and recommended its use in the Negro schools of North Carolina.

The achievement in which Finger took most pride was the establishment of the North Carolina State Normal and Industrial School at Greensboro. In 1886 he, along with A. M. Alderman and C. D. McIver, was appointed by the State Teachers Assembly to propagandize the need for a normal school for women. These three men wrote the legislation enacted by the General Assembly in 1891 authorizing the selection of a site and the building of such an institution, and they saw that the law was expeditiously implemented. After the school opened in 1893 Finger served on the board of directors, attending business meetings and commencements with much pleasure. He also was a trustee of The University of North Carolina from 1893 until his death.

Finger and his wife had no children. Both were buried at Eastview Cemetery, Newton, beside Finger's father, Daniel.

Edward A. Johnson, A School History of the Negro Race in America (1969).

Alfred Nixon, The Finger Family of Lincoln County with a Brief Sketch of Saint Matthews Church (1903).

Banks J. Peeler, A Story of the Southern Synod of the Evangelical and Reformed Church (1968).

Finger, Sidney Michael. Address to the Department of Superintendence of the National Educational Association, at Washington, D.C., on the educational and religious interests of the colored people of the South, February 24, 1886. [s.l. : s.n.]. 1886. https://archive.org/details/addresstodepartm00fing (accessed September 5, 2013).