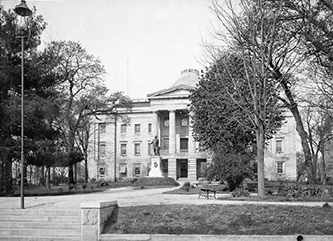 Union Square, located near the center of Raleigh as laid out in 1792, was designated as the site for the state legislature and served as its location for almost 175 years. The original statehouse, or capitol building, was a rather simple structure built in the square in 1794. After it was destroyed by fire in 1831, an elegant new Greek Revival capitol was erected on the same site and opened in 1840. Outgrown and abandoned by the General Assembly in 1961, the State Capitol now stands restored as the office of the governor and lieutenant governor and as a North Carolina State Historic Site.

Activity on Union Square's surrounding grounds started early and lends itself to division into two distinct phases-functional and commemorative. The functional phase of Union Square's history began in 1792 with the construction of a plank-and-rail fence around the square, replaced with a decorative wrought iron railing in 1848 (then removed in 1899). In 1795 Thomas Atkins constructed outhouses in the northeast and northwest corners of the square, which remained until an indoor plumbing system was installed in the capitol in the 1880s. A growing bureaucracy demanded more space than the statehouse could provide, and in 1814 a one-story, brick office was erected for the governor; it was located where the statue of George Washington now stands and served the state's governors until 1840. Nine years later it was sold and removed from the grounds. The 1816 General Assembly ordered a new office for the secretary of state to be built off the southeast corner of the capitol building. Occupied only by William Hill and his staff, the structure was sold and removed in 1849. A new building was erected for the secretary of the treasury in 1824, also in the southeast quadrant of the square. When the building ceased to be used is not known, but it may have been around 1849, when the square was being cleared of unneeded structures after government officials had moved into the new and larger capitol (1840). One structure not removed was the arsenal, constructed in 1828 to house the military supplies of the state. It stood in the southwest corner until its demolition in 1907, having served as a storage house for nearly 40 years.

Union Square's commemorative phase covers virtually all of the twentieth century. The honoring of individuals important to state's history began in 1900 with a statue of Zebulon B. Vance, followed by tributes to Worth Bagley (1907), Henry Lawson Wyatt (1912), Charles D. McIver (1912), Charles Brantley Aycock (1924), and Samuel A'Court Ashe (1940). Groups receiving commemoration include North Carolina's Confederate soldiers (1892), women of the Confederacy (1914), three U.S. presidents (Andrew Jackson, James K. Polk, and Andrew Johnson; 1948), Vietnam veterans (1987), and veterans of World Wars I and II and the Korean War (1990). Landscaping in 1928 changed the physical appearance of Union Square and led to the present-day walkways and the plantings that represent the variety of trees, flowers, and shrubs native to North Carolina. 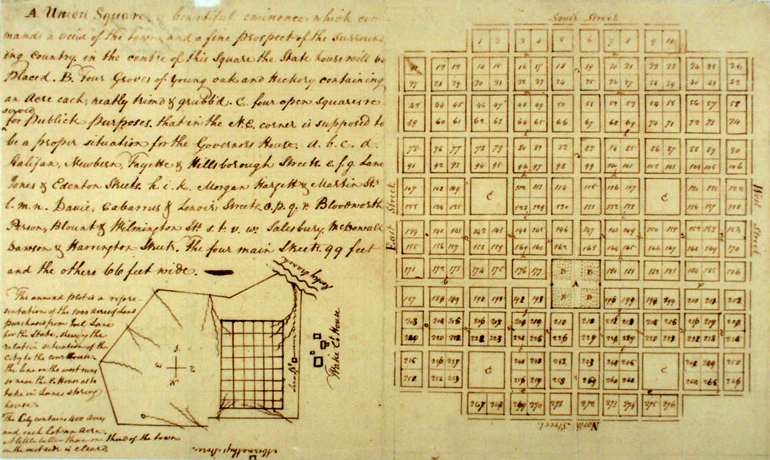 Cross, Heroes and Heroines on Union Square: The Statues and Monuments on Union (Capitol) Square at Raleigh, North Carolina (n.d.).