When communist North Korea first invaded its southern neighbor, North Carolina's entire congressional delegation supported President Harry Truman's use of U.S. troops to combat the aggression. On 28 June 1950 Senator Clyde Hoey voiced the general consensus that the president's action was justified. Chatham County's representative was optimistic that with an American show of force, the North Korean offensive would "fizzle."

North Carolina vigorously mobilized for war, deploying state National Guard units to Fort Jackson for additional training by early July. The Air National Guard was also alerted to prepare for active duty. After the federal government ordered the state to open 101 local draft boards immediately and to call up 610 men by mid-September, Raleigh leaped from nineteenth to 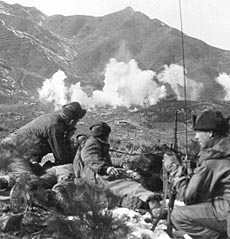 first place among southern induction centers in monthly recruitment. In addition, the Wilmington shipyard was reactivated with the potential to employ 21,000 men.

More than 177,000 North Carolinians served in the Korean War, with 784 killed and 201 listed as either prisoners of war or missing in action. The Medal of Honor was awarded to Jerry Crump of Charlotte, Charles George of Cherokee, and Bryant Womack of Mill Spring. George was one of three Native Americans to receive the medal for service in the Korean War.

The state was not spared the political upheaval associated with the conflict, which ended in a stalemate and a cease-fire, established on 27 July 1953. While newspapers ran a regular column detailing war casualties, the House Un-American Activities Committee began investigating five North Carolinians for communist affiliations. Some North Carolina veterans also marched on the State Capitol to demand their service bonus, reminiscent of the famous bonus march two decades earlier.