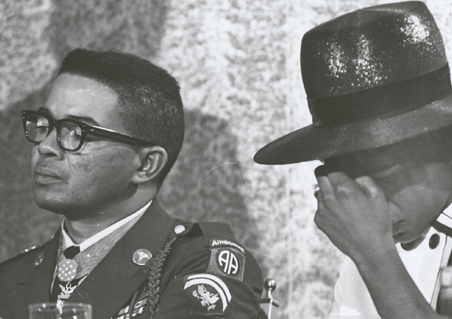 The Vietnam War, fought in Southeast Asia from 1957 to 1975, was a protracted, ultimately unsuccessful attempt by the United States to prevent North Vietnamese communists from overrunning South Vietnam. U.S. participation in the conflict caused sufficient national turmoil to divide the nation and alter its future course. The financial cost of the war was $150 billion, and more than 58,000 Americans were killed.

As they did in World War II and the Korean War, North Carolina's numerous military installations provided training, supply, and support for many soldiers and airmen who served during the Vietnam era. Fort Bragg was at the forefront of U.S. involvement in the war when the Fifth Special Forces Group (Airborne) was activated in 1961. This unit, known as the Green Berets, trained personnel in counterinsurgency for deployment in the Republic of South Vietnam. On 11 July 1963 Maj. Gen. William C. Westmoreland arrived to take command of Fort Bragg. Westmoreland became deputy chief on 2 Mar. 1964 and later commander of U.S. forces in Vietnam. More than 200,000 young men underwent basic combat training at Fort Bragg between 1966 and 1970. At the peak of the war in 1968, the base's military population reached 57,840.

From December 1961 until the spring of 1963, the 464th Troop Carrier Wing rotated aircraft and crews from Pope Air Force Base to Tan Son Nhut and Da Nang for airlift duties in South Vietnam. Popularly referred to as "Mule Train," after the military codeword for the first squadron to be deployed, the Pope mission was the first conventional U.S. Air Force unit to see action in Vietnam. As the United States became more involved in the war, the need to train large numbers of aircrews for the unique capabilities of the C-130 led to the organization of an aircrew replacement training unit at Pope Air Force Base. The drop zones, low-level routes, and dirt landing zones at Fort Bragg became familiar to many men bound for Southeast Asia.

Throughout the Vietnam War, Marine Corps Air Station Cherry Point deployed three A-6 Intruder squadrons to the Far East and was a constant source of replacements for aircrews and enlisted aviation personnel. Camp Lejeune was an essential base for training and deploying Marine Corps personnel to Vietnam.

Lawrence Joel (pictured with wife Dorothy) of Winston-Salem was the first African American to receive a Medal of Honor, 1967. Image courtesy of Digital Forsyth. Available from http://www.digitalforsyth.org/photos/8698 (accessed September 11, 2012).

Persons from North Carolina who died in the Vietnam War, the Virtual Wall at the Vietnam Veterans Memorial: http://www.virtualwall.org/istate/istatnc.htm

Do you assist with locating

Do you assist with locating living or deceased U.S. Marine Corp Veterans who served in Vietnam and were stationed in Cherry Point? Please email me to discuss. Thank you.

Thank you for visiting NCpedia and asking a question. I am forwarding your request to our reference team.