Overview of Religion in NC

For many North Carolinians, participation in some form of organized religion is an important part of life. A survey conducted under the Association of Statisticians of American Religious Bodies (ASARB) and published by the Glenmary Research Center reports that in 2000 there were 86 religious groups in the state and that 3,651,416 people, nearly half of the state’s population, belonged to one of these groups. Most of these groups are Christian denominations but included also are Baha’i, Hinduism, Islam, Judaism, and other faiths. (See the source for Table 1 for a complete citation of the Glenmary report, which is copyrighted.)

The Glenmary report provides statistics on the number of religious adherents, a term that is more inclusive than members. Adherents are defined as “all members, including full members, their children and the estimated number of other participants who are not considered members.” The concept is used to provide more comparability in the statistics among the various denominations that define membership in different ways.

Religion is more than theology or issues of faith and belief. It is as well an important aspect of the cultural life of a community and it is in this sense that it is examined here. For example, in many cases people belong to the particular denomination that they grew up with in their families, especially so in the past. As a result, religious participation is sometimes associated with particular population groups. Historical examples in North Carolina include Scots and Scots-Irish settlers who brought Presbyterian churches with them as they came into the state. Similarly, early German immigrants established Lutheran churches where they went. Figure 1 illustrates how the establishment of Presbyterian churches has been used to mark the migration of Scots-Irish settlers into the South between 1750 and 1800. As will be shown later, elements of these historic patterns linger today in the contemporary distribution of Presbyterians, Episcopalians, and Lutherans.

In addition, religious groups have contributed to the life of North Carolina in a variety of ways. For example, all 37 of the independent colleges and universities in the state were founded by various religious bodies. These associations have weakened in many cases today, but the fact remains that these institutions of higher education are here today because of the initiative of religious denominations.

More currently, statistics on the growth of Catholic congregations measure the recent in-migration of people from the northeastern US and of Hispanics into North Carolina and, for others, retirees who have moved to the state appear to have brought their previous denominational ties with them.

On the other hand, it appears that denominational loyalty has weakened considerably and people are more and more willing to switch church memberships from one denomination to another. For example, a survey of North Carolina Episcopalians that was conducted in the early 1990s found that a substantial number of parishioners had come from other denominations and that a common reason for joining an Episcopal church was that they had a friend who belonged to it. In maps of the distribution of religious adherents, the patterns can be explained, at least to some extent, by a number of factors, including rural/urban contrasts, historical associations and recent in-migrants to the state.

Unfortunately, the statistics in the Glenmary report do not include some historically African American denominations, such as AME Zion or Black Baptist churches. A major effort was made by the survey authors to include these denominations in the study but they do not keep records nationally. The magnitude of this omission is indicated by the fact that in 1990, when their statistics were reported, the AME Zion church in North Carolina had 312,693 adherents and Black Baptist churches included another 462,785 people. The total number of religious adherents in North Carolina represented 45.5% of the state’s population in 2000, less than the national average of 50.2%. No doubt the absence of these historically African American denominations caused the North Carolina proportion to fall below the national average. In fact, if the 1990 numbers for these two historically black churches are added to the 2000 totals for all other denominations, the North Carolina proportion of adherents would rise to 55% of the population, well above the national mean.

This is not to say that African Americans were totally excluded from this study because many of them are members of Southern Baptist, Methodist, Presbyterian, and other denominations. Nonetheless, the omission of historically African American denominations must be considered when analyzing religious adherence in areas of the state that have significant black populations.

Table 1 (below) provides statistics on the number of religious adherents in North Carolina and their growth between 1990 and 2000. They increased by 14.8% during that decade, a rate that was less than the statewide population growth rate of 21.4%. There is no way to know how the previously mentioned absence of the historically African American churches from these numbers might have affected this growth rate. Table 1 shows that there were nine denominations that reported at least 50,000 adherents each in North Carolina in 2000. They represented almost 83% of the total number of religious adherents reported for the state. Interestingly, these nine largest denominations, while adding over 300,000 adherents, grew by just 11.2%, in contrast with the 35% growth rate of all of the other religious groups. Table 1 also contains data on several other of the larger Christian denominations, as well as a number of non-Christian groups.

The Southern Baptist Convention is the largest religious body in North Carolina, accounting for fully half of the state’s number of religious adherents and one-third of the houses of worship. Otherwise, only the Catholic, Methodist, and Presbyterian (USA) churches accounted for more than 100,000 adherents each. In addition to the Catholic church growth, the Church of God (Cleveland, TN) and the International Pentecostal Holiness churches exhibited high growth rates.

The growth of these various religious groups is testimony to the increasing diversity of North Carolina's population. Most of the state's recent growth has come from people moving into the state from around the country and from overseas. Among the many things that they bring with them are their religious affiliations, as evidenced by the increasing number of Catholics and other faith groups that, until recent years, were only modestly represented in North Carolina. 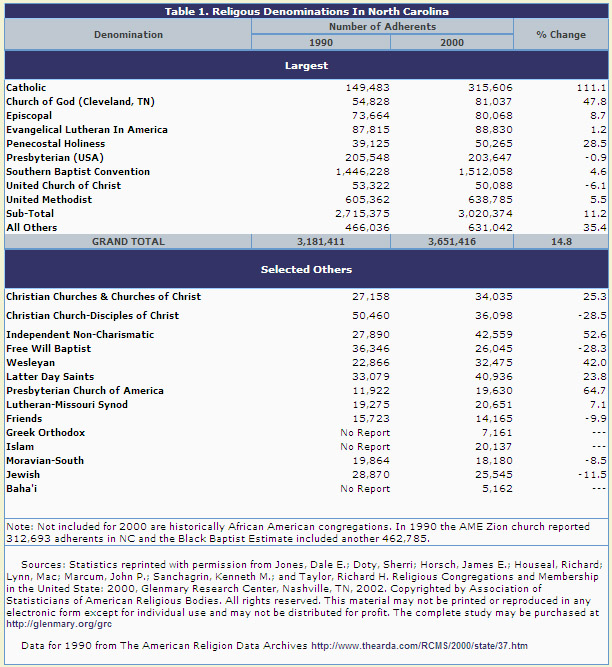 Table 1 statistics reprinted with permission from Jones, Dale E., et al. Religious Congregations and Membership in the United States: 2000. Nashville: Glenmary Research Center, 2002. Copyrighted by Association of Statisticians of American Religious Bodies. All rights reserved. This material may not be printed or reproduced in any electronic form except for individual use and may not be distributed for profit. The complete study may be purchased at http://glenmary.org/grc.

Data for 1990 from The Association of Religion Data Archives (ARDA) https://www.thearda.com/

Thanks Mario! Have a great

Thanks Mario! Have a great week.

I'd suggest the Baha'i link

I'd suggest the Baha'i link go to something like https://trianglewiki.org/The_Bahai_Faith_in_the_Triangle rather than to the BBC link.