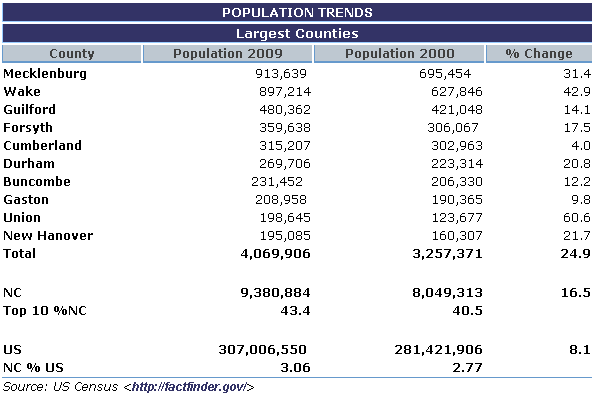 The state's vigorous growth was led by its largest urban counties. The 10 most populous, all parts of metro areas, grew from a total of 3,257,372 in 2000 to 4,069,906 in 2009, thereby increasing their share of the statewide total from 40.5% to 43.3%. This strong growth was led by the state's two largest counties, Mecklenburg and Wake. These two counties together saw their collective population increase by 36.8%, more than double the statewide rate. This led to their share of the statewide total rising from 16.4% to 19.3%.

By contrast , 17 of the smaller, mostly rural counties in eastern North Carolina, lost population during the nine-year period. Thus, the state's vigorous growth is being led by its larger urban counties.

North Carolina continues its vigorous growth, as shown by estimates prepared by the US Census Bureau (Figure 1). Total population reached an estimated total of over 8.7 million by July 1, 2005, a gain of 633,929 since the last census was taken in 2000. The 2000-2005 gain was the sixth largest among all US states and most of the other five states with greater increases had larger populations to begin with, including California, Florida and Texas. As a result of this growth, the state's share of the national total continued to rise, as noted in the North Carolina Atlas, rising from 2.67 percent of the national total in 1990 to 2.93 percent in 2005.