The African Methodist Episcopal Zion Church (AME Zion Church) traces its roots to 1796, when Peter Williams, Christopher Rush, James Varick, and other African Americans left the white John Street Methodist Church in New York City to form a black church. Five years later, the group was chartered as the African Methodist Episcopal Church ("Zion" was added in 1848). Unable to penetrate the white-dominated South during slavery, the AME Zion Church was primarily a northern institution for decades. It became known as the "freedom church" because of its efforts to help slaves escape from their masters, and because its membership included celebrated black leaders Harriet Tubman, Sojourner Truth, and Frederick Douglass. 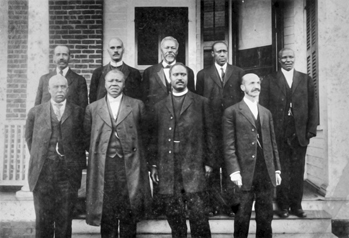 After the Civil War, congregations developed in many North Carolina towns, and by the late nineteenth century the AME Zion Church had achieved an important religious status in the state. In 1876 the Star of Zion, its official newspaper, was established to provide news and information on events in local churches, district and annual conferences, evangelistic efforts, educational meetings, and ecumenical participation. Since 1894 the organ has been published in Charlotte, which also is the home of the AME Zion Publishing House. Throughout its more than 125-year history, the Star of Zion has advocated greater citizenship rights and educational and economic opportunities for African Americans, who, the church teaches, carry much of the responsibility for their own progress. Prior to the election of President Franklin D. Roosevelt in 1932, the paper's political orientation had a Republican cast; since then, it has reflected the Democratic view of government as an ally in the fight for justice and equal rights for racial and other minorities.

In the early 2000s, more than 300,000 members of the AME Zion Church worshipped in approximately 600 congregations across North Carolina. The offices of the AME Zion general secretary and the publishing house are located in a Charlotte facility constructed in 1966 to replace a 1911 structure. The church also maintains six institutions of higher learning, including two in North Carolina-Livingstone College and Hood Theological Seminary, both in Salisbury.

Hi,
I am researching one of my ancestors Rev. A B Smyer who was appointed one of the first trustees in the incorporation of Zion Wesley Institute which was later named Livingston College. He also pastored churches in NC. I 'm hoping to locate a photo of Rev. A B Smyer and or the group photo of the board of trustees that includes him. Your assistance is greatly appreciated.

I hope your able to find the

I hope your able to find the information your looking for. I too am researching one of my ancestors Rev. J S Henderson. It the Star of Zion paper for mine he was appointed trustee at Greenville College in Tennessee. But I haven't found any info. He pastored many churches in NC, TN, and AL. And I have had no luck. Even on the trustee info all the other trustees were in a the 100 years book but not my ancestor. I tried to contact the Church too. If you figure out how please share what you did.

My first suggestion would be to check with the church first. Many churches have archives of their own records, so that would be a good place to start. My second suggestion is to check with Livingston College library. The library should have an archive or special collections that may be able to help.  Also, any historical societies for the area and local history museums

I am looking for information on the Star ofZion newspaper. I haven’t been successful. This is for my Black History project. I wanted to know while putting the paper together was there any problems with outsiders, and were there any struggles.

I am doing some genealogy

I am doing some genealogy work and I came across the deed to Mt Carmel Colored Church which sits on Martin family land in Mt.Olive NC. This church is part of the AME Zion denomination. I am trying to obtain any information about the church formation, original pastor and other church history.
Thanks in advance, Liz Meggett

Thanks for visiting NCpedia. There are a few online resources that might be of interest to you through our online catalog (https://statelibraryncdc.summon.serialssolutions.com/#!/search?ho=t&l=en...).

County Line AMEZ, Church in Union Spring Alabama...
Please Visit Us When You Can!