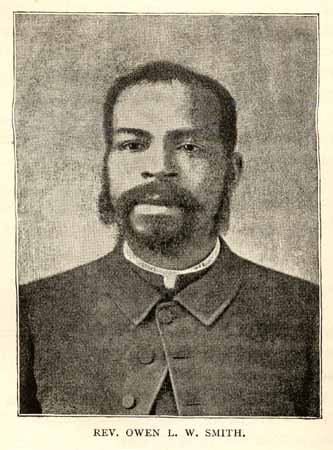 Owen Lun West Smith, U.S. minister to Liberia and Methodist leader, was born in Giddensville, Sampson County, the son of Ollen and Maria Hicks Smith, both of African descent. As a youth he served as a personal servant in the Confederate army and was present at the Battle of Bentonville in March 1865. Afterwards he followed the Union army across North Carolina and finally to Washington, D.C., where he is said to have been in the parade and review marking the end of the war. Making his way back home, he was sent by his mother to a school in New Bern taught by an African Methodist Episcopal Zion minister. After a time he moved to Pitt County to work on a carpetbagger's farm, where, on a part time basis, he also attended school under a northern teacher.

In May 1870 he set out for New Orleans but in South Carolina was engaged as a schoolteacher and for a time was a justice of the peace. Enrolled in the University of South Carolina, he studied law for about two years, but after 1877 blacks were no longer admitted. He was licensed, however, and practiced law briefly. Returning to North Carolina, he "engaged in politics" and taught school until 19 Oct. 1880, when he was "converted" at a camp meeting. Smith was licensed as a local preacher in the African Methodist Episcopal Zion Church on 3 Feb. 1881 and ordained a deacon in April. At various times he served circuits in Stantonsburg, Magnolia, Elizabethtown, Ingold, and Kinston and in Cumberland County. In November 1883 he was ordained an elder. Setting in Wilson in 1885, he became pastor of St. John's Church. An active financier, organizer, and church builder, he also served as the private secretary of his bishop for a number of years, secretary of the Sunday School Convention of the conference, and corresponding editor of the Star of Zion . He was elected presiding elder in January 1890 and reelected until 1894.

On 14 Jan. 1898 President William McKinley named Smith to the first of two terms as U.S. minister resident and consul general in Liberia, a post he filled until 23 May 1902. Also in 1898 Livingstone College in Salisbury awarded him an honorary D.D. degree. While en route to Liberia he spent some time in London, Oxford, and elsewhere in England.

Smith's first wife, Lucy Ann Jackson, whom he married on 9 Apr. 1878, was fatally shot by a deranged relative on 6 July 1891. They had no children. At Beaufort on 29 Jan. 1892 he married Adora Estelle Oden (1870–1906); their three children died young. In Liberia the Smiths adopted Carrie Emma Johnson, but she died at age seventeen while a student at Slater Normal School in Winston preparing to return to Africa as a missionary. Smith's third wife, whom he married in 1909, was Cynthia Ann King Isler, a widow with four children. He was buried in the private cemetery of Mount Hebron Masonic Lodge at Wilson.