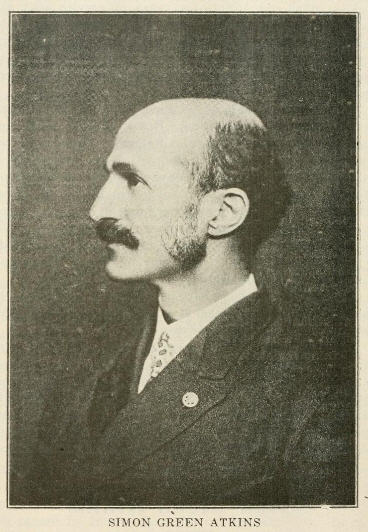 Atkins received his early schooling in Haywood. He was an astute student and progressed to teaching in the town school before he enrolled in St. Augustine's Normal Collegiate Institute, now St. Augustine's College, in 1880. After graduating from college, he took a teaching position in Chatham County. His aptitude was recognized, and he was brought to Livingstone College in Salisbury in the fall of 1884 by Dr. J. C. Price. There Atkins served as head of the grammar school department for six years and also, during the last two years, acted as the treasurer of the college. While associated with Livingstone College, Atkins spent his summers conducting institutes for black teachers in various North Carolina counties.

In 1890 the city of Winston offered Atkins the position of principal of the public school for blacks, and he accepted. Soon after arriving in Winston, he initiated a project to develop Columbian Heights, a neglected section of town, in order to provide blacks with better housing conditions and ownership of their homes. He himself moved to this development in 1892 and started a school there the same year. In 1895 he resigned from his position with the public school to work full time with his school, which by then was called the Slater Normal and Industrial School. It came under state supervision that year and received a legislative charter in 1897. The school grew rapidly and expanded under Atkins's leadership, until the state bought the property in 1905 and took full control.

During the following years, the curriculum of the school, under the guidance of the state board of education, was upgraded from high school level to include a two-year post-high school program. In 1925 the North Carolina General Assembly rechartered the school as the Winston-Salem Teachers' College, extending its curriculum to four years of college work and limiting its function to the training of teachers, supervisors, and principals for the black elementary schools of the state. Atkins continued as president of the college until retiring at the end of the spring term in 1934, because of poor health. After his death, his son, Francis L. Atkins, was elected his successor by the board of trustees.

Atkins was a member of the African Methodist Episcopal Zion church for fifty years. During twenty of these, he served as the church's secretary. He represented the church at three successive ecumenical conferences: 1901 in London, 1911 in Toronto, and 1921 in London.

Atkins was one of the founders of the North Carolina Negro Teachers' Association, organized in 1881. He served this organization for several terms as secretary and as president (ending in 1927).

Atkins married Oleona Pegram of New Bern on 3 Sept. 1889. Educated at Scotia Woman's College in Concord, she was a teacher.