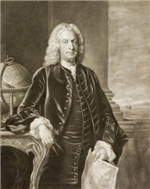 Colonial Governor Arthur Dobbs proposes legislation to establish "George City," a permanent seat of government in North Carolina. The legislation was not approved, but the city plans drawn up for George City would be used nearly 40 years later by William Christmas when laying out Raleigh.

The Wake County Charter was signed by Governor William Tryon.

General Assembly unsuccessfully attempts to have the permanent seat of government located in either Chatham, Johnston, or Wake County.

Resolution was adopted establishing Hillsborough as the seat of North Carolina government. It was rescinded the following year.

A motion was entered proposing that North Carolina's capital be established in Fayetteville, Hillsborough, New Bern, Salem, Smithfield, Tarboro, or on John Abernathie's plantation in Wake County. The motion was defeated.

General Assembly authorizes the Constitutional Convention to "fix on the place for the unalterable seat of government" (Battle 15). Prior to this, the General Assembly met in a different location in North Carolina each session. Legislators were known to travel hundreds of miles across the state to participate in the legislative process.

1788, August 4 - CAPITAL TO BE LOCATED NEAR HUNTER'S PLANTATION

The Constitutional Convention convened to vote on the acceptance of the proposed United States Constitution. They discussed establishing a capital in North Carolina and seven different locations were proposed as the seat of government. In the end, the Convention voted to that the General Assembly could select the location, as long as it was within ten miles of the plantation of Isaac Hunter. It is believed that Hunter's plantation was chosen as the location because his tavern was quite popular with the legislators who would stop for a drink while traveling to their next session.

During the 1788 Assembly meeting, a Cumberland delegate circulated a petition against the Wake County site, arguing that it was "unconnected with commerce" and would "never rise above the degree of a village" (Colonial & State Records vol 22, p 34). The petition was signed by 119 delegates.

A bill was presented before the General Assembly to carry out the Ordinance of 1788 and fix the seat of government. The bill was passed by the House, but narrowly failed to pass the Senate.

Another bill was presented to the General Assembly to carry out the Ordinance of 1788. This time, the bill passed. Ten commissioners were appointed to purchase land for the new capital.

The commissioners surveyed the properties of 16 different land-owners to identify the preferred location for the proposed capital. The commissioners had to vote twice before reaching a consensus to purchase the land of Wake county senator, Joel Lane.

The commissioners purchased 1,000 acres of land from Joel Lane for £1,378. Senator William Christmas, a surveyor, began laying out the new capital which was partitioned into 276 lots and totaled 400 acres. He based his plans upon those drawn up in 1758 for the proposed North Carolina capital, "George City," to be located near Kinston. George City was proposed during the administration of colonial governor Arthur Dobbs.  Though not original, Christmas's plan has been considered an excellent example of city planning for its time.

The North Carolina General Assembly selected the name "Raleigh" for the seat of government in honor of Sir Walter Raleigh, famous explorer and founder of the Roanoke Colony. 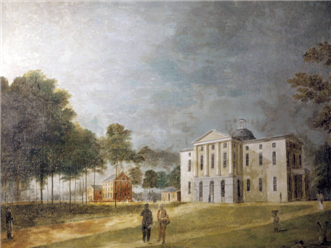 The General Assembly first met at the State House which was completed earlier that year.

After serving as North Carolina's seat of government for 3 years, Raleigh finally becomes a city. The General Assembly ratifies the first Raleigh City Charter, and seven commissioners are chosen to govern the new city.

Few settlers were initially attracted to Raleigh because of its then-remote location. As such, an act was passed requiring Raleigh to be the "common residence" of the Governor (Laws of North-Carolina 1798, Chapter XXVII). Whenever he departed town for more than 10 days, he was required to advertise the fact in "one or more newspapers of the most general circulation in the state" (Laws of North-Carolina 1798, Chapter XXVII).

The Raleigh Charter was amended to grant voting rights to city residents this including free African Americans, although they were not allowed to live in the city without permission of the city commissioners.

The remaining lots in the city were sold. The money raised from the sales was used to fund the redesign of the State House's exterior.

The State House burned to the ground as a result of a construction mishap. The fire destroyed many original government records, as well as the famous statue of George Washington crafted by Italian artist Antonio Canova between 1818-1820. A reproduction of the statue, can be seen in the current State House.

Following the fire that destroyed the State House, there was a movement to relocate the seat of government from Raleigh to Fayetteville. For several months, it seemed probable that North Carolina's capital might move again. In December of 1831, the uncertainty was put to rest when the Legislature passed an appropriations bill for $50,000 in order to reconstruct the State House on the same site in Raleigh.

Fascinating! I am the former

Fascinating! I am the former Director of the Joel Lane Museum House, and we have never heard of the plan for George City. Is there a scanned version of it and more info on where you found it? Thank you.

Thanks for visiting NCpedia and catching this!  Actually, this is not correct and I have updated the entry to be more clear.  George City was a planned city proposal during the administration of colonial Governor Arthur Dobbs, named to honor King George.  The city was drawn up to be located near Kinston, although it was never built.  The plans for George City were revived for a 1792 design of Raleigh by William Christmas. So, no plans as far as we know to name Raleigh "George City."  I'm sorry for the confusion but I have clarified the text.  And here's a link to the 1792 plans, which I'm guessing you already know about: http://digital.ncdcr.gov/cdm/compoundobject/collection/p249901coll26/id/...!