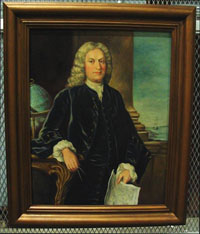 Arthur Dobbs (1689-1765) arrived at his post as royal governor with the colonies on the brink of war and brought with him the instructions, money and supplies to get North Carolina involved in any conflict. He was born on April 2, 1689, in Ayrshire, Scotland to Richard Dobbs and the former Mary Stewart. Only in Scotland temporarily, the family owned an estate near Carrickfergus, County Antrim, Ireland. At twenty-four, having served two years in the British army, young Dobbs returned to Ireland to oversee the estate. Dobbs married Anne Osburn Norbury in 1719, with whom he had three children, including Edward Brice who would accompany him to North Carolina. In 1762, he married fifteen-year-old Justina Davis, meeting with much ridicule.

Dobbs quickly rose to prominence, serving as High Sheriff of the county, mayor of Carrickfergus, a member of the Irish Parliament, and in 1733, the engineer and surveyor general of Ireland. Dobbs showed early interest in the colonies, believing that proper development and increased trade would help to support British and Protestant domination. More than philosophically interested in the colonies, the scientific-minded Dobbs was active in attempts to locate a northwest passage and then later was involved in colonial land speculation. By the 1750s he was responsible for about five hundred Protestant Northern Irish families immigrating to North Carolina.

He showed interest in a colonial governorship, expressing ideas for cultivating industry and advancing the British Empire. He was named governor of North Carolina in 1753 and arrived on its soil the following year, a vigorous sixty-six. Before reporting for duty, Dobbs met in Williamsburg with the governors of Virginia and Maryland about uniting forces against the French. He was warned about the weak and poorly equipped colonial militia, but brought money, arms, and the determination to alter their circumstances.

Dobbs was initially successful as governor, promoting unity, industry, military strength, and loyalty to the crown and the Anglican Church. Always trying to avoid the conflict between northern and southern factions, he attempted to establish the capital near centrally located Kingston (present-day Kinston). Although the assembly appropriated money to purchase the land for that purpose from Dobbs, at cost, the British government disallowed the plan. He finally settled on moving to Brunswick in 1758, where he built a home and encouraged the building of St. Philip’s Church.

The following year brought turmoil in the colony, due to the financial burdens of the French and Indian War and continued discord over the Granville Land District. Lord Granville was the only one of the original Lords Proprietors who refused to withdraw his claim to one-eighth of both Carolinas. The Granville District covered the northern half of North Carolina, and while not governed by the Earl Granville, the lands were granted by him and quitrents were due to him. Dobbs grew heavy-handed with the assembly of 1759 and dissolved the assembly of 1760 after they attempted to pass legislation creating paper currency for paying war debts. Losing popularity, Dobbs rekindled the north-south factionalism and sided with the southern politicians, who supported legislation for internal improvements.

After ten years’ service, Dobbs received a desired leave of absence in 1764, but died on March 28, 1765, shortly before his scheduled departure for Ireland. He died in the arms of his wife Justina, whom he had wed in 1762. Dobbs was buried at St. Philip’s Church at Brunswick, but no Anglican minister was in the province to lead the service.