by Kelly Kress and Philip McFee, 2006 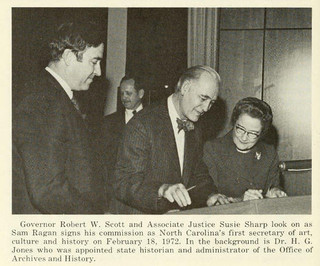 Sam Ragan (1915-96) was North Carolina's first secretary of the Department of Cultural Resources and first chair of the North Carolina Arts Council. Over the course of almost half a century, he helped lead North Carolina poetry into the contemporary period while bolstering the state's arts community in the process. Ragan also held the job of state editor for the Raleigh News and Observer, where he began writing his trademark column, Southern Accent, in 1948, becoming a household name through the newspaper, as had McNeil and Abernethy. Named poet laureate by Governor James B. Hunt in 1982, Ragan was the author of books including Collected Poems of Sam Ragan, Poet Laureate of North Carolina (1980), Journey into Morning (1981), A Walk into April: Poems (1986), and Listening for the Wind: Poems (1995).

A. R. (Archie Randolph) Ammons (1926-2001) grew up on a farm in Whiteville and began writing poetry while with the navy during World War II. His science studies at Wake Forest University later influenced his unique style, and his work was concerned with people's relationship to their environment; the problems of identity, permanence, and change; and the processes of nature. Ammons's books include Collected Poems, 1951-1971 (1972), Garbage (1993), Glare (1997), The North Carolina Poems (1994), The Really Short Poems (1990), and Selected Longer Poems (1980).

A like-minded verse stylist, Asheville's Jonathan Williams (1929-) has spent much of his life on Skywinding Farm near Highlands. In college, Williams identified with the rebellious and experimental works that characterized Beat poetry, drawing influence from music, painting, a love for the brilliantly quirky, and a piercing social eye. Williams calls on his association with the Black Mountain group of poets, who experiment with poetic presentation, and on Mountain speech and traditions, frequently quoting hill folk in his poems and essays. His books include Blues and Roots (1971; 1985), An Ear in Bartram's Tree: Selected Poems, 1957-1967 (1969), Elite/Elate Poems: Selected Poems, 1971-75 (1979), Get Hot or Get Out: A Selection of Poems, 1957-1981 (1982) and No-Nonse-Nse (1993). 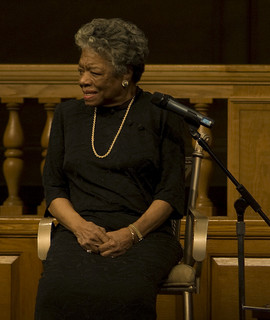 Born in St. Louis and raised in segregated rural Arkansas, poet, civil rights activist, and memoirist Maya Angelou (1928-) came to North Carolina to teach at Wake Forest University in 1981. While best known for novels such as I Know Why the Caged Bird Sings (1969) and Heart of a Woman (1981), Angelou has also written several books of poetry, including And Still I Rise (1978), Just Give Me a Cool Drink of Water 'Fore I Diiie (1971), and Phenomenal Woman: Four Poems Celebrating Women (1994). Angelou also wrote "On the Pulse of Morning," composed for and read at President Bill Clinton's first inauguration on 20 Jan. 1993.

Ronald H. Bayes (1932- ) was born in Freewater, Ore., and educated at Eastern Oregon State College and the University of Pennsylvania. He taught at Eastern Oregon State College and the University of Maryland before accepting the position of writer-in-residence at St. Andrews Presbyterian College in Laurinburg, N.C. Bayes founded and became executive editor of the St. Andrews Review and the St. Andrews Press and established the St. Andrews Writers Forum, a weekly event that brought outside writers and poets to the college for readings. Among his 16 books of poetry are 6 × 2: Six Poems (1966), Fram (1976), A Beast in View: Selected Shorter Poems (1985), and Guises: A Chainsong for the Muse: New and Selected Poems, 1970-1990 (1992).

Gerald W. Barrax (1933-) was born in Attalla, Ala., but spent much of his youth in Pittsburgh. He received his B.A. from Duquesne University in 1963 and earned a master's degree in English from the University of Pittsburgh before moving to North Carolina to join the English department of North Carolina State University. Barrax's interest in the experimental and political passions of the Black Arts Movement are apparent in his early poems, though he emphasized issues of family and community in later works. His poetry includes Another Kind of Rain (1970), An Audience of One (1980), The Deaths of Animals and Lesser Gods (1984), and Leaning Against the Sun (1992).

James Applewhite (1935-), from Stantonsburg, teaches poetry and creative writing at Duke Univeristy and has published essays on American poetry and southern literature. He is the author of many books of poetry, including Ode to the Chinaberry Tree and Other Poems (1986), River Writing: An Eno Journal (1988), and Daytime and Starlight (1997). Jim Wayne Miller (1936-96), born in Buncombe County, wrote extensively about Appalachian literature and the Appalachian experience. In 1980 he won the Thomas Wolfe Literary Award for his poetry collection The Mountains Have Come Closer. Other Miller works include Copperhead Cane (1964), Brier: His Book (1988), and The Brier Poems (1997).

Betty Adcock (1938-) is the author of five poetry collections, including Beholdings (1988), The Difficult Wheel (1995), and Intervale: New and Selected Poems, which was awarded the 2002 Poets Prize and named Distinguished Book of the Year by the Dictionary of Literary Biography Yearbook. She is the Kenan Writer-in-Residence at Meredith College. William Harmon (1938-) is the James Gordon Hanes Professor of English at the University of North Carolina at Chapel Hill. He is the editor of The Top 500 Poems (1992) and The Oxford Book of American Light Verse (1979) and the author of several volumes of poetry, including The Intussusception of Miss Mary America (1976) and Mutatis Mutandis (1985), for which he won the William Carlos Williams Award.

Shelby Stephenson (1938-) was born on a farm near Benson. He began to publish his own poetry in the spring of 1973, drawing on his youth in rural Johnston County for inspiration. His first book, Middle Creek Poems (1979), was the cowinner of the Zoe Kincaid Brockman Memorial Award. His other books include Carolina Shout! (1985); Finch's Mash (1990); The Persimmon Tree Carol (1990); Plankhouse (1993), a poetic documentary with photographs by Roger Manley; and Poor People (1998).

Former North Carolina poet laureate Kathryn Stripling Byer's (1944-) four books of poetry are Catching Light (2002); Black Shawl (1998); Wildwood Flower, the 1992 Lamont Selection of the Academy of American Poets; and The Girl in the Midst of the Harvest (1986). Byer grew up in southwest Georgia and earned her master of fine arts from the University of North Carolina at Greensboro. Past poet-in-residence at Western Carolina University and Lenoir-Rhyne College, Byer lives in Cullowhee. Community activist and poet Jaki Shelton Green (1953-) was born in Efland. Her poetry collections, which include Dead on Arrival (1983) and Conjure Blues (1996), focus on the experiences of African American women.

Michael McFee (1954-) was born in Asheville and received both his B.A. and M.A. from the University of North Carolina at Chapel Hill. He is currently Bowman and Gordon Gray Distinguished Professor of English at UNC-Chapel Hill, where he teaches poetry writing and contemporary North Carolina literature. McFee has published six collections of poetry, including Earthly (2001), Colander (1996), and Sad Girl Sitting on a Running Board (1991). He is also the editor of The Language They Speak Is Things to Eat: Poems by Fifteen Contemporary North Carolina Poets (1994).

While known primarily as a novelist, Duke University's Reynolds Price (1933-) has also written numerous volumes of poetry, including The Laws of Ice (1986), The Use of Fire (1990), and Vital Provisions (1982). Several North Carolina authors, among them successful Hendersonville-born novelist Robert Morgan (1944-), have published both verse and prose. Although Morgan has achieved more prominence as a novelist, his enthralling verse shines in poetry collections such as Zirconia Poems (1969), Bronze Age (1981), At the Edge of the Orchard Country (1987), Sigodlin (1990), and Green River (1991). Morgan is currently Kappa Alpha Professor of English at Cornell University. Born in Albemarle in 1939, Heather Ross Miller writes collections of short stories and poems as well as novels. She currently teaches creative writing and literature at Washington and Lee University in Lexington, Va., where she is the Thomas H. Broadus Professor of English, Emeritus. Her poetry collections include Adam's First Wife (1983), Hard Evidence (1990), and Friends and Assassins: Poems (1992).

Perhaps the most well-known crossover talent in the state is former North Carolina poet laureate and UNC-Greensboro professor Fred Chappell (1936-). Born in Canton and a graduate of Duke University, Chappell has written numerous collections of poetry, including The World between the Eyes (1971), C: Poems (1993), and Spring Garden: New and Selected Poems (1995). Chappell also writes a monthly poetry column for the Raleigh News and Observer. In 1987 he received the O. Max Gardner Award, the highest teaching award given by the University of North Carolina System. In 1988 Chappell was named the Burlington Industries Professor of English at UNC-Greensboro.