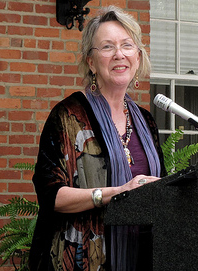 Byer served as a poet-in-residence at Western Carolina University in Cullowhee, North Carolina; University of North Carolina in Greensboro, and also in Lenoir–Rhyne University (formerly Lenoir–Rhyne College). Her work has appeared in distinguished poetry and scholarly journals, including Poetry, Georgia Review, Southern Review, and Hudson Review.

Slight clarification: The photo is from the NC 'Literary' Hall of Fame