Important Land Speculators of the Seventeenth and Eighteenth Centuries

Among the first land speculators to receive grants were Richard Averitt, Maj. George Pollock, William Little, John Lovick, and Edward Moseley. Averitt was in fact Sir Richard Everard, the last Proprietary governor, and Major Pollock was of the powerful Pollock family of the Albemarle. Little, Lovick, and Moseley were, with Christopher Gale, the North Carolina commissioners of the line dividing the colony from Virginia. They are familiar figures in William Byrd's two histories of that endeavor, and in the ribald version called Secret History of the Line they appear as Puzzlecause, Shoebrush, Plausible, and Judge Jumble, respectively. 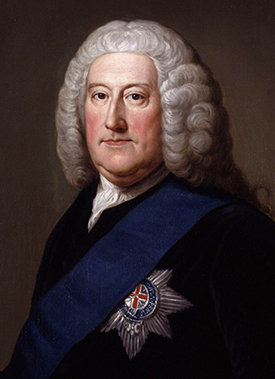 In 1729 the English Crown repurchased Carolina from the heirs of seven of the eight Lords Proprietors. John Carteret-the future Earl Granville-demurred, and his one-eighth share was declared and situated in a strip parallel to the Virginia line from which English mathematician Samuel Warner calculated latitudes for a depth of 60 miles. But the grant became mired in paperwork, and 15 years would pass before the Granville District was established with a granting office, surveyors, and collectors of quitrents. The Unitas Fratrum, the Moravian colony led by Bishop Augustus Gottlieb Spangenberg, bought the largest tract from Granville's agents, the 98,985 acres called Wachovia. Vestiges of the old Granville line may be discerned in the lateral borders of several counties in the middle of the state.

When North Carolina became a royal colony, George Burrington was named governor a second time. During his brief term as royal governor he managed to secure for himself much of the Hawfields-an area of red clay old fields of incomparable fertility, mostly in present Alamance County-which he still retained on returning to England after the installation of his replacement, Gabriel Johnston. Johnston also was aware of the value of the Hawfields, or soon was made so by William Byrd. Johnston arrived at his post in 1734 much indebted to a cartel of London investors, including his agent, the wily merchant Henry McCulloh, and even more to his mentor and principal employer, Spencer Compton, Lord Wilmington.

Next to Granville, McCulloh was North Carolina's greatest land speculator, controlling at one time well over 1 million acres in the Piedmont. His investments seem to have begun with a pair of grants on the northeast and northwest branches of the Cape Fear River. Of the latter, 60,000 acres adjacent to the Hawfields, it has been found that he was holding it in trust and that Lord Wilmington had earmarked it for Gabriel Johnston so that he might profit from the settling of it and thus repay some of his London creditors.

No correspondence exists between Johnston and McCulloh from this time, but evidence points to a vicious falling-out between these former allies. Their feud was apparently lifelong, and each party suppressed the other's grants of land, with Johnston getting his 60,000 acres on the Upper Eno only after he finally applied his signature and seal to the 1.2 million-acre McCulloh grant. By the time of that accommodation, in 1745, the Granville District was in place, seriously compromising between one-third and one-half of McCulloh's claim and all of Johnston's.

From Lord Granville, Johnston finally received in 1751 a tract of 8,929 acres on the Upper Eno, the center cut of his abortive 60,000-acre grant, and he had the surveyor William Churton subdivide it immediately. Whereas he had imagined his clientele to be French and Italian Protestants (Huguenots and Waldensians), his eventual customers were mostly Irish Quakers from Pennsylvania. Johnston had scarcely begun to sell the lots when he died, in July 1752, and John Rutherfurd (who married Frances, Johnston's widow) enjoyed most of the profits of the sales.

From the beginning, McCulloh had parlayed portions of his vast holdings to a second echelon of speculators, among them future governor Arthur Dobbs, George Selwyn, John Frohock, and John Campbell. Lord Granville died in 1763, and no more grants were issued from the Granville office. Ultimately, the unsold Granville and McCulloh holdings were confiscated by the new state of North Carolina and regranted. But for many years afterward, indeed long after the Revolution, the English heirs sought compensation for their losses in American courts.