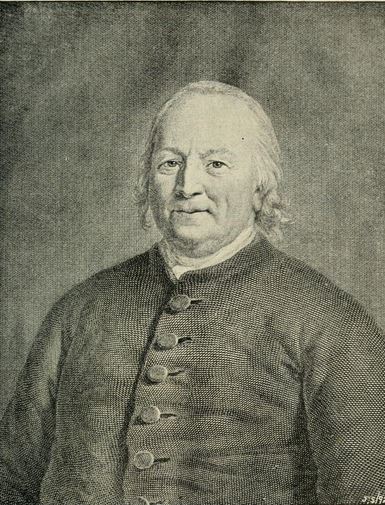 Augustus Gottlieb Spangenberg, bishop of the Moravian church, was born in Germany, the youngest of four sons of George and Elizabeth Nesen Spangenberg. His father was a Lutheran pastor. Augustus entered the university at Jena in 1722, and having been orphaned in 1714, he became a foster son in the home of Professor Johannes Franz Buddeus. Under the influence of Buddeus, Spangenberg changed his course of study from law to theology, was awarded an M.A. degree in 1726, and received an appointment as an assistant in theology at the university. About this time he became acquainted with Count Nicolaus Ludwig von Zinzendorf and the Moravians at Herrnhut and was much impressed with their missionary zeal. He was persuaded by the king of Prussia to take the chair of religious education at the University of Halle, but his adherence to the Moravians resulted in the loss of that position, and he went to Herrnhut to become Zinzendorf's assistant.

Spangenberg was responsible for carrying out Zinzendorf's plans for a mission in Surinam, and in 1735 he left for America to organize Moravian work in Georgia. In 1739 he made arrangements for the Georgia group to move to a site in Pennsylvania that he thought suitable for a mission center, and then he returned to Germany. Consecrated bishop at Herrnhaag in 1744, he sailed at once for America to become overseer of the Moravian settlement at Bethlehem, Pa. Internal politics caused the loss of his influence, and he was replaced by Bishop John Nitschmann. Spangenberg returned to London and engaged in writing defenses of Zinzendorf. Once the up-heaval over pietism had settled down, he was again sent to Bethlehem, where he found the colony in a sad state.

After a short visit to London, he returned to America to organize new work in North Carolina on land that Lord Granville had offered to Zinzendorf. Spangenberg and a survey party left Edenton in August 1752 and completed their search the following January, having chosen a location in the Yadkin Valley. In May 1753 Spangenberg reported to Zinzendorf in London and recommended that the property be purchased. Terms were negotiated with Lord Granville's agent, the title was vested in trust for the church, and purchase money was subscribed largely among members and friends in England. Governor Arthur Dobbs of North Carolina recognized Wachovia as a special Moravian district, known as Dobbs Parish. The name of Wachovia was given by Spangenberg after Austrian lands belonging to the Zinzendorf family.

In 1762 the new organization was complete, and Spangenberg, in poor health, returned to Herrnhut, where he remained for the rest of his life. All Christian groups in Europe recognized him as the leader of missionary work.

On 5 Mar. 1740, in Württemberg, Spangenberg married Mrs. Eva Maria Zielgelbauer Immig. She died in 1751, and on 19 May 1754 he married Mrs. Mary Elizabeth Jaehne Miksch. His second wife died at Bethlehem in March 1759. There were no surviving children from either marriage.

Spangenberg retired in 1790. He died in Berthelsdorf and was buried at Herrnhut.

Life of Augustus Gottlieb Spangenberg, Bishop of the Unity of the Brethren, 1855. Ledderhose, Karl Friedrich, 1806-1890. The Internet Archive: https://archive.org/details/august00ledd