Part 1: Diverse Currency and Severe Money Shortages in Colonial North Carolina; Part 2: Revolution-Era Currency and the Importance of North Carolina Gold Production; Part 3: The Civil War and the Nationalization of the Monetary System

Currency problems in various forms troubled North Carolinians until well into the twentieth century. During the eighteenth century, most North Carolinians rarely saw specie (gold or silver coins) at all, and even paper money was in short supply or considered unreliable. The American Revolution created new monetary demands, and the state of North Carolina authorized approximately nine separate issues of paper money to defray the costs of the war and the state administration from 1775 through 1785. The U.S. Constitution, which, among other things, prohibited the states from issuing paper money, was adopted in 1789 and ended the long history of North Carolina provincial and state paper money. 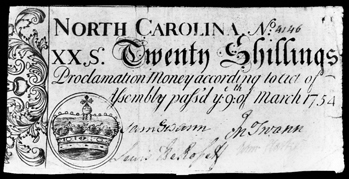 The Carolina colony's monetary unit was the British pound or pound sterling, and paper currency was valued in pounds, shillings, and pence. Pence (the plural of "penny") were valued at 240 pence to the pound. In 1755 Governor Arthur Dobbs suggested that the mint in England consider producing copper coins for use in North Carolina in denominations of half pence, pence, and two-penny pieces, using copper supplied by the colony. Although Dobbs submitted calculations demonstrating the advantages such a step would have on the colony's financial condition, the idea was rejected.

During the colonial period, the various British Navigation Acts were perhaps the foremost cause of North Carolina's currency problems. Under the acts, provinces such as North Carolina were expected to provide cheap raw materials and in turn furnish a captive market for Britain's more costly manufactured goods. This resulted in a flow of specie out of the colony to Britain, since North Carolina farmers and planters received relatively low prices for their agricultural products and raw materials and paid high cash or credit prices for imported finished goods.

To supplement the relatively small amount of English coins in circulation, coins from other countries were widely circulated. The most popular was the Spanish milled dollar, a large piece usually valued at four shillings sixpence in British currency. The French écu, the Portuguese crusado, and the rix-dollars of the Holy Roman Empire, Denmark, and the Netherlands, as well as other coins also circulated in the American colonies. Strands of seashell beads were one other type of money used by colonists, who adopted this medium of exchange-generally known as wampum-from Native Americans. Indians in this region made two distinct types of wampum: disk-shaped beads called "roanoke" and longer, tube-shaped beads known as "peak." In 1709 explorer and surveyor John Lawson recorded the common values of wampum in the Carolina colony.

A persistent lack of money prompted North Carolina and other colonies to print their own paper currencies and to rely on barter. In 1715 North Carolina's provincial government sanctioned a form of barter to sustain economic growth, approving the use of "the chief Produce of the Country" to pay public and private debts. Known as commodity money, this multitiered system had been used informally as early as 1694. In lieu of money, set quantities of tobacco, butter, tar, pitch, feathers, deer skins, beef, pork, whale oil, wheat, and other commodities could be used by citizens to pay their taxes and rents and to satisfy other expenses.

The North Carolina colony tried other means of increasing the supply of currency, or circulating medium. The legislature tried to increase the supply of coins, but North Carolina had no known supplies of gold or silver (until the discovery of gold near Charlotte in the 1830s), and Britain forbade the colonies to coin their own money. An available solution was to try to encourage the flow of coins into the province. As early as 1715, the North Carolina General Assembly declared the official value of British, Spanish, and other European silver and gold coins to be higher than their intrinsic bullion value in the hope that these coins would flow into the colony. This was not successful, however, since many British colonies were engaged in the same pursuit, and the British parliament subsequently made it illegal to rate coins at over one-third of their bullion value.

The most common and more successful solution, however, was the issue of fiat paper money, or "proclamation" money. Proclamation money was essentially a way of setting consistent values for the wide variety of currencies and commodities that served as money in the colony. To standardize this bewildering variety of currencies, the General Assembly would "proclaim" what the relative values of these kinds of money would be in North Carolina. In addition, proclamation money notes issued by North Carolina were essentially IOUs to cover the cost of necessary public works, such as fortifications. They were to be withdrawn from circulation when they were returned to the colony in payment of taxes, and the government would burn the bills they took in each year.

The need for funds to wage war against the Tuscarora Indians prompted North Carolina's government to issue its first paper money in 1712 (£4,000 in bills of credit) and more the following year. Since there was no printer in North Carolina at the time, all of these bills and others issued in 1715, 1722, and 1729 were handwritten. Thereafter, printed bills were used by the provincial government to pay its growing expenses, many of which related to the colony's defense. Appropriations of paper money were made by the General Assembly in 1748 to build two forts-one at Cape Fear, another at Ocracoke-to protect the coastal region from repeated attacks by the Spanish. The outbreak of the French and Indian War in 1754 prompted North Carolina again to issue £40,000 in bills to fund the construction of more forts and equip its troops.

The overissue and counterfeiting of paper money eroded public confidence in colonial currency issues. The disorderly effects of these paper currencies became so severe that Parliament's passage of the Currency Act of 1764 and further legislation in London in 1773 forbade nearly all forms of colonial money. By that time North Carolina had already issued more than £350,000 in paper.