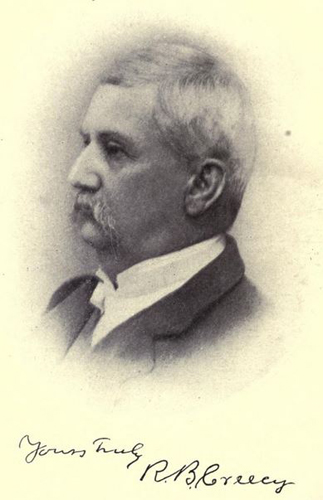 Richard Benbury Creecy, author and newspaper editor, was born at Greenfield Plantation near Edenton, NC. He was a son of Joshua Skinner and Mary Benbury Creecy. His grandfather was Lemuel Creecy, a Chowan County farmer and a member of the state senate for many years.

After the death of his parents and brief stay in Oxford, NC for schooling, Creecy attended the Edenton Academy and later Warrenton, where he was educated by Rev. John H. Saunders. Saunders and Creecy maintained contact after his schooling. He graduated from The University of North Carolina in 1831 with a degree in Law and Journalism. In 1837, he bought the total rights from his siblings to his family’s Greenfield Plantation, on the Yeopim River of Chowan County. He rented the home out beginning in 1842, eventually selling the property to Edward Wood in 1851. Creecy received his license to practice law in 1842. He then moved to Elizabeth City in 1843, where he lived for the remainder of his life.

On November 7, 1844, he married Mary Brosher Perkins, daughter of Edmund Perkins. According to Creecy’s papers, Edmund Perkins’s Cloverdale Plantation, located 14 miles south of Elizabeth City, was one of Pasquotank County’s largest plantations. It was also a property that relied on the labor of enslaved people. According to the 1850 census, there were 44 enslaved people on the Cloverdale plantation under Perkins in addition to the seven people listed as enslaved by Creecy.

By 1845, Creecy had shifted from practicing law to operating Cloverdale Plantation alongside Perkins. Until Perkins’ death in 1866, the two managed bonds and other assets together in Pasquotank County. They were also prominent antebellum Democrats, often attending pro-secession meetings throughout the state as early as 1859.

According to the 1860 census, Creecy, his wife Mary, and their children lived with Edmund Perkins on the Cloverdale Plantation, with Creecy listed as the head of household. Perkins formally transferred management of the farm to Creecy in 1863 due to his age. Creecy deeply valued his family, citing that the Bible spoke positively of large families, believing that a large family is equivalent to a “full quiver of arrows”, implying that a large family was fully prepared and equipped for any problems that may challenge them.

During the Civil War, Creecy did not fight due to his age but he was an outspoken supporter of secession and Confederate sympathizer for most of the war. During the war, he regularly wrote to his daughter Elizabeth Brosher Creecy Winston while she was attending St. Mary’s School in Raleigh, detailing key events from eastern NC during the Civil War. Concerning the Confederate defeat at Hatteras, Creecy declared it “an unfortunate disaster” as he claimed Hatteras was “the key to our country.” He claimed that those responsible for its loss would “be censured” and that there would be “consequences'' in the face of God. Creecy’s family vacationed in Nag’s Head regularly, and the family was there when Hatteras was captured by Union forces in August 1861.  Creecy wrote to his daughter that the family safely traveled from Nag’s Head back to Elizabeth City, where on the way they “heard the firing of cannons” by Confederate soldiers on Union soldiers on Hatteras Island.

Creecy also wrote to his daughter regarding the Union occupation of Elizabeth City in 1862. When the town was burned by Confederate troops retreating from Roanoke Island, Creecy noted in the subsequent days that “The town has been fired, and I do not know by whom.” He remarked that “A considerable portion of E. City burned,” and that “The town is doomed.” After the fires, Creecy detailed Union occupation of the city, often noting the presence of “Yankee steamers in the river” and “Yankee soldiers in the town.” He also noted that the Union soldiers were generally well-behaved, usually only killing “hogs or poultry” for supplies.

Despite his Confederate alignment, Creecy served on Unionist-Confederate peace committees that were sent to Raleigh to petition Governor Vance for peace towards the end of the war. From 1863 onward, Creecy sought peace in war-torn Pasquotank County and prioritized it over his allegiance to the Confederate cause.

The Creecy family remained on the Cloverdale plantation outside of Elizabeth City, but this did not shelter them from the effects of the war. Mary, Creecy’s wife, wrote that some of the enslaved people on Cloverdale “escaped” to the Union after the Emancipation Proclamation, and in July 1864, Creecy and his son Edmund were requisitioned for supplies by Union soldiers. They were passed over without any supplies being taken due to Creecy stating his pro-peace stance on the war, despite his teenage (15 or 16 at the time of the requisition) son’s Confederate uniform and involvement with John T. Elliot’s Confederate guerilla forces. A very different retelling of this incident was later published in Creecy’s Grandfather's Tales of North Carolina History, in the chapter titled “The Black Flag: Tales of Fraternal Strife.”

For a time, Creecy educated his children on the Cloverdale Plantation grounds. In 1872, Creecy left his farm life and returned to Elizabeth City to serve as editor for The Economist, a weekly paper first printed on February 14, 1872. The newspaper was founded by E.F. Lamb, a wealthy real estate baron of Elizabeth City. According to Creecy, the purpose of this paper was to counteract and undermine “the sad days of Reconstruction” in Elizabeth City and greater NC. Other notable people involved in the paper’s founding include: Governor Thomas Jordan Jarvis, Edward Wood, Louis Latham, David M. Carter, W.F. Martin, and Monroe Whedbee. Creecy, as editor, used the paper as a platform to discredit Reconstruction efforts and defame “carpetbaggers” and others with politics that did not align with Creecy and other editors. The paper also wrote at length to celebrate elections in which Fusion and Republican candidates had been defeated and openly celebrated the success of white supremacy in the state of NC’s elections.

The November 18, 1898 edition of the Economist proclaimed the Wilmington Coup as a victory of God’s divine punishment over those that are “corrupt and wicked,” with those being defined as corrupt and wicked being the progressive Republican and Fusion candidates elected during the 1898 election, including George Zadoc French. As editor of the paper, Creecy was also invited to deliver symposiums and write on subjects such as supporting the deregulation of the financial market and protesting laws and bills that supported market regulation on behalf of the Economist. Charles Brantley Aycock, future governor of NC, wrote to Creecy on occasion. They discussed state politics and the Economist’s opinions on subjects such as fusion politics. Creecy was well-known within the practice of journalism at the time, and his peers sometimes referred to him as the “Father of North Carolina journalism,” and the “Nestor of the press.”

On December 1st, 1903, the Economist published its first daily edition of the paper. Creecy retired soon thereafter in 1904 at the age of ninety-one. He continued to contribute to publications across the state. In 1906, his “Stray Leaves of Our History” address was published in University Magazine, a publication sponsored by the University of North Carolina at Chapel Hill.

Faith was important to Creecy, as a lifelong member of the Episcopalian church and he often cited God for positive things happening in either his or his family’s lives. Later in life, he became more complacent and disillusioned with political elections and the affairs of the “mortal world,” as he would “soon be leaving it.” He also referred to unemployment as “employment by the Devil,” and urged his family to work to avoid aspects of life which he viewed as ungodly.