William (Will) Andrew Wynne, bicyclist, professional baseball player, and radio pioneer, was born near the community of Neuse in Wake County, the son of William W. and Elizabeth Culbreth Wynne. In 1922 he opened a retail radio shop in Raleigh that he operated until his death. A man of many talents, he was fascinated as a youth by many of the inventions of the day—the telephone, the automobile, and the radio.

His first love, however, was sports. As a bicyclist he was a hero to the young boys of Raleigh. Will Wynne found out that he could do tricks with a bicycle that others could not and so became a contortionist and trick bicycle rider. In 1888 he won the National Trick Riding championship by defeating Harry Ward at Norfolk, Va. Wynne used a borrowed bicycle, whereas Ward rode a specially built nickle-plated one. In 1891 Wynne set a record for the longest bicycle trip—twelve days—when he pedalled from Raleigh to Portland, Maine, then a distance of 1,100 miles over dirt roads. He also staged exhibitions of his skill across the South and the East.

At the Southern Exposition in Atlanta, Ga., on 19 Nov. 1895, he rode a bicycle down the 500-foot incline of the shoot-the-chute and into a lake at the bottom of the track. He raced for time a shoot-the-chute boat with eight people in it. There was a clearance of only sixteen inches between the rails of the track on which he rode, and race officials clocked his speed at 75 miles per hour by the time he was midway down the incline. Wynne won the race but was knocked unconscious for three minutes. He went so fast down the last half of the course, he said, that he could not see or breathe. 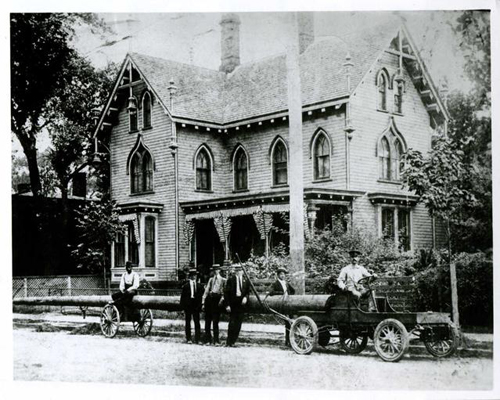 Once when he was in Washington, D.C., Wynne was inspired to ride his bicycle down the steps of the Capitol. Having done so successfully, he wanted to do the same at the Washington Monument. For that purpose he and some of his baseball-playing teammates smuggled a disassembled bicycle to the top landing of the monument, but just before they finished putting it together they were discovered by guards.

Wynne also enjoyed a baseball career. He pitched for professional clubs in Columbia and Charleston, S.C., Atlanta, Brockton, Mass., Wilkes-Barre, Pa., and, finally, the National League. His sports career got under way with the Raleigh Amateurs, and he once pitched seven games in six days—with an open gunshot wound in his right arm. In the 1890s there were no eligibility rules in collegiate athletics, and as a unique contribution he pitched for the Wake Forest team one afternoon and for Trinity College the next.

On the first afternoon he pitched for Wake Forest against Trinity at Durham and won 17–7. The next day Trinity was scheduled to play the University of Vermont, whose talented pitcher, "Doc" Pond, had recently been signed by the Baltimore Orioles. On the spot, Trinity hired Wynne. As a result, Trinity won 1–0, with Wynne scoring the winning run as well as pitching.

Wynne became the pitcher for the Washington club of the National League, the only major league in the country. He lost his first game as a major league pitcher, but it was not his fault. Wynne's team played Philadelphia, fourth-ranked in the twelve-team league, and lost 11–5. But only three of the runs were earned off Wynne, as he held Ed Dilahanty, the Babe Ruth of his day, hitless.

Not one to hoard his talents, he early added to his multiple careers that of telegraph operator, becoming superintendent of that service for the Norfolk Southern Railroad. The telephone also attracted him, and from his careful examination and study of pioneer instruments, he developed the only direct and instantaneous telephone system. After forming the Raleigh Telephone Company, he installed the first telephones in the city. In 1897 he built the first long-distance telephone lines in the state—from Raleigh to Goldsboro and from Selma to Dunn. When the Raleigh-to-Goldsboro line was connected, the first person to use it was Josephus Daniels, editor of the News and Observer. In time Wynne sold his telephone lines to Southern Bell.

When Henry Ford built his first car in 1903, Wynne promptly saw in it more than personal transportation. He built what is considered to have been the first truck. At a reported cost of $908.52, excluding labor, he constructed the truck using railroad wheels and employed it to haul coal and telephone equipment and as his own private car.

When radio sets began to appear in Raleigh in the 1920s, Will Wynne lost no time in taking some of them apart and putting them together again. He came to understand the mechanism and to recognize its potential. He opened the first shop in the area devoted exclusively to radio in 1922 and operated it until his death. Two years later he established the city's first radio station, WRCO [Wynne R adio Co mpany], which he sold to the Durham Life Insurance Company in 1929 after which it became WPTF ["W e P rotect t he F amily."].

Will Wynne married Mary Avera, and they had three daughters and a son—Elizabeth, who died young, Grace, Louise, and William Avera. He was buried in Oakwood Cemetery, Raleigh.