The Norfolk Southern Railroad was founded on New Year's Day 1883, with its original road running from Norfolk, Va., to Elizabeth City, N.C. Its predecessor, the Elizabeth City & Norfolk Railroad, chartered in 1870, had completed tracks south to Edenton on the Albemarle Sound in 1881. This was a continuation of a commercial connection between these points dating back to the Dismal Swamp Canal efforts of the late 1700s. In 1891 the road was reorganized as the Norfolk & Southern Railroad, but after 1900 consolidations brought back the name Norfolk Southern and the system was extended to New Bern, Raleigh, and Charlotte. 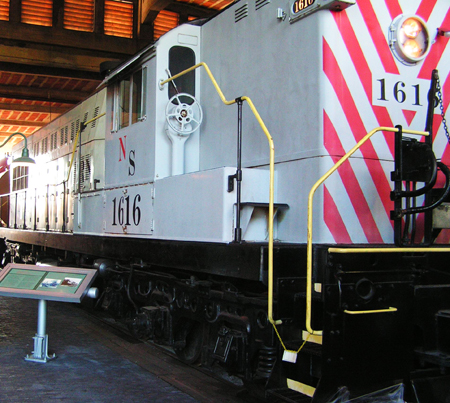 In 1907 work commenced on a five-mile trestle to cross the sound, which by January 1910 cost more than $1 million. The railroad lacked sufficient funds to adequately maintain the trestle, which perhaps led to its collapse in 1957-an accident that dropped a train into the sound and killed two crew members. But the trestle opened the way to connect with points in Piedmont North Carolina. Several of the state's smaller lines became part of the Norfolk Southern, including the Winston-Salem Southbound Railway, Raleigh & Western Railway (originally the Egypt Railway), Raleigh & Cape Fear Railway, North Carolina Midland Railroad, and Charlotte, Columbia, and Augusta Railroad. The line eventually ran from Norfolk to both Charlotte and Greensboro via Raleigh. In 1961 the company offices were moved from Norfolk to Raleigh.

In 1990 the Norfolk Southern Corporation leased the old Elizabeth City & Norfolk line between Chesapeake, Va., and Edenton, N.C., to RailTex, Inc., a short-line company based in Texas that began operating the line as the Chesapeake & Albemarle Railroad (C&A) under Norfolk Southern's "Thoroughbred Shortline Program." The 73-mile C&A was a member of the RailAmerica, Inc., family of railroads headquartered in Boca Raton, Fla., which also included the North Carolina & Virginia Railroad. The C&A linked up with the Norfolk Southern and another giant transportation company, CSX Corporation, at Norfolk.

Burke Davis, The Southern Railway: Road of the Innovators (1985).

"An act to change the name of the Elizabeth City and Norfolk Railroad Company to the Norfolk Southern Railroad Company." Laws and Resolutions State of North Carolina Passed By The General Assembly Session Of 1883. Raleigh, N.C.:  Ashe and Gatling. 1883. http://digital.ncdcr.gov/u?/p249901coll22,198957 (accessed August 1, 2012).