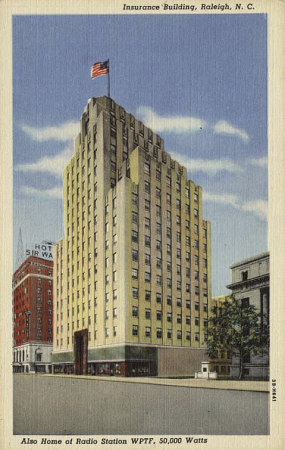 Originally, Durham Life wrote industrial insurance to provide low-income people with limited protection in the event of sickness, accident, or death. As the company name suggests, the firm also sold industrial life insurance with somewhat larger premiums than for accident and health policies, including credit and group insurance. As the company grew, it added a wide range of life and accident and health policies.

In 1927 Durham Life purchased radio station WPTF, originally owned by Will A. Wayne. Its call letters stood for "We Protect the Family," which the company had adopted as a slogan in 1914. In 1929 the company established a policy-still in effect-to have WPTF broadcast a live church service every Sunday. Beginning in 1933 the station operated as WPTF Radio Company (later Durham Life Broadcasting, a Durham Life subsidiary). In 1972 the broadcasting company changed the call letters of its FM station to WQDR-FM, and in 1977 that company acquired WRDU-TV and renamed it WPTF-TV.

Corporate changes would eventually take Durham Life out of broadcasting. In 1979 Durham Corporation, a holding company based in Raleigh, was incorporated, and effective 31 December of that year Durham Life became its wholly owned subsidiary. In July 1991 FSF Acquisition Corporation became the new owners of WPTF-TV and the call letters became WRDC (in 1995 they were again changed to WNCN). Durham Corporation merged into Capital Holding Corporation (Raleigh) in 1991. In 1996 Providian Corporation, formerly Capital Holding, sold its Durham insurance operations to the major Dutch firm Aegon.

"Durham Corporation: It's a New Holding Company for Mature and Honored Firms," We the People of North Carolina 39 (November 1981).