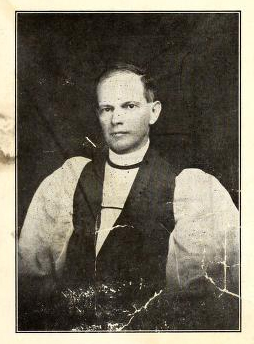 Robert Strange, Episcopal bishop, was the grandson of Judge Robert Strange, a U.S. senator from North Carolina, and the son of Colonel Robert Strange, an army officer and attorney of Wilmington, and his wife Caroline, the daughter of Thomas Henry Wright. He was baptized in St. James's Church, Wilmington, by the Reverend Dr. Robert B. Drane and educated in the schools of Wilmington, at Horner and Grimes Military Academy, Hillsborough, and at The University of North Carolina, from which he received a B.A. degree in 1879. He was prepared by the Reverend Robert B. Sutton, D.D., of Pittsboro for his confirmation on 20 Nov. 1877 in the Chapel of the Cross by Bishop Thomas Atkinson. For a short time Strange tutored the children of Mrs. Edmund Ruffin, Jr., of Hanover County, Va. Admitted as a candidate for Holy Orders in 1880, he studied at the Berkeley Divinity School in Connecticut and was ordained deacon by Bishop Alfred Watson in April 1884.

After serving as a missioner among the African Americans of Brunswick County, Va., in response to an appeal by Mrs. Pattie Buford, and traveling in Europe, Strange returned to North Carolina and was advanced to the priesthood by Bishop Theodore Lyman on 15 Nov. 1885. He was successively rector of the Church of the Good Shepherd, Raleigh (1885–87), St. James's Church, Wilmington (1887–1900), and St. Paul's Church, Richmond, Va. (1900–1904). Elected bishop coadjutor of East Carolina on 26 May 1904 and consecrated on 1 November in St. James's Church, he became the diocesan in April 1905 on the death of Bishop Watson.

Building on the sound foundation laid by his predecessor and preserving traditions of which he was a product, Bishop Strange ably led the diocese to an awareness of changing times and opportunities for the Episcopal church, at home and abroad. He was a member of his church's Joint Commission on Social Service, of the American Red Cross, and of the University Peace and International Arbitration movements. His administration was characterized by his efforts to reduce sectarianism; support education, with a special interest in The University of North Carolina, which awarded him an honorary D.D. degree in 1894; strengthen the missionary program of the diocese; enhance the status of the work among African Americans, including appointment of a black archdeacon in 1909; and stimulate the spiritual resources and social responsibility of clergy and laity. Eloquently by word and deed he set forth the high principles that motivated his life.

Despite periods of rest and recreational travel, the bishop's health became impaired in carrying out the demands of his active mind and dedicated spirit. In November 1913 he turned over the ecclesiastical authority to the standing committee. Death came for him the following August, and he was buried beneath the chancel of St. James's Church. A portrait of Bishop Strange, painted by Mrs. Helen McMillan Lane, was presented to the parish house of St. James's by her aunt, Mrs. William Latimer, in 1945.

Surviving Strange were his wife, Elizabeth Stone Buford, whom he married on 29 Sept. 1886, a son Robert, and a daughter Helen. Mrs. Strange was the daughter of Judge Francis E. and Pattie Buford, the granddaughter of Governor David Stone.

Haywood, Marshall De Lancey. Lives of the bishops of North Carolina from the establishment of the episcopate in that state down to the division of the diocese. Raleigh, N.C.: Alfred Williams & Company. 1910. https://archive.org/details/livesofbishopsof00hayw (accessed April 4, 2014).