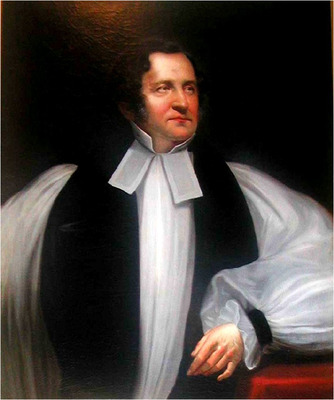 Thomas Atkinson, third Episcopal bishop of North Carolina, was one of eleven children of Robert and Mary Tabb Mayo Atkinson of Mansfield, Dinwiddie County, Va., and one of four brothers who became Episcopal or Presbyterian clergymen. A younger brother, Joseph Mayo, entered the Presbyterian ministry and followed Thomas to North Carolina.

Born on his father's plantation and educated in local schools, Atkinson entered Yale College at age fourteen. During his junior year, following a student spree on which he refused to serve as informant, he was forced to leave or be expelled. He then entered Hampden-Sydney College, from which he was graduated in 1825 with top honors of his class. After three years of study under Judge Henry St. George Tucker of Winchester, Va., Atkinson was licensed to practice law, a vocation he pursued successfully for eight years. Following the course of many another lawyer during his lifetime, Atkinson decided to enter the ministry in 1836. Ordained a deacon on 18 Nov. by William Meade, assistant bishop of Virginia, he served on year as assistant rector of Christ Church, Norfolk. Upon his advancement to the priesthood on 7 May 1837 by Richard Channing Moore, bishop of Virginia, he became rector of St. Paul's Church, Norfolk. During the next sixteen years he served successfully as rector of St. Paul's, Norfolk (1837–39); St. Paul's, Lynchburg (1839–43); St. Peters, Baltimore (1843–50); and Grace Church, Baltimore, a church he organized (1850–53).

During his tenure in Baltimore, Atkinson was twice elected biship of Indiana (1843, 1846), an honor that on both occasions he declined. Although in 1843 he rejected the election on the grounds that he was ill-prepared for the office of bishop, three years later he declined because he did not wish to live in a community inflamed with hatred for slavery and slaveholders. Despite the fact that he disliked abolitionism, he had years earlier freed his own slaves and expressed a preference for living in the slave South in order to serve as a meliorating influence. When he was nominated in 1853 to become bishop of South Carolina, his prompt expression of opposition to slavery cooled South Carolinians toward his election. In May of the same year, however, he was elected bishop of North Carolina, following thirty ballotings by a sharply divided North Carolina diocesan convention. On 17 Oct. 1853, Atkinson was consecrated at the General Convention of the Protestant Episcopal Church in New York. Succeeding Levi S. Ives, who renounced his episcopate to become a Roman Catholic, Atkinson remained North Carolina's Episcopal bishop for twenty-eight turbulent years. 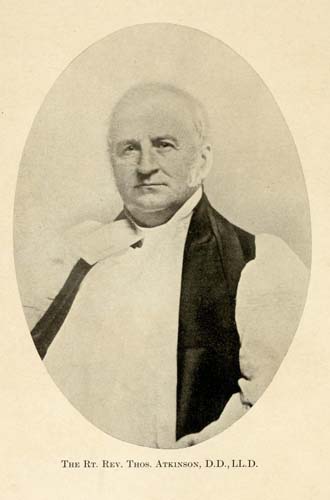 As the Civil War approached, Atkinson provided enlightened and moderate leadership for North Carolina's Episcopalians. He promoted education by founding a church school for boys in Raleigh and the Ravenscroft School in Asheville. He urged the religious instruction of slaves throughout the state. He argued effectively against using theories of Negro racial inferiority as a basis for defending slavery. Until Lincoln's call for southern troops to suppress the rebellious South, Atkinson opposed secession in word and deed. Thereafter, however, he put the Episcopal church in North Carolina in the service of the Confederacy. While he was initially opposed to a similar severing of the Protestant Episcopal Church, by October 1861 he came to support southern moves to erect a Protestant Episcopal Church in the Confederate States of America. At the conclusion of the war, he continued his moderation by becoming one of only two southern bishops to attend the Philadelphia general convention in October 1865 and to participate in plans for the reunification of the church. Soon thereafter, Atkinson announced his intentions to make North Carolina a model for dealing with the problem of freed blacks. In 1866 he placed the operation of black Episcopal churches fully in the hands of black clergymen. Two years later he led the move to open the Episcopal school for blacks near Raleigh that eventually became St. Augustine's College.

When his health failed in 1866, Atkinson traveled widely in America and Europe to recover the vibrancy of his earlier years. Such travels brought him to the international Anglican conference at York, England, in 1866; the First Lambeth Conference at Lambeth Palace in 1867; and to Cambridge University, where he received an honorary doctoral degree, also in 1867. Atkinson's health continuing to decline, Theodore Benedict Lyman was elected his assistant bishop in 1873. Atkinson died in Wilmington, where he had made his home since 1855. He was survived by Josepha Gwinn Wilder, daughter of John Wilder of Petersburg, Va., whom he had married in 1828 and by whom he had three children.

Thomas Atkinson, 1807-1881, Extract from the Annual Address of the Rt. Rev. Thomas Atkinson , D.D., to the Convention of the Diocese of North Carolina, Holden at Morganton, July 10th, 1861. [Raleigh, N.C.?]: Printed at the Office of the Church Intelligencer, 1861. Documenting the American South, UNC Libraries: https://docsouth.unc.edu/imls/atkinsonaddress/menu.html

Thomas Atkinson. From the Bishops of the Episcopal Diocese of North Carolina. Available from http://www.dionc.org/bishop-biographies.html (accessed February 7, 2013).